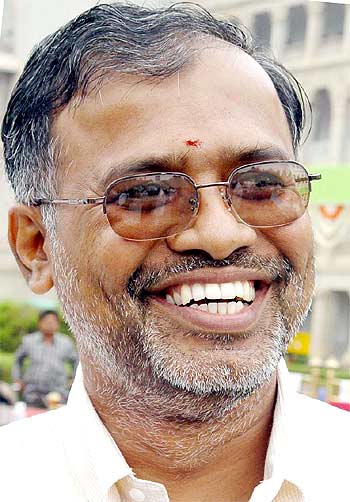 The crisis was not a sudden development says state Law Minister Suresh Kumar, who is known for his robust Rashtriya Swayamsevak Sangh affiliations.

Though Suresh Kumar does not have a solution to the current deadlock, he says it is time the state BJP took the RSS's advice to resolve the dispute.

In an interview with rediff.com's Vicky Nanjappa, the minister feels the BJP is "committing suicide" in Karnataka.

How do you assess the situation now?

It is a sad scenario. It is going from bad to worse.

Don't you think the BJP is losing ground everywhere?

Yes, there appears to be a problem. The crisis started after the unexpected 2004 Lok Sabha poll defeat. The cohesiveness for which the party has always been known for is missing after that defeat.

In Karnataka, the scenario is different. Overcoming many troubles, we rose to power. But we encounter a different problem. We have several BJP ministers, but I am not sure how many really belong to the party -- in the strictest term.

What is the reason for the crisis?

It was not sudden. The dissent was brewing right from the beginning. It is our fault that we did not read it too well. We should have taken those messages of dissent seriously. Had we done that, things would have been normal now.

Where is it headed now?

One faction may win, the other may lose. But in the end, the BJP will be the biggest loser. All I can say is that the party is committing suicide.

What does the RSS say about the stalemate?

I have spoken to RSS leaders and they feel it is high time that the gap between the party and the government was filled up.

There is talk that the RSS has lost complete control over the BJP.

It is not a fair judgment. The RSS has 35 affiliated organisations and it has to take care of that too. The RSS does not poke its nose in political affairs. The RSS won't interfere unless a specific opinion is sought.

Having said that, I think it is time that we sought the RSS's views.

The BJP has always been a cadre-based party. Do you think it was a mistake inducting outsiders like the Reddy brothers into the party?

That is incorrect. There are many in the BJP who are not from the RSS. What the BJP expects is discipline from every member. I was fortunate that I was from the RSS which helped me discipline myself.

The important thing is that if s/he has an RSS-imbibed discipline to be in the party.

Coming back to the crisis, what went wrong?

Several BJP MLAs are currently based in resorts in Hyderabad and elsewhere. What happens after this problem is solved? How can these MLAs face the people who elected them?

Yes, that is true. Their image has surely taken a beating. I don't understand why they sought refuge in resorts.

It is strange that a culture which was started by (then er Andhra Pradesh chief minister) N T Rama Rao is still in vogue. The MLAs should have continued working for the people instead of huddling in a resort.

What will happen if the high command decides to change the state leadership?

In 2008, when we sought the mandate, B S Yeddyurappa was the party's face. In fact, his was the only visible face. People in other camps forgot Yeddyurappa's key role in the victory. They forgot that had the chief minister not toured their respective constituencies, they would not have won the elections.

Yes, if the leadership is changed, the party's image will take a beating. That will be a huge setback.

Any chances of a coalition government with the Janata Dal-S?

That is more of an imagination. Both parties are aware of the soured relationship that they share. We have sought votes during the last election on the issue of betrayal by the JD-S. How can we meet the people again if we form an alliance with the JD-S?

What is your message to the warring factions and the high command?

I want the issues sorted out immediately. People gave us a mandate for the very first time and we should live up to their expectations. People are fed up of elections and politicking.

The middle class has an apathy towards politics and we do not want to run the risk of losing out on this section. This Vikram and Betal story (referring to folklore) in the BJP has to end. However, I don't want to specify who is Vikram and who Betal is (laughs).

Yeddyurappa to continue as Karnataka CM