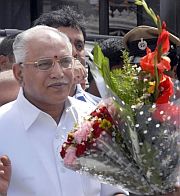 There appears to be no solution in sight to the ongoing crisis in the Karnataka unit of Bharatiya Janata Party.

There are deep cracks even as the party is yet to complete two years in the government.

It is hard to believe that Chief Minister B S Yeddyurappa, who was seen as the undisputed leader of the BJP and was credited for bringing the party to power single-handedly in the state.

However, the honeymoon was short lived and the BJP in Karnataka now faces its worst crisis ever, thanks to a fight between the chief minister and the Reddy faction.

Sources in the Reddy faction and the BJP say that it is the coterie that brought about Yeddyurappa's downfall.

Though known for his leadership skills and his excellent administrative skills, it is also accepted that Yeddyurappa was so interested in protecting his coterie that it may cause his downfall now.

The Reddy brothers -- Janardhan Reddy, Karunakar Reddy and Somashekhar Reddy -- who constitute the mining lobby have been a nightmare for Yeddyurappa. Not to forget B Sriramulu, who the Reddys call as their fourth brother.

When the BJP formed the government with the Janata Dal-Secular on a 20-month sharing basis, the Reddy brothers threatened to bring the government down by exposing a major bribery scandal.

They alleged that the then chief minister H D Kumaraswamy had asked them for a bribe, and claimed that they even had the incident recorded in a video.

The BJP managed to sail over the crisis and just when it was time for the JD-S to hand over power to the BJP and make Yeddyurappa the CM, Sriramulu alleged that Kumaraswamy had tried to kill him.

The JD-S used this as an excuse and refused to hand over power.

Exactly a week later, they pulled out of the government, with which the BJP had no choice but to face the elections.

This time, the BJP came to power on its own. However, soon minor skirmishes emerged between the Reddys and Yeddyurappa.

Where it all began

The first signs of dissent were seen within the BJP, when the CM went ahead with the much-publicised Operation Lotus -- in which he tried to woo MLAs from both the Congress and the JD-S.

Sensing dissent, the CM called off the operation.

Over the past few months, Yeddyurappa, in a bid to cement his position within the party, he started to build his own coterie - which included state ministers Shobha Karandlage, Dr V S Acharya, MLA Basavaraj Bommai and his personal secretary V P Baligar.

Gradually, as the coterie began playing power games, the Reddy faction opposed the proximity of these leaders to the CM.

A member of the Reddy faction, Renukacharya, MLA, said the crisis began due to the autocratic behaviour of the Cheif Minister, who was not approachable to any of his MLAs and did only what his coterie said.

Further, the Reddy faction also raised concerns over the role played by Baligar who they felt was playing the role of an intermediary between the CM and other MLAs.

There have been many occasions, according to the Reddy faction, when Baligar has advised the CM against the Reddys.

Another reason for the crisis was the constant interference by Yeddyurappa in Bellary  -- the bastion of the Reddys.

To the chagrin of the Reddys, Yeddyurappa introduced a toll on mining trucks, which hurt the business interests of the brothers. Despite several appeals, the CM refused to budge.

Also, Yeddyurappa effected several transfers of both police and forest officials in Bellary who he thought were cozying up to the Reddy brothers.

The other factor that led to the dissent was the CM's proximity to Shobha. There were complaints from across the party that the CM gave her undue importance, and was almost like a de facto CM.

The last straw was when Shobha, during a recent visit to Bellary, reviewed the performance of the revenue department, a portfolio held by Karunakar Reddy.

The piled-up issues finally turned into a major power tussle that remains unsolved in the past two weeks. The war was declared out in the open, and both factions tried to gain a stronghold over north Karnataka, BJP's primary base.

The Reddy brothers decided that the best way to cut the chief minister to size would be by taking over north Karnataka, the CM's bastion.

The floods and rehabilitation works that followed provided further opportunity to the Reddys to get the better of the CM.

The Reddys collected up to Rs 500 crore from the mining lobby and decided to build 5,000 houses for flood-affected victims.

Hearing this, the CM was a worried man and sensed that the Reddys were trying to become the heroes in north Karnataka. He tried stopping the work, however the Reddy faction went ahead with the inauguration of the flood relief works without the CM.

The Reddys got down to business and began wooing MLAs.

There is also an Ananth Kumar-factor that has been doing the rounds.

Although the BJP high command has denied this, sources in the party have been talking about a secret meeting between the former Union minister and Speaker Jagadish Shettar, the CM candidate of the Reddys, on October 25, which is said to have allegedly engineered the crisis.

Also, party sources say Kumar may have been eyeing for the CM's post.

Kumar believes the high command would not accept Shettar as the CM and would instead propose him for the post. Kumar has the support of a large number of BJP MLAs, including the Reddy faction.

Currently, the Reddy faction claims to have the support of nearly 70 MLAs, which may be enough to make the high command take notice.

All that the high command can do is to convince the Reddys to work on a solution and let Yeddyurappa be the leader.

The high command is well aware that Yeddyurappa must continue as the CM for the party's welfare for he is undoubtedly the favourite among voters in the state BJP.

The Reddy faction has on their side important leaders such as Shettar and K Eshwarappa, who have had a long innings with the party.

The Yeddyurappa camp, which has lost several MLAs, has with it Dr Acharya, Shobha and Suresh Kumar. This camp also enjoys the support of state BJP president Sadanand Gowda and former Union minister Dhananjay Kumar. Moreover, the high command too is very much on Yeddyurappa's side and has been vouching very strongly that he continue as the CM.

However, for Yeddyurappa's camp this is of no consequence as they have already lost a majority of the MLAs to the Reddys.

It is strange that despite Yeddyurappa agreeing to accept all the demands, the Reddy faction does not want to yield to a middle path.

The Reddys have told the high command either to remove Yeddyurappa, or face the music. While the Reddy loyalists say they have no faith in the CM, the Reddy faction too has committed to them that they would bring about the change in leadership.

So, to keep the MLAs on their side, the Reddys will have to keep their word.

For the high command, the road ahead is tough. They are torn between the public support Yeddyurappa enjoys and the support of the MLAs that the Reddys have.

The high command has put forth several options, but the Reddy faction has not budged  all they want is a change in leadership in Karnataka.