No flip-flop on Telangana: Chidambaram 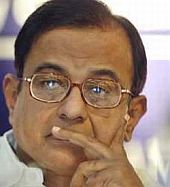 Dismissing the charge of 'flip-flop' on the part of Centre on Telangana issue, Home Minister P Chidambaram on Thursday said the January 5 meeting of political parties from Andhra Pradesh is to devise a "mechanism and roadmap" on resolving the problem.

"The January 5 meeting is the first step in the consultations. In the first step, we have called the recognised parties in the state to devise a mechanism and a roadmap (on the issue," he told a press conference, the state chief minister has been invited to the meeting in his official capacity.

He said as the consultation process progresses the issue of involving people beyond the 8 recognised parties could be thought of.

Referring to the two statements he had made on December 9 and December 23 on the issue of separate Telangana, Chidambaram said there has been criticism that there has been a flip-flop on the part of the Central government.

Recalling the history of the issue, Chidambaram said the National Common Minimum Programme of the United Progressive Alliance in 2004 had said the government would consider the demand for the formation of a Telangana state at an appropriate time after due consultations and consensus.

Major political parties in Andhra Pradesh contested the 2009 assembly elections on manifestos that, in one manner or other, declared support for the formation of a separate state of Telangana.

He referred to the all party meeting convened by Andhra Pradesh Chief Minister K Rosaiah on December 7 in which all floor leaders of the political parties agreed to support the proposal to adopt a resolution in the state assembly for the creation of Telangana.

The CPI-M had a different view and the MIM said the appropriate forum for expressing its views would be the assembly.

The Centre received the minutes of the meeting on December 8 and on 9 the government decided to initiate the process of forming the state of Telangana.

"In the background of the minutes of the all party meeting, I would like to ask, "what was wrong with that statement," he asked.

However, Chidambaram said following the announcement major political parties in Andhra Pradesh witnessed deep divisions among their members, especially MPs and MLAs. It was obvious that the situation has altered.

"The government tried its best to bridge the differences. Unfortunately, there was no agreement and it was felt that there was a need to hold further consultations with all political parties and groups in Andhra Pradesh.

"Hence another statement was made on behalf of the Central government on December 23, 2009 emphasising the need for wide-ranging consultation and promising to take steps to involve all concerned in the process," he said.

The minister said he could not understand why this was described by the media as a flip-flop. "There was no flip-flop on the part of the Central government. Government was simply responding to the altered situation as a result of divisions in the political parties," he said.

To a question on 'U-turn' of political parties including Congress, TDP, Praja Rajyam, he said he would not agree with that view.