'The people of Telangana are treated as second-rate citizens' 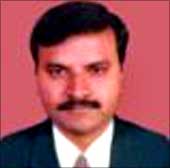 When Jawaharlal Nehru announced the formation of a united Andhra Pradesh, he commented, "an innocent girl called Telangana is being married to a naughty boy called Andhra. It is their choice to continue or to get separated."

Today the people of Telangana say that the innocent girl can no longer stay married to the naughty boy. Several proponents of the movement say that it is high time their 'state' is given back to them.

Dr Srinivas Raj, one of the leaders of the Telangana movement, has prepared a ready reckoner on the issue. Raj along with several others has been distributing this booklet among the people of Telangana and convincing the people why this movement is important and how their lives would change once Telangana is created.

In this interview with rediff.com's Vicky Nanjappa, Raj gives an interesting insight about the movement for a seperate Telangana. He also goes into length about the backroom politics that is being played in trying to curb this movement.

Could you give us a brief history of the Telangana movement?

We talk of Jalianwala Bagh with such great interest. No one wants to even think of the massacre that took place in Telangana, when the Nizam was ruling us. The Hyderabad state was under the Nizam and Urdu was the official language at that time. Right from that time, the people of Telangana were being suppressed. The Nizam's army butchered the people of Telangana who fought for their rights and there were at least 6 Jalianwala Bagh-like incidents at that point of time. The problem is that we continue to get suppressed even today and that is why we feel that a separate state is required.

You had a separate state, then what happened?

Hyderabad had several industries including two airports. A lot of attention was foccused on the Telangana region and this area had a lot of infrastructure. Time magazine had in 1937 featured V Usman Ali Khan as the wealthiest man in the world. This only speaks of the wealth that there was in this region.

Once Andhra and Rayalseema came out of the Madras presidency, the people of those regions thought that it would be best to merge Telangana with their regions. Our assembly building, the high court building were all from the Nizam's period. In 1909, M Visveswaraya, the father of engineering, constructed an underground drainage system in Hyderabad, which is being used even today. 69 per cent of the Krishna rivers's catchment area is in Telangana. The revenue that was being generated in the Telangana region was much more when compared to Andhra and Rayalseema.

The fact that Dr B R Ambedkar had said that Hyderabad should be made the second capital of India speaks volumes about the region. Moreover Hyderabad is a connecting point between north and south India. They wanted ready-made infrastructure which was in abundance in Telangana and hence they managed to pressurise the government of India to consider their decision.

Which promises were broken when the Union government merged Telangana with Andhra?

The very first promise that was broken was regarding the name of the state. The Union government had promised us that the state would be known as the Andhra Telangana state. However overnight, the leaders from the Andhra and Rayalseema regions managed to convince the government to change the name to Andhra Pradesh. After that the leaders of the two other regions worked consistently to make Telangana a backward region. Another instance of a broken promise is the fact that the Shriram Sagar water project in Nizamabad has been in cold storage for the past 40 years.

What is the main justification for seeking a separate state? Do you really think that things would improve?

It is absolutely important that we be given a separate state. Our accent and our culture is different. Our style is very Deccan and we use a lot of Urdu when we speak. We have a mixture of northern and southern style. We even celebrate Holi. We have every reason to demand for a state. To be honest, if Telangana is carved out it would be bigger than 100 countries in the world and larger than 18 states in the country. Once Telangana is carved out it will be 1,14,800 square kilometers.

What we fail to understand is that how did the government manage to bypass all of you and merge Telangana?

We concentrated more on development and not politics. The simple fact is that we did not have access to the central leadership in the same way as the leaders of Andhra and Rayalseema had.

The question should be the other way around. Since day one, we have been treated like second-rate citizens. Depriving us of development is one issue, but the fact that everyone makes fun of us is also an important point in Telangana. Take the film industry for instance. There are no cinema heroes from our region. Moreover what hurts the most is that the language spoken by the people of Telangana is always attributed to a joker or a villain in the movies.

There has been terrible violence due to this issue. Would you want to justify that?

The violence is not half of what the media has been projecting it to be. In the Telangana region, the Andhra Pradesh Road Transport Corporation faced a loss of Rs 7 crore due to the protests. This was mainly because the bus services were shut down and also due to incidents of stone pelting. Whereas in Andhra and Rayalseema the losses were to the tune of Rs 70 crore and this was largely because buses were being burnt.

The Bharat Sanchar Nigam Limited too had said that at the Shrikrishna Devaraya University at Rayalseema, students had burnt its optic fibres which resulted in a loss of Rs 2 crore.

There was also an incident in which supporters of J C Divakar Reddy in Rayalseema had bombed a railway station, causing a loss of Rs 10 crore. Now it is clear that the people of Telangana have not been protesting in these regions. We have only protested in a democratic manner. All these statistics have never been reported by the media since 95 per cent of the media is being controlled by barons from the Andhra and Rayalseema regions. The media too has been asked to project only incidents taking place in the Rayalseema region. Please understand this is our demand for the past 50 years, it is not something that has happened overnight.

What is your view on the flip flop by political parties in Andhra Pradesh?

Both the Telegu Desam Party and the Praja Rajyam Party had said that they would support the bill if it is introduced. Till the 2009 elections, the TDP was against Telangana, but at the time of the polls they joined hands with the Telangana Rashtra Samiti since it felt that the demand was very strong. Today due to pressure from the other regions, they are backtracking.

Many legislators raised a point saying that the Union government had acted in haste by announcing the formation of a separate state at midnight. I would like to ask them whether they had a problem when India got independence at midnight. This issue has scared off investors. Aren't you worried that the economy of the region will suffer?

The people of Andhra and Rayalseema have purchased land from the poor people of Telangana at throw away prices. Over the years they have inflated the prices. These persons are worried. There is also the middle class which has invested in land in the Telangana region. I would say for a fact that the prices would drop by half once Telangana is formed. However this is temporary. Once the state is formed and the Telangana government invites investors, the real estate would be back to normal.

Finally, there is a murmur that Y S Jaganmohan Reddy (son of late chief minister Y S Rajeshakara Reddy) could be behind all this in a bid to overthrow K Rosaiah. What is your take on this?

(Laughs), He is very much behind the scenes or at least was behind it. He did try and overthrow Rosaiah by escalating the tension. However things went out of control when the movement went into the hands of the Telangana people. He is now in soup since there is pressure from the people of his belt. He is now trying to paint a different picture to come out of the soup.

'Infections are going to skyrocket'

My face is everywhere: Priyanka on Cong CM face in UP

Netaji's statue to be installed at India Gate: PM

'The ground is shifting in UP'

Haircuts With A Symphony

An avoidable mess over Telangana