Nitin Gadkari: From a humble student leader to BJP chief 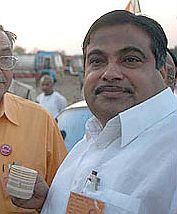 It has been a long journey for 52-year-old Nitin Gadkari from a Sangh swayamsevak, to a student leader and to be the youngest-ever president of the Bharatiya Janata Party.

Gadkari, who was appointed by the party's parliamentary board to the top post on Saturday, is a disciplined soldier of the Rashtriya Swayamsevak Sangha and will have the distinction of becoming the first BJP chief from Maharashtra.

It is a coincidence that he hails from Nagpur, the headquarters of the RSS -- which has always been the guiding force for the main opposition party.

Gadkari, who has replaced Rajnath Singh, has been entrusted with the responsibility at a time when the Congress is playing the Rahul Gandhi card, projecting the young leader as the future Prime Minister; and BJP is facing serious challenges on the leadership front.

The BJP leader, who was till now the chief of Maharashtra BJP, proved his mettle as an effective minister in the Shiv Sena-BJP government in the state ten years back.

Though an 'outsider' in Delhi circles, he is no babe in the woods and is known in the BJP as a clear thinker having a forward-looking vision and an organiser who knows how to take the party along.

Gadkari has maintained his close proximity with the RSS leadership right from the days of the then RSS chief Balasaheb Deoras and later with Rajju Bhaiyya, K C Sudarshan and the current head of the organisation Mohan Bhagwat.

In fact, the talk in BJP circles is that Gadkari became the hot favourite for the top job following Bhagwat's search for a new leader to turn the party around.

The RSS chief was on the mission in the wake of the BJP asking for its help to get its house in order following the second successive defeat in the Lok Sabha elections earlier this year.

Gadkari has been brought in the wake of failure of the second-rung leaders to put up a united show and indulging in one-upmanship for succeeding Rajnath Singh, who quit as party chief on Saturday.

During the Sena-BJP regime in Maharashtra, Gadkari got the first big break when he was inducted in the Manohar Joshi cabinet and was entrusted with the public works department portfolio.

A visionary leader, Gadkari changed the work culture of his department, made bureaucrats accountable and encouraged build, operate and transfer policy in projects. His greatest achievement as the PWD minister was to build the Mumbai-Pune Expressway, which has drastically cut the distance and the time of travel.

The names of Gadkari and former Goa chief minister Manohar Parrikar were zeroed in on by the RSS leadership as also L K Advani, but Parrikar's 'rancid pickle' remark about Advani appeared to have become his nemesis.

At the age of 24, he was elected as city president of Bhartiya Janata Yuva Morcha. He then became secretary of Nagpur BJP unit and has since never looked back, achieving the ultimate milestone in party organisation in his nearly three decades of political career.

He made debut in the electoral politics of Maharashtra when at the age of 32 became a member of Maharashtra Legislative Council from the graduates' constituency in 1990.

Later he became the general secretary of Maharashtra BJP unit and served as Opposition Leader in the state Legislative Council.

In 2004, he was appointed state unit president. Born on May 27, 1957, Gadkari is a post-graduate in commerce and has a law degree and diploma in business management.