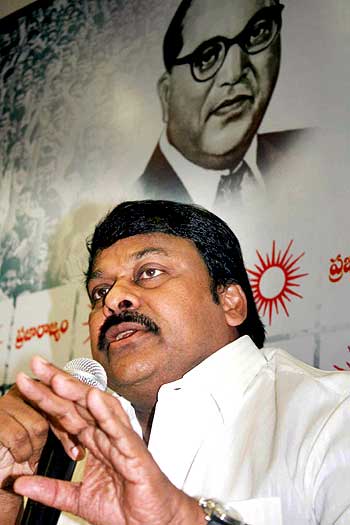 Film star-turned-politician and Praja Rajyam Party chief Chiranjeevi on Thursday announced his resignation from the state assembly in protest against the decision of the Central government to start the process for the formation of Telangana state by bifurcating Andhra Pradesh.

Making the announcement at a crowded press conference in Hyderabad on Thursday morning, Chiranjeevi said that his party changed the policy from pro-Telangana state to pro-United Andhra Pradesh, as the majority of the people of the state want to live together.

"I have sent my resignation accepting the moral responsibility for this change of policy," he said.

With this, 16 of the 17 PRP MLAs have resigned from assembly -- 15 in support of united Andhra Pradesh and one for Telangana. Another legislator from Telangana, Maheshwara Reddy, said that he would also resign and fight for Telangana.

"For the first time in the history of the country, people of a state have come out with such intensity in favour of unity," he said, adding, that it is a must for all the political parties to work in accordance with the wishes and aspirations of the people.

He held the Congress party responsible for the present 'alarming situation and deep crisis' in the state and alleged that it took a unilateral and hasty decision in favour of Telangana, without allowing any discussion in the assembly or the Parliament or consulting anybody.

"The decision (on Telangana) was not correct. Everybody is feeling that and most of the public representatives, including PRP MLAs, have resigned," he said.

Expressing his gratefulness to the people of Telangana for the love and adoration they gave him, Chiranjeevi hoped that they would understand his latest decision, as it was taken in the best and the long-term interests of the Telangana region and its people.

Chiranjeevi's decision to change the PRP policy and quit the assembly to join the ongoing agitation in support of integrated Andhra Pradesh came in the backdrop of incidents in which the theatres screening the films of his son and nephew were targeted by irate mobs in both the regions of the state.

The people, both in coastal Andhra and Telangana regions, were demanding Chiranjeevi to come out openly in their favour and had stopped the screening of the films of Atmacharan Teja and Allu Arjun, his son and nephew.

Chiranjeevi described these protest as spontaneous and not very serious. Stressing that artists belong to every region and every people, he said it would be better if they were not dragged into this controversy.

He appealed to the people to maintain peace and calm and regretted that the Congress was reduced to a silent spectator, when the normal life was paralysed, and there was a feeling of insecurity among the people of the state.

With this, the number of MLAs who have resigned over Telangana imbroglio has risen to 141, but the assembly speaker N Kiran Kumar Reddy has not taken any decision on them yet.

Chiranjeevi, who had announced the formation of PRP on August 25 last year, was elected to the state legislative assembly in May this year from Tirupati constituency in Rayalaseema, and his party could win only 17 of the 294 assembly constituencies. The film star was defeated in Palakole constituency, in his home district of West Godavari.

With Chiranjeevi's decision, PRP is left vertically divided along regional lines as most of the party leaders and workers from Telangana region have revolted and many district unit presidents have quit the party.

Chiranjeevi resigns from assembly for a united AP