'Money has become everything in BSP' 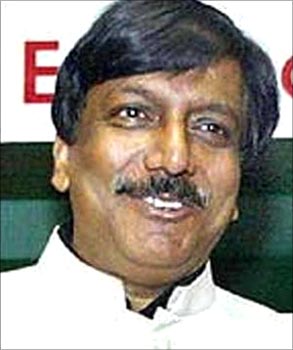 July 22, 2008, was a crucial day in Indian politics. The United Progressive Alliance was facing a trust vote in Parliament. The buzz was that the Samajwadi Party, which was against the nuclear deal since then and whose leaders were opposed to the first family of the Congress, would step in to save the government.

But on the eve of the trust vote, the SP's veteran leader Shahid Siddiqui switched to the Bahujan Samaj Party, sparking fears in the ruling combine that he might take a chunk of votes with him. But things did not go the way Siddiqui planned, and the UPA survived the crucial vote.

The BSP did not fare well in the Lok Sabha polls either and he, too, lost the Bijnore seat, considered a BSP stronghold.

On December 13, the Indian Express carried a report where he criticized Mayawati of being autocratic. "Mayawatiji comes, speaks and goes, there is no discussion," he was quoted as saying.

Within hours, the BSP announced through a senior leader that Siddiqui has been expelled from the party.

In an interview with Krishnakumar P hours after the news broke out, the journalist-turned-politician speaks out yet again against Mayawati.

How and when did you get to know of the expulsion?

From people like you. I received it from the media. I was not served a show-cause notice. Nobody from the party spoke to me.

Did you expect such a reaction after the newspaper report.

The party didn't even ask me about what I said in the interview. I was at a seminar about anti-defection laws at a hotel in Delhi. After the seminar, a reporter asked some questions. To one of those, I said there is no democracy in parties these days. He asked whether it included the BSP too. I said yes. Then regarding the quote about Mayawati treating people, I said she used to sit on the floor those days. But these days she invites visitors and unko kursi mein bhitathi hain'. I did not say anything wrong about her.

If that is the case, will you take up the issue with the party leaders?

The party release, regarding your expulsion, says you were angling for a Rajya Sabha seat after failing to win the Bijnore Lok Sabha seat.

They will always say that. But the truth is when I joined the BSP, Mayawati offered me a Rajya Sabha seat. I declined it, saying I prefer to contest elections. I prefer to be elected, not nominated. But when I contested, the party workers -- at the middle-lower level -- worked against me. I was not ready to spend money and they demanded money. I don't want to use money in politics. Unfortunately in the BSP, money has become everything. There is a mafia working in the party that controls everything.

Whom are you referring to?

I will not pick names.

When you joined the BSP, you said the SP was not doing anything for Muslims. You said in the BSP, you will work for the community. What will happen to that agenda now?

That agenda didn't work. At the time of the Lok Sabha elections, Mayawati said many things about bringing about development for Muslims. When they did not vote for her, she started blaming Muslims. She is not interested in Muslims at all. She has no plans for them, which became obvious the way she speaks about the community. She speaks in derogatory terms when she speaks about Muslims.

When I joined the party, I thought she would work for the betterment of Muslims and Dalits. But then, she was only interested in their votes. She has done nothing for Muslims in the two-and-a-half years she has been in power.

The reasons you have given now - that Mayawati has changed -- that has not happened overnight. She has been like that for a long time. Definitely she is very much the same person that she was before you joined the party. So, isn't your logic flawed?

I have known Kanshi Ram for over two decades and I have seen Mayawati from the 80s. She has changed a lot.

That could be true. But she hasn't changed in the last few years, when you joined her...

True. When there were reports about her style of functioning, I thought it was a media propaganda. When I left the SP, she said you will have all the freedom. She made me the general secretary. I expected a lot from her. I never expected this kind of autocratic functioning. I thought it was all propaganda. It was a mistake on my part. I believe that Dalits and Muslims are equally backward and that something needs to be done for these two communities. She doesn't think so.

Will you go back to the Congress (With whom he was till he joined the SP) or the SP (from where he came to the BSP 15 months ago)?

I will not join any party. I told you. I will work for democratisation of our political parties.

In the city of statues, Mayawati's word is law

Mayawati wants Harid Pradesh out of UP