News
Business
Movies
Sports
Cricket
Get Ahead
Money Tips
Shopping
Sign in  |  Create a Rediffmail account
Rediff.com  » News » Anti-Muslim violence on the rise in US: Report

Anti-Muslim violence on the rise in US: Report 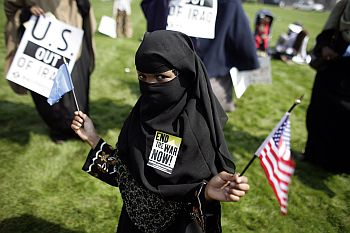 The number of bias-related incidents against Muslims in the United States of America increased in 2008, although hate crimes against the community recorded a fall, the Council on American-Islamic Relations said on Thursday in a report.

The report, titled 'Seeking Full Inclusion,' by the Washington-based Council on American-Islamic Relations gave a summary of the incidents and experiences of anti-Muslim violence, discrimination and harassment reported to the group during the 2008 calendar year.

It also examined the use of 'Islamophobic rhetoric' in the 2008 US presidential election and highlighted a number of issues of concern to the American Muslim community, including watch lists, surveillance of mosques and the new Federal Bureau of Investigation guidelines that allow religious and ethnic profiling.

"In 2008, Muslims continued to face barriers to their full and equal participation in the American society. Certain individuals and institutions persisted in profiting by smearing Islam. American Muslims continued to fear profiling, surveillance and undue scrutiny by law enforcement and other authorities," the report stated.

CAIR and its affiliate chapters nationwide processed a total of 2,728 incidents in 2008. That figure represents a three percent increase in reported cases from 2007 (2,652 reports) and an 11 percent increase over cases reported in 2006 (2,467 reports).

It is the highest number of civil rights cases ever recorded in CAIR's annual report. CAIR, however, clarified that the higher number of cases is due in part to inclusion of a new category of cases related to e-mailed, faxed and e-mailed threats and hate messages.

According to CAIR's study, the occurrence of reported civil rights complaints increased at mosques and Muslim organisations, rising from 564 cases in 2007 to 721 cases in 2008, representing a 28 percent increase from the previous year.

The report said that the government's ability to conduct surveillance without adequate oversight or control has expanded and shows no immediate sign of contracting. Near unchecked expansion of watch lists strongly contributes to the 'flying while Muslim' phenomenon.

"Last minute alterations to the attorney general's guidelines allow for investigative 'assessments' of individuals or groups without any accompanying factual predicate, which along with less oversight and profiling factors having a role in investigations, sounds a warning bell for those concerned about civil liberties," the report noted.

"The decline in reported hate crimes leads to cautious optimism, while the reported increase in incidents at Muslim institutions and at schools reminds us that continued vigilance and stepped-up community outreach efforts are necessary," CAIR Legislative Director Corey Saylor, one of the report's authors, said.

The report also offered recommendations for action by the Obama administration, Congress and American Muslim institutions, including reviewing and reversing guidelines issued in late 2008 that allow racial and religious profiling, reducing the size of the watch lists, and implementing effective means by which travelers who believe they have been profiled may seek redress. US President Obama is also asked to visit an American mosque.

CAIR also recommended that the Congress should pass the End Racial Profiling Act and the Fair, Accurate, Secure, and Timely Redress Act of 2009 and not offer a 'legitimising platform.'

CAIR began documenting anti-Muslim incidents following the 1995 attack on the Murrah Federal Building in Oklahoma City, when some commentators initially blamed Muslims for the bombing. Before the real perpetrators were identified, Muslims nationwide were targeted in bias incidents.

Image: A Muslim girl joins other anti-war protesters in front of the State capitol before marching toward the Republican National Convention in St Paul, USA, during the 2008 presidential campaign