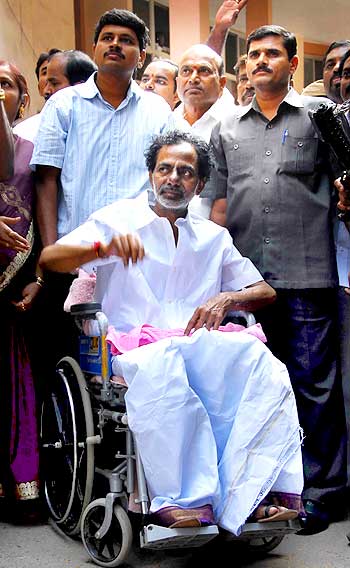 There was more political drama in Andhra Pradesh over the Telangana issue with 11 members of the Praja Rajyam Party tendering their resignation.

On the resignation of the MLAs, he said that it was an individual decision and at no point of time has the party urged them to take such a decision.

Moreover, the resignations have not been tendered to the speaker of Andhra Pradesh as yet.

Meanwhile, the chief of the Telegu Desam Party Chandrababu Naidu also did an about turn on the same issue. Naidu, who had fought the elections alongside the Telangana Rashtra Samithi, said on Thursday that the decision of the Congress to split the state was shocking and he was heart broken after hearing the news. He too is meeting with his party workers to decide on the next course of action.

The speaker of Andhra Pradesh Kiran Kumar Reddy said that none of the MLA's resignation has been accepted as yet. The MLAs have met with Congress chief, Sonia Gandhi, who has asked them to stay calm and not worsen matters. He also said that a Cabinet meeting is scheduled to be held later in the evening over the same issue.

Meanwhile, the Bharatiya Janata Party lashed out at all the political parties in Andhra Pradesh for their 'U-turn' on the Telangana issue. Andhra BJP president Dattatreya said at a press conference in Hyderabad on Thursday that the true colours of all political parties have started to emerge.

He was referring to the mass resignation by MLAs from all parties in the state over the Centre's decision to start the process for the formation of Telangana.

"The BJP is pro-Telangana and our national policy is the formation of smaller states. The BJP welcomes the announcement by the government. However, we feel that had this announcement been made earlier, the lives of 25 students who committed suicide could have been saved," Dattatreya said.

"Although the party is happy over the decision, we still have our own doubts about the time that the Central government could take to initiate the process and also complete it. We seek to know the time frame for the process to be initiated and completed," he added.

Dattatreya said that he was shocked to see both the Congress and the TDP doing a 'U-turn' on this issue.

"It is shocking to see Chandrababu Naidu in particular doing a U-turn. 29 MLAs out of the 91 MLAs from his party have resigned, and interestingly,  all these 29 MLAs are from the Rayalseema and Andhra region. We don't understand what Naidu's game plan is. He should have stuck to his pre-election stand and coaxed his MLAs not to resign," he added.

What was on the menu for Trumps at Raisina Hill