Madam, the Indo-US nuclear deal is about nuclear energy and the uranium that we don't have. It's not about technology." said Dr Anil Kakodkar, while replying to rediff.com's  question on America's resistance in giving India access to enrichment and reprocessing technology under the deal.

Dr Kakodkar is chairman of India's Atomic Energy Commission and secretary to the Department of Atomic Energy since 2000 and that gives him total control to navigate the direction of India's nuclear capabilities, civil and military. He was talking to journalists in Mumbai after delivering the Lalit Doshi lecture. Doshi was a Kutchi Gujarati IAS officer who radically changed Maharashtra's industrial development in the 1970s. He died of heart attack at a young age while attending the World Economic Forum meeting at Davos.

Dr Kakodkar spoke at length on 'Nuclear energy in India: The way ahead'.

The difference between nuclear scientists and normal humans is that they can't be 99.99 percent correct. They have to be 100 percent in whatever they do and Dr Kakodkar's lecture in Mumbai was just that. He presented his lecture through a power-point presentation before the audience that included businessmen Adi Godrej, Anand Mahindra and Uday Kotak. Dr Kakodkar will be overlooking some $100 billion in investment in nuclear energy in the coming decade.

He was born in Madhya Pradesh in Barawani village. His mother Kamla and father Purshottam inculcated in him a love for music, Marathi plays and mathematics. Dr Kakodkar was the part of the team that helped India ushered into nuclear age on May 18, 1974 when India tested a nuclear device at Pokhran. Dr Kakodkar has been part of the team building the Dhruva reactor and the latest nuclear submarine Arihant as well.

The 'mild-mannered gentleman' once said that quick bucks don't attract him but today, under his direction the Nuclear Power Corporation of India will be investing hundreds of crores of rupees to generate 10,000 megawatts of power.

In his long lecture, a few things came out quite clearly.

The most important message of his lecture was that India is in a major transition. "We have to work for technology that would work day after tomorrow not just tomorrow."

He said, "The energy situation is precarious and in some time it would become so for the world. We have to cover a lot of ground."

The country is getting ready for joint venture in nuclear energy sector where private companies, Indian or foreign, will have to join hands with NPCIL. The US, France and Russia have shown interest and talks are going on. The profit ratio is around 10 to 15 percent in the nuclear energy business. The liability factor is being determined for the suppliers of reactors and it is becoming clear that operators of the imported power plant will have to bear more risk than the suppliers. Dr Kakodkar said, "In the nuclear energy sector, like Enron power supply plant, one can't close the plant and go home. So, one has to be very careful while selecting partners for joint ventures."

India will be importing some 40 light water reactors which will help India stabilise its demand for power by 2020. And after that thorium based reactors would fill the gap.

Dr Kakodkar dismissed the allegation that India is ignoring thorium research. Rather, he shared a small little lesser known activity. He said that, "In technology terms, we have mastered thorium technology to get energy from it. We have small unit where we use U233 fuel extracted from thorium. We have mastered all aspects of thorium-based energy. It is on a small scale, we have to expand it." He said that deployment of thorium technology has to be in sequence. Dr Kakodkar refused to give any time frame by which plants will be built to use the huge deposits of thorium in India.

He showed a slide that portrayed the night picture of the earth. The US, Europe, India and the eastern part of China were lit up, indicating that these countries use more electricity and large parts of Africa and many other underdeveloped nations are in the dark. Dr Kakodkar's contention is that globe's major challenge is how to reconcile this. Some countries have a per capita consumption of energy at around 18,000 kwh per person while in India it is 700 kwh. Dr Kakodkar said the quality of life greatly depends on amount of energy spent. But, in his view, "quality of life would be improved if we bring it down the energy consumption". He explained that the total energy that a growing India would need in the coming years is mind-boggling.

Fossil fuels (coal, gas, oil) are the main energy source in India but it will become insignificant.

Dr Kakodkar's main contention is that if coal, gas, oil, hydrocarbon, solar and other alternative energy sources are exploited together India will still be short of energy.

It is the challe 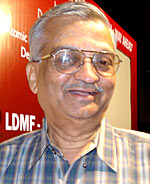 nge for Indian planners to manage the gap. The gap could be up to extent of 400 gigawatts by 2050. He said nuclear energy will contribute more to the grand total once investments are made. Since nuclear energy is free of green house gas emissions it is preferred and America, Sweden and many other countries are reviewing their policy regarding nuclear energy.

He said the world would need some 3,000 nuclear reactors if this policy shift comes. He said that gas and oil would run out faster than other fossil fuels. He said ten years back we thought that India has coal that would last decades but now, the consumption of energy is so much that it is believed that it will run out much before 2050. He said even the uranium is unlikely to last beyond 2020. So, recycling fuel is important.

Dr Kakodkar explained that India's solution lies in a combination of energy and of course, nuclear energy is one important part of it. He says enough studies have been done to plan energy up to 2050.

Dr Kakodkar reiterated that India is sticking to the vision of Dr Homi Bhabha's three pronged strategy. India is in second stage of Pressurised Heavy Water Reactors. He said whatever is envisaged, India has the technology to do it.

In his reply to rediff.com, he said Indo-US nuclear deal was mainly to open the way for getting uranium and it's not about getting technologies. He also proved with charts that India produces nuclear energy economically.

India is ensuring the security robustness of the nuclear plant not just by physical verification but by design also. India has signed the International Convention for Physical Security to ensure security of nuclear materials. He said India has also joined World Association of Nuclear Energy Plants Operators. The members make peer reviews of each other's security measures. He said that mutual learning of security measures has taken security to a much higher level.

While talking about non-conventional energy he said, "let us not be emotional about it." He said even if country exploits it fully it will not cover the total demand.

He told some agitated members of audience that, "let us take actual numbers of demand and then calculate it. Renewable energy will not be able to fulfil the demand."

He coolly dismissed the allegation that India is following America in the nuclear sector. He said, "If we would have been copying America then we would have given up the three stage nuclear programme long back."

He asked agitated people to visit the DAE website. He said, "India doesn't develop technology to become world leader but India does it to meet the aspirations of its people."