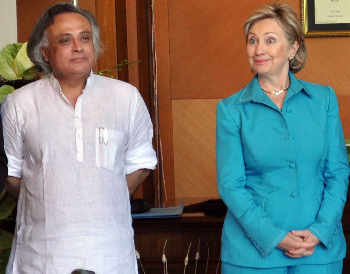 Image: US Secretary of State Hillary Clinton with Minister for Forest and Environment Jairam Ramesh during a conference on climate change in Gurgaon on Sunday

Now, you don't get this often. An Indian minister talking straight and sharp. Less diplomatic, but quite political on an important global issue.

In the presence of the United States Secretary of State Hillary Clinton and Todd Stern, US president Barack Obama's special envoy for climate change, Indian minister for environment and forests Jairam Ramesh spoke in no non-sense term on India's actual position on climate change and, in process, gave a response in the same coin to none-other-than New York Times's strong editorial which gave advise and comments on the Indo-US bilateral issues, including climate change and Pakistan.

'Not in a position to take on legally binding emission reductions' 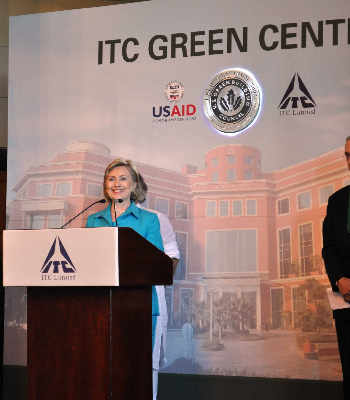 Image: Clinton speaking at the conference

On Sunday afternoon, during Clinton's visit to ITC green centre in Gurgaon, few questions were invited from media.

In response to a question Ramesh said, "Let me tell you clearly and categorically that we are simply not in a position to take on legally binding emission reductions."

By saying this India has told Todd what is the bottom-line of the talks on climate change, which he is going to have with Ramesh on Tuesday.

The editorial says that it is time for India to take more responsibility internationally.  "It needs to do more to revive the world trade talks it helped torpedo last year and -- as a major contributor to global warming -- to join the developed countries in cutting greenhouse gas emissions."

Ramesh told the gathering in Gurgaon that India is not running away from mitigation of carbon emission. India already has the National Action plan on Climate change in place. It will enable India to adapt to effects of climate change.

He said that the plan is very specific and pointed policies for mitigation of carbon emission.

'India not oblivious to the issue of carbon emission' 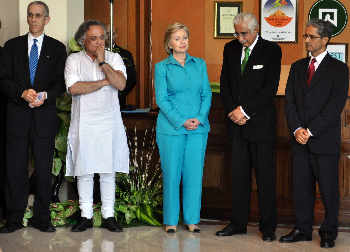 He said with emphasis that India is not oblivious to the issue of carbon emission. He said, "Energy efficiency is fundamental driver of our economic strategy."

Ramesh also said there should be joint research programmes between India and US on climate change, joint efforts in institution building as well.

Many experts believe that in view of the Western countries' pressure, ultimately India and China will have to accept some quantifiable cap on it's carbon emission at the Copenhagen conference on climate change; but Ramesh's unambiguous language on India's "bottom-line" on the issue, that too in presence of Clinton and Stern, makes it clear that India will play a hard bargain contrary to media reports that suggests that in Italy, in Major Economies Forum India has changed its position on climate change.