'I don't think Obama's visit will be a success' 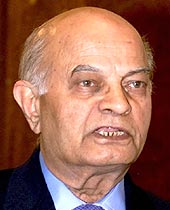 Read on to find out why he thinks that the much-awaited visit may not succeed in spite of the need for India and the US to engage more than ever.

What was your initial impression of President Barack Obama?

I was following his statements during his campaign and after he came to power. As far as India is concerned, to begin with, Obama was not favourable.

During the first few months of his administration, people were trying to persuade India to talk on Kashmir. They were more or less suggesting that you settle the problem immediately.

That created a sense of unease in my mind.

Before that he had introduced killer amendments in the India-US nuclear deal.

So, for the first few months, I was not sure about Indo-US relations taking off from where his predecessor George W Bush had left it.

It seemed to me that Obama is not very concerned about India-US relations.

He had announced plans to withdraw from Afghanistan and that gave Pakistan a chance to help the Afghan Taliban, so that they have negotiating power.

Today, you will see that negotiations are going on between the Afghan Taliban and the Hamid Karzai-led Afghan government.

It seems that the campaign against the Taliban in Kandahar is being conducted to persuade them to give up their conservative agenda and to have a peaceful agreement with the government of Afghanistan.

The US will continue to operate in Afghanistan until such an agreement takes place.

Today it seems that the Taliban has realised that negotiations have to take place. But the Taliban is also divided, so we don't know if they can deliver or not.

If the US leaves Afghanistan and the Taliban recovers its position, then that is a danger for India.

We should be very concerned if the Taliban regains its position. That is the biggest aspect and I am sure, Prime Minister Manmohan Singh will discuss this issue with President Obama.

Second, what does Obama think of India's role in Asia and the world?

That inevitably brings in the China factor.

Does Obama think that India has an important and credible role in global and Asian affairs?

Does he think the way Bush thought that India should be supported in such way that it can balance China in Asia?

In my view, that is the central question.

I am not quite sure that Obama has the same kind of thinking as the previous US government.

What made you think that?

His policy towards China and his acceptance of China's role in Pakistan tells me that his views are different from Bush.

I mean, he accepts an alliance between China and Pakistan. So in that case India's position is weakened. What does Obama want?

Does he want India to play a role in Asia?

If he wants that, then obviously, there would be some rivalry with China, some confrontational position would come up. What are Obama's views?

Let me put it frankly, the 'all-weather' friendship between China and Pakistan has now become an alliance.

China has started helping Pakistan in a much bigger way than before.

China is also pushing India at the Line of Actual Control.

What the government has called 'assertiveness', I call an aggressive posture by China. Pakistan is being helped by China and by the US.

China is acting against India not only on the Line of Actual Control, but also on the issue of Kashmir.

Sometime, it threatens India, reminding it of (the war of) 1962 and claim they want to reoccupy what they call Southern Tibet (Arunachal Pradesh).

All these issues have created an adverse security situation for India.

It weakens India's interest in Asia and in global affairs. India's role would be minimised if the challenge is not faced.

If India can't manage relations with Pakistan and China, it gets engaged in a situation where it can't play any role.

There is also the question of expansion of the United Nations Security Council and India's role in it.

More important than entering the UNSC is the support that India should get while confronting the new alliance between China and Pakistan.

What would the US led by Obama do?

On one side we should ask Obama such questions, but at the same time we should speedily arm our defence forces to defend ourselves on both fronts.

We are not in a position to look after both fronts at the same time speedily, today. But we should gear up fast with modern equipment.

Do you think Obama is well inclined now towards India's sensitivity?

I can't say that. I have a question mark. Let us see what he does when he comes here.

So far, reports indicate that he will talk about long-term relations and economic relations etc, etc. It is not at all clear what he thinks about the strategic partnership.

What I am looking at is what he has to say on China and Pakistan ganging up against India's interests.

I also say at the same time that if Obama has no answer than we must do it ourselves. We must face the challenge. We must modernise the equipment needed by our defence forces. We should move very fast.

I am not sure the US will be on India's side, so it is better we get things going.

In fact, India doesn't know what Obama thinks of this partnership. We just don't know. Hopefully, we will know on this visit.

How do you see bilateral relations going otherwise?

The civil nuclear deal is finalised. The problem of nuclear liability will be settled, I think.

What India needs is removal of sanctions on dual use technology. There are too many restrictions.

If they don't remove the sanctions then the India-US military relationship cannot be a big thing.

The US wants us to buy from them and then they want to know the end use of it. They say don't use it against so and so.

What's the point of the deal then?

It is very important that the US removes the sanctions. I don't see any signal so far that the US is going to remove it, substantially.

What would be the focus of his visit?

I believe it has to be India's safety and security.

Even on Kashmir, India has to be alert in view of China and Pakistan's changed strategy.

If we don't get some support from Obama then I would say that his visit is not a success.

If Obama has the same understanding as Bush had of the strategic partnership then he would say something about it in his address to Parliament.

That would be the most important address he would be making in India.

My contention is that the safety and security is important and India's concerns should be supported so that India can play a global role.

There is a scope for criticism of your comments. Many believe that India should chart an independent course with China and should not expect America's support in any manner whatsoever.

I have said that at the same time that India should ensure its security. We should expect America's support, but must not lower our guard. Why am I saying all these things?

I am saying it because of China's attitude in the last two years -- their aggressive postures on the LAC, the change in their Kashmir policy. Can anyone dispute it?

The statements from China telling India not to forget 1962.

The statements regarding re-occupying what they call Southern Tibet, the statements about breaking India into many pieces.

But all of these are not China's official view.

I am sorry to say that in China they censor such things. Those negative statements were from a think-tank supported by the Chinese government.

The warning to India was from a general of the People's Liberation Army.

Why should we not take it seriously?

The recent deal between US and Pakistan is equally adverse to India. Right?

Of course. Although the US is not an enemy country, every policy pursued by the US in the region has some adverse implication as the current aid to Pakistan.

Their officers are saying that US weapons won't be used by Pakistan against India. I don't believe their claim.

Patton tanks were used against India in (the war of) 1965. These assurances are meaningless. One fails to understand why the US is giving weapons to Pakistan which are not usable against the Taliban.

That too when Pakistan's army chief General Ashfaq Kayani has said that he is India-centric. The US is not our enemy, so this is exactly why we need to talk to them.

Due to these facts, as of today, I don't think Obama's visit will be successful.

If India does not succeed in making the US recognise the combined threat of the China-Pakistan alliance, there is nothing left in the visit.

The US must support India's position on Kashmir.

We can't be bogged down in South Asia.

National security and economic development are two sides of the same coin.

You must remember that Japan and Germany have a security cover that India doesn't have.

I had told Prime Minister Singh that the understating between China and India (at the climate change convention) in Copenhagen is not going to last.

ALSO READ: Why sparks are flying ahead of Obama's India trip
Why India is the first stop for Obama
Revealed: What Obama will do in India
Obamania hits Delhi, but all's quiet at Rajghat
Cost of Obama's Delhi trip: Rs 15 lakh per hour
China wants to be part of the Kashmir dispute

China a tech powerhouse; why India must catch up

Obama to visit Mumbai on November 6