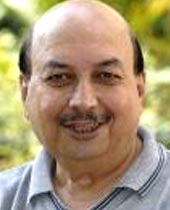 Congress spokesman Satyvrat Chaturvedi has defended former prime minister Rajiv Gandhi whose role in letting the guilty in the Bhopal gas tragedy get off lightly is under the scanner due to the public outcry over the recent judgment in the case -- 26 years after the event. On the night of 2/3 December, 1984, when deadly gas leaked from the Union Carbide plant in Bhopal, Arjun Singh was chief minister of Madhya Pradesh and Gandhi was the prime minister of India.

In the first few years after the tragedy, tremendous pressure was put up by the American corporate lobby and the government on India to save the US-based Union Carbide, the parent company, from civil and criminal liability.

As a result, at every little step, the law could not provide justice to the over 15,000 who died due to the gas leak. More than five lakh victims who suffered chronic diseases are struggling and pleading for help, even now.

The June 7 judgment of a local court in Bhopal, sentencing the convicted officials of the Indian arm of Union Carbide to a mere two-year sentence, has made the entire nation feel small and impotent before the might of the multinational corporations, the sluggish Indian justice system and its spineless political establishment.

The entire Bhopal saga was witnessed from close quarters by Rajkumar Keswani, an outstanding journalist, who had in fact foreseen this catastrophe. His work proves that the tragedy of Bhopal started much before December 3, 1984.

Keswani has witnessed the entire saga of deception of the victims of Bhopal by the Indian and American governments and multinational corporations. He shares his agony in a telephonic interview with rediff.com's Sheela Bhatt.

You have been following the Bhopal gas leak case for 25 years. What was your first reaction on hearing the verdict on June 7?

I had no expectations on that day. The seed of this judgment was sown when a Supreme Court bench headed by then Chief Justice of India, A H Ahmadi, passed a judgment in 1996 that converted section 304 (II) (culpable homicide not amounting to murder) of the Indian penal code to 304-A (causing death by negligence) to try the case. In 1996 we knew the fate of the Bhopal gas case. He diluted the charges filed against Union Carbide. What happened was the culmination of injustice that started with that judgment.

Was there a design behind this?

I can't say how it was done. But surely there was some design. Eventually, after retirement, Justice Ahmadi became the lifetime chairman of the Bhopal Memorial Hospital Trust and Research Centre which has funds worth millions of rupees. Those millions, paid by Union Carbide for the poor victims, are under his control even now.

When we talk about Union Carbide and Anderson, we must remember that they have never ever been subject to Indian laws. They have never appeared before an Indian court, nor have they lost anything due to Bhopal or benefited by the June 7 judgment. Our country's system gave them eternal protection from any legal proceedings. There was no serious attempt at all to bring Anderson to this country in the last 25 years.

Can you tell us what kind of evidence you had against the US-based Union Carbide Corporation, parent company of Union Carbide India?

I started working on this story in 1981. That was the time when my friend Mohammad Asharaf was working in Union Carbide India Limited. He died due to exposure to phosgene gas. I had an idea that some hazardous chemicals are being used in the Bhopal factory. I reported on his death and then worked for nine months on knowing about the factory. I reported my first story in September 1982. In October that year I ran a series and wrote weekly reports against Union Carbide and the possibility of risk to human lives due to the chemicals in the plant. People treated me like a crazy man. They used to tell me, 'Arre aisa kabhi hota hai kya? Aisa kabhi hua hai kya is duniya mein?' (Do things like this happen? Have such things happened anywhere in the world?)

People in government, who were in the know of things, were hand in glove with the management of Union Carbide. They would trust Union Carbide more than anything else. Union Carbide was the only multinational at that time in a small city like Bhopal. Their reputation was such that it was difficult for anyone to believe that they could be negligent. It was very disappointing for me.

But what kind of evidence did you have against UCC of the US?

In 1982, an audit team had visited Union Carbide in Bhopal. They had inspected the plant and said that certain safety measures must be taken, otherwise there could be a gas leak. I printed the report of the visit of the audit team and their observations in Jansatta before the 1984 gas leak.

At 15 places in that report, they had written that safety measures are not proper and it could have a 'runaway' reaction. So the plant had problems before the leak in 1984. There is enough proof. Second, UCC, USA said they were not involved in the day to day running of the plant so they could not be made responsible. There are telex messages as proof which shows that the company in USA was totally involved in all the decisions of the company in Bhopal. They were sending instructions to Bhopal.

UCC India had a works manager named J Mukund (one of the accused who was convicted on June 7). He had sent a message asking for advice about coating the pipes. The US-based parent company sent him a message saying that the best material for piping would be too expensive and too difficult to acquire. How can UCC, USA escape their responsibility when they were advising Bhopal to economise on safety measures? They were telling Bhopal to use cheaper material. They were advising it to compromise on safety. Mukund's message was sent on August 27, 1984. Just a few weeks before the fateful leak.

Do you have the copies of those telex exchanges?

Justice Ahmadi, when he diluted the charges against the company, didn't see these telex messages?

He saw what he wanted to see. Actually, there was a review petition of his order but he rejected it. We had sent messages to all the members of Parliament at that time to press for a review of the dilution of charges against the company. There are hundreds of documents that suggest that the parent company was involved in the running of the Bhopal company and they were aware of the problems in the plant. I submitted all of it in a US court too.

Who played the bigger game in the Bhopal 'cover-up'?

I challenged it in the court with the help of Indira Jaising, my lawyer. Only after that petition was the criminal case revived in June 1989. Anyone can understand what the role of the Government of India has been in helping victims.

It's very intriguing to see that after the Bhopal tragedy innumerable NGOs, from stalwarts like Indira Jaising to hundreds of local community leaders, fought for the victims but nothing came out of it. Why such a total failure?

This is a very serious question. I am also worried about it. I don't know if I should say anything on it.

But so much has been done by the foot soldiers of civil society. All over the world the victims have sympathisers. Still justice was not done. Why?

These are voices only. In society today only a loud bang is heard. That can be done by the television media. If the people would have reacted in a similar manner in 1996 to Justice Ahmadi's decision, the Bhopal verdict would have been different.

How do you look at the Bhopal judgment?

I think the judge in his wisdom has not spoken much on (UC India chairman) Keshub Mahindra's role. We have a grouse against it. It should be challenged. The Indian managers were equally responsible.

In Bhopal, during these 26 years, has Keshub Mahindra ever said sorry?

No. Rather, they have been manipulating the case. I have evidence to say so.

Who are the guilty men of Bhopal?

There is Union Carbide Company who compromised safety for profit. There was the Indian government who could not withstand the might of the multinationals. The cause of the tragedy was Union Carbide, but the injustice was due to the slow process of the judiciary and the Central Bureau of Investigation. The investigating agency became a partner in crime.

Who helped Anderson? Who executed the operation to get him out of India on December 7, 1984?

We reported these things then. We have no recordings of it now but we reported though our sources.

You are fighting since 26 years but now you see all around that people are reacting sensitively. There is a feeling of anguish and frustration. How do you see the new-found interest in the Bhopal case?

This is due to the new media and the images on television. Yeh TV ka kamal hai. These days, we are dictated by images on TV. They make us cry and they make us laugh. It is good, and even bad sometimes. In the case of Bhopal tragedy it is good that TV is shaking our memories.

'Got a call from CM's office to fly out Anderson'

Bhopal case: Accused get only 2 years in jail