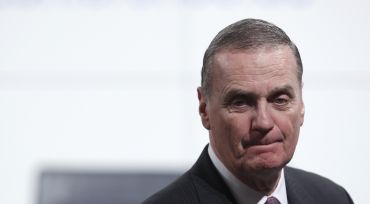 In an interview to CNN-IBN's Editor-in-Chief Rajdeep Sardesai, Jones spoke on Pakistan, the ISI, the Afghanistan war, access to Headley and other burning issues.

Do you believe that the shadow of 26/11 still lurks over the subcontinent, in the sense, the fact that terror remains the biggest concern certainly for New Delhi.

James Jones: The shadow of terrorism lurks not only in this continent but on our continent as well and is in fact one of the omnipresent threats to order, peace and stability in the 21st century. So this is something, that, we are all engaged in, whether in Europe, whether in India, whether in United States. Most governments have to take this very seriously and it is an ongoing problem that we have to deal with.

Following Headley's confession that Pakistani state actors were involved in 26/11, has Washington registered these concerns with Islamabad?

Jones: First of all, the Headley interview for India are a manifestation of the growing good state of relationship between our two countries and we have to have more cooperation on intelligence matters, so that we can be successful in defeating terror wherever it presents itself. But for Pakistan, of course we have in our bilateral relationships with Pakistan, and we have expressed our strong concerns over the existence within the borders of Pakistan of terrorist organisations that have goals to de-stabilize and to attack our way of life, your way of life to prevent our strategically stability in Afghanistan and this is in violent conflict with how we see the world collectively and bilaterally in the 21st century. Pakistan must recognise that it is contrary to their own interest for the future and stability of the region to continue to tolerate the existence of insurgents within their border so it's the first means of correcting that and it's the first means of showing that the Pakistan wants the same things we want and has the values we want. They have to make tough decisions to go after these terrorist organisations and state concretely and publicly that this matter of policy this cannot be tolerated.

Jones: I can assure you and your viewers that philosophically US and India are the locus of terrorism and are exactly on the same page.  We are doing everything bilaterally possible with Pakistan to show them that there is possibly a better way. There is a brighter way for their people, agriculture, economy, education all of those things. But all good things in future will come but not until we stabilise the problem we are concerned about and they are concerned also. If this is a question of capability we should help them to overcome this state and we should encourage them to do the right thing.

India has made Hafeez Saeed, the JuD chief, one of the most wanted as test case for Pakistan to act against terror. Headley specifically mentioned Saeed as one of the 26/11 attack masterminds. Will US also like to see Pakistan is serious about Saeed?

Jones: We want to see a more comprehensive programme that addresses all aspects of terrorism. Because all of these groups we are finding out our link need not necessarily target against any particular nation but they are terrorist organisations with a mind set to disrupt India or to destroy our way of life and are actively planning to do that.

Will US agree if India needed more access to Headley as a part of this joint strategy against terrorism?

Jones: I think the state of our bilateral relation is of such good quality, we would cooperate with anything India needs to better understand the threats of terrorism it faces.

There is some evidence that ISI is backing some Afghan Taliban groups. Pakistan is at one front a partner with US in tackling Al Qaeda in Afghanistan and on another front the ISI is suspected of patronising the Taliban groups. Is that something that you fear that there are groups in Pakistan those help Taliban in Afghan.

Jones: Without going into much details let me say on this issue our engagement with Pakistan government and the Afghan government is such that we consistently tried to make a case that whether it's military government or the civilian government they have to act on a single point objective to get rid of these insurgent activities and these safe havens that have made life on this side of border more complex and on Afghan side where more young men and women are made to pay price. Some times Indians have also been targeted in Afghanistan to which we extend our condolences. In this very moment, within this year, we have to come out together with a comprehensive policy and to execute that policy which addresses holistically the idea that terrorism is acceptable in one form but not in another.

Has Islamabad understood that yet?

Jones: Well, the message has been delivered quite forcefully and convincingly. We are now in the execution phase to see how we can collectively move in right direction to achieve goals we must achieve and to bring peace, prosperity and stability to the people of the region.

General you mentioned briefly about India's role in Afghanistan

Jones: May I say also that this is for US not a short-term project.  I want to raise this issue, as there is a lot of misunderstanding about what July 2011 is and is not. What July 2011 is not is an indication that US is going to disengage from August 2011. We have a long-term commitment to Pakistan, Afghanistan. So we are not using July 2011 a national decision whether troop is going to come out or not.

There is a long-term engagement with Afghanistan, with this region.  There won't be pull out of all US troops come Aug 2011.

Jones: It won't be a massive pull out. What all we have said about July 2011 is that we want to use a way to measure whether the surge of thirty thousand US troops and ten thousand NATO troops and all the other contributions that have gone in to achieve a momentum shift in our strategic engagement which is complex. Its security level, government levels, reconstruction levels, we can achieve that shift so that the Afghan people can see that their government is able to take up some of the responsibilities. It is condition based. So that we can actually begin to shift our commitment as well. It's a momentum that we want to keep going of which the Afghans can become a bigger and bigger part. So it's a larger goal about the strategy.

Jones: India is a dominant country in the region and has a larger role to play obviously in the development of the region. It's absurd to say whether India to play a role or not, we don't believe in that. Where Afghanistan is going? I think we have achieved pretty close to troop's efficiency. By our strategic calculations our combat troops have reached up to level of sufficiency. That is to be advanced in Pakistan. Security leg is adequate. Development, Investment, helping   the institutions which will help the Afghan government to govern well, I think in those areas India can play an important role in giving the Afghanistan a momentum to move on.

Would you mean peace-keeping. Would you like to see India playing that role?

Jones: Contributions I talked about are peacekeeping roles. We think we have efficiency on ground to provide security and reverse the momentum of the Taliban. India and Pakistan wishing to contribute in Afghanistan can do so respecting each other's viewpoint so that not making matters worst but matters better by helping Afghanistan in many other ways. We need that kind of investment, that kind of help.

Are you equally sanguine about Pakistan, a stable Pakistan. Are you worried about Pakistan imploding within and that instability affecting India?

Jones: We are concerned about making Pakistan understand that in the UN they have a partner that is willing to help them to get to a better place in the twenty first century from the standpoint of totality of their society. In order to do that they need to clearly understand that it starts with security. The insurgents living in that country is an anathema to the progress we think most Pakistanis want to make their family and future. So we assume this is the time there are certain origins to correct and they are working as we speak on.

Is Washington committed to a greater role for India in UN including possibly a permanent membership for Security Council?

Jones: Washington is committed to a greater role for India. What we have to understand is that there is a process to reform the organisations like Security Council in UN. We support that process.  India is going to have to put its best ability not only to get our support but other countries to make the case.

But will US support it?

Jones: US supports recognition of India as a global power with permanency in the long run. India has to have its proper case on the table and we will be participating in a helpful way to make that happen.

What is President Obama's big idea for India?

Jones: I think that the US-India relationship since Jan 2009 is one of the fastest growing positive relationships that US have. In a sense the big idea is when you think about the economic cooperation, the trade issues, and the civil nuclear issues we talk about.

The nuclear deal is still at its last leg. Do you believe that by November it will be done?

Jones: We are hopeful. We know Indian legislative process is underway and its one of the internal processes. We hope this is one of the deliverables for the President's visit. Getting back to your question of big idea, the big idea is that here we have two big democracies, pluralistic societies, secular states who led by to people who really like each other. The prime minister and president not only have respectful relationship but we have alignment on big issues that is to be cherished. I think the path we are on is so rapid that when the president comes here will not only highlight that in capital but also travel to other parts of the country to communicate that to young people, the business community that this relationship is not just about defense, about terror but it has all trappings of the long lasting bilateral relationship that we will have global impact not only the regional impact.

You gave us a news point where you said that you hope the nuclear deal will be signed come November.

Jones: We think we are moving in right direction not only to have that but quite a few other important achievements in our bilateral relationships.

Interestingly, President Obama is visiting India in a festive season. It might be just the right time to put the relationship in completely a new direction in a positive manner.

We look forward to that.

Obama visit will demonstrate strong partnership with India: US