'Telangana demand is today not about development but self-respect' 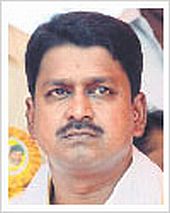 Voices seeking a united Andhra Pradesh are growing stronger by the day; strong enough that it appears they will manage to convince the Centre not to meddle with the geography of the state.

While Telangana Rashtra Samithi chief K Chandrasekhar Rao and his men are not prepared to settle for anything less that a separate Telangana state, the leaders who are fighting for a united Andhra Pradesh are in no mood to let that happen.

Leading the bandwagon of leaders fighting for a united Andhra Pradesh is the controversial Payyavula Keshav, Telugu Desam Party legislator since the past 17 years.

In this interview with rediff.com's Vicky Nanjappa, Keshav says that there is no way in which Telangana will be formed and what is more important is that the tone of the people demanding a separate state has changed.

They no longer speak of development; they now say that the state has to be formed since it is a question of their self-respect, he says.

Why are you vociferously opposing the formation of Telangana?

It is sad to see the state breaking up. The entire issue has been blown out of proportion. It will just not work out if a separate state is formed. The moment this protest started, I decided to lead the movement for a united Andhra Pradesh and a majority of the people feel that the state should remain as it is. If a separate state is carved out, everyone tends to lose and this is not a feasible situation.

Speaking of statistics, the people of Telangana say there is clearly no development in their belt. They also say that people of Andhra and Rayalaseema have grabbed away their rights. What are your thoughts?

They commenced this battle by talking about statistics. They went to everyone showing the statistics until we decided that we too should start talking. We pulled out the statistics regarding development. Statistics clearly show that the people of Telangana have benefited more than the people of Andhra and Rayalaseema.

One thing is clear. The per capita income in Telangana is much more compared to the rest of the regions of Andhra Pradesh. According to the statistics that we have, Rayalseema is most underdeveloped. There are many parts of Rayalseema, which need a lot of attention, and when you compare this, Telangana is in a much better position. Even the leaders from Telangana don't dispute this.

If you claim that your statistics paint a different picture why aren't the people seeking a separate state convinced?

Who said they are not convinced? Once we showed them the statistics, they did come around and were convinced. Do you see them screaming about development today? No. Today, they say it is more about their self-respect and hence they be given a separate state. A demand cannot be made in this manner.

The Telangana movement has had its ups and downs. The Telangana Joint Action Committee is in doldrums with both the Congress and TDP leaders refusing to resign. Where do you think the movement is going now?

We will fight and do whatever it takes to keep Andhra Pradesh united. We are getting all indications that the Congress is moving away from the Telangana Joint Action Committee.

Do you have a joint action committee? How are you going about your movement?

No, we don't have a joint action committee. But yes, we do have a common minimum programme. We have our working groups, which are not political in nature, and we are just going about telling people to keep the state united.

There is a dispute regarding the capital. Some of the leaders opposing the formation of Telangana may come around if Hyderabad is made a common capital.

Since I lead this movement for a united Andhra Pradesh, I think the issue of Hyderabad should not crop up. Why are the people from Telangana even complaining about their capital being taken away from them? The biggest sufferers are the people of Rayalaseema.

Kurnool was the first capital, they gave it up; Guntur had the high court, they gave it up. The capital was moved to Hyderabad so that there was development and everyone took part in it equally. Let us all remember that everyone from Andhra Pradesh has contributed to the growth of Hyderabad.

What do you say about the talk that the real estate big wigs are not prepared to let go of Hyderabad?

I would say that it is rubbish. I don't have a housing plot in Hyderabad, but I don't want to let go of the city since it is dear to us and we treat it as part of a united Andhra Pradesh. There are over 75,00,000 people in Hyderabad. There are a large part of people who are from Rayalseema and Andhra. Do you mean to say all of them have a real estate interest? These people have come here, built houses and it is their homeland. Hyderabad belongs to all of them and they don't want it to go away.

An avoidable mess over Telangana

'Make Hyderabad a UT; not a part of Telangana'