The mess and mayhem of forming Telangana 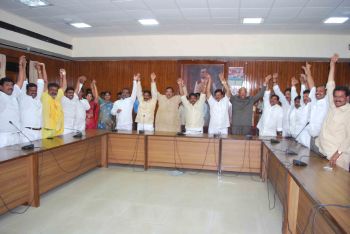 A huge drama has unfolded within the Congress party after the dramatic midnight announcement by Home Minister P Chidambaram to initiate the process of creation of a separate state of Telangana on Thursday.

In what is perhaps the first big blow to the Congress-led United Progressive Alliance's second term, the Congress seems to be reeling under the pressure from different directions.

Senior Congress leaders admit that the entire episode was shoddily handled mainly because of the deteriorating health of Telangana Rashtra Samithi chief K Chandrashekhara Rao and the corresponding rise in tension in Andhra Pradesh.

The midnight decision has dented the Congress' image by creating the impression that the party has succumbed to the pressure from the TRS, feel many Congress leaders.

Many Congress members feel the party's move was ill conceived and was taken in haste and under pressure from a "discredited" leader KCR, who had lost the recent Lok Sabha elections with a dismal performance.

The Congress leadership is now firefighting to keep its Members of Parliament and Members of Legislative Assembly in line and to stop a spate of resignations from agitated anti-Telangana legislators and lawmakers.

They have reportedly asked Sonia to ensure that the resolution is neither brought nor passed in the state assembly.

Andhra Pradesh MPs have told Sonia that the whole episode has made a hero out of KCR, who has taken away all the credit for the formation of Telangana.

Sonia may meet the protesting MPs again on Friday.

Senior Congress leaders, who are being blamed for the shoddy handling of the incident, have instead passed on the buck to the party president and said that it was Sonia who took the decision at the core committee meeting on Monday.

This was reportedly later communicated to the prime minister after his return.

Interestingly, sources from the party said, Finance Minister Pranab Mukherjee is the only person who has successfully resisted such pressure on earlier occasions. But the minister was in Jharkhand on Wednesday and could not attend the two core committee meetings, during which the final decision was taken.

In Hyderabad, the state cabinet had planned to approve the resolution on Thursday afternoon and thereafter to present it before the assembly for consideration.

However, this did not happen, as agitated MLAs of the Congress, the TDP and the Praja Rajyam Party instead focused on submitting their resignations to the speaker.

So far, around 95 MLAs have given their resignation to the speaker, though none of them have been accepted.

Though the Congress has made the announcement, it may have a tough time gathering consensus in the state assembly on the issue.

While Chief Minister K Rosaiah has declared that there would be no resolution on the formation of Telangana until a consensus was reached, MLAs from different parties have begun protests.

And with 100 MLAs on the warpath, the consensus does not seem to be a reality in the near future.

Telugu Desam Party chief Chandrababu Naidu has blamed Sonia for the entire confusion. Among others, Naidu has also done a U-turn on his earlier decision to support the formation of Telangana and has now announced that he would not support it.

Also, with Hyderabad as the bone of contention between the two sides, the Telangana tussle is far from over.