News
Business
Movies
Sports
Cricket
Get Ahead
Money Tips
Shopping
Sign in  |  Create a Rediffmail account
Rediff.com  » News » 'Prabhakaran was a good weapon to use'

'Prabhakaran was a good weapon to use' 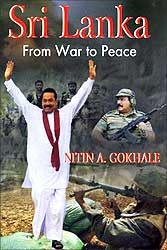 Ever since the war in Sri Lanka ended, one question that has persisted is India's role in the battle against the Liberation Tigers of Tamil Eelam.

In this interview with rediff.com's Krishnakumar P, Gokhale discusses India's role, the death of LTTE chief V Prabhakaran, the lessons for India and how Sri Lanka still looks at its big neighbour with respect.

How exactly did Prabhakaran meet his end?

In the last two days, the Sri Lankan army had intelligence that all the top LTTE leaders were in a narrow lagoon. They knew this from people who were coming out, and also one of his bodyguards who was captured.

The LTTE had tried to break through that lagoon. They launched waves of attacks, like they are known to do. The idea was to come out of the lagoon and get into the jungles of Mullaitheevu.

If the rest of the top leaders had managed to escape, the war would have been extended. But the army had deployed two defence lines and one of the reserve forces.

When they spotted some movement in the mangroves, they engaged in a gun battle and the top leaders were killed. When President Mahinda Rajapakse addressed the nation, he didn't mention anything about Prabhakaran.

Then Colonel Karuna was flown in to identify the body. It took three hours for a positive identification, as they call it.

You have been following this war, Eelam war 4, since it began...

The day after the failed assassination attempt on Lankan army chief General Sarath Fonseka, I went to Colombo and went to the east where the fighting was happening...

Did you get a sense then that this would be the biggest and bloodiest phase?

I could sense that this army was taking losses. Earlier leaderships did not want to take losses. But that this leadership was different was very evident. But it did not seem very apparent till January 2007.

What were the key aspects of Eelam 4?

As General Fonseka told me: "This time we were playing for a win, not a draw." Earlier, governments would go a distance and pull back. But this time the politico-military objective was to finish the LTTE militarily. Human rights be damned. The Tamil issue, the devolution of power would all come later, it was decided.

The second key thing was the total synergy between the three forces, which was never seen before.

Earlier, the navy used to be their weakest link. It had large boats that used to come under LTTE suicide boat attacks. When such a boat went down, it was a loss of about 40 lives and $15 million.

The (then) naval chief (EM>Admiral Vasantha ) Karannagoda said 'Let me take them on at their own game.' He started building smaller boats. They were called arrow boats.

The navy started adopting the LTTE's swarming tactics. The air force too.

Leadership makes a difference. The air force was earlier basically an air transport wing of the army. This time, helicopter gunships were used, casualty evacuation used to happen. So the army knew it would be backed fully.

What was the single biggest turning point?

When they took the east, they realised the LTTE could be taken on. That was the biggest morale booster. Another thing was that the international atmosphere had changed after the 9/11 attacks in the US.

How will you quantify India's role?

When Rajapakse took over, he came to India within a month of taking oath. Initially, he was also saying that he would negotiate. He added that he didn't think the LTTE will be interested.

India straightaway told him that it won't give Sri Lanka offensive weapons.

Within a while of liberating the east, two teams comprising three members each were set up on both sides. They were constantly in touch. Thus, India was always in the loop.

We gave them MI-17 helicopters, but told them to fly those in their colours. The Indian Navy also played an active part in the LTTE's defeat. And we gave them intelligence.

We also denied the LTTE space to come out. We shut the door on them.

India was very clear that the LTTE was a terrorist organsiation. India said 'Go ahead with your operations', but was very clear in telling Sri Lanka not to harm civilians.

In percentage terms, how much did India help Sri Lanka in the war against the LTTE?

Very important. Lanka knows despite the hue and cry, India cannot be ignored. And Sri Lanka holds India in respect.

India was quietly supportive of the military and also helped with humanitarian assistance.

Although there is a school of thought that India is no longer important, there is not enough evidence. The port that China was given, remember that they came to India first.

Only when India refused to give them arms, did they go elsewhere. But they have given another port, the northernmost, to India. Trincomalle is with India.

India's importance in the public eye may have diminished. But the Sri Lankan State knows it is a big power.

What role did China and Pakistan play?

China's role is mostly commercial. They gave out weapons at a discounted rate and also gave them a line of credit.

Pakistan mostly gave them training because India expressed its inability to do that. Although, I must say that about 800 officers come and train in India every year. Most senior officers I met in Sri Lanka had done at least three courses in India.

Pakistan's and China's help was mostly commercial in nature and they were able to be open about it.

As I say in the book, Sri Lanka won this war with China and Pakistan's open backing and with India's covert support.

So, the most hands-on help was given by India?

Absolutely. There is this lobby in India that is anti-China. They are obsessed with China. Even in Myanmar, only after India declined did they go to China.

What are the lessons that we can learn?

This is the only second instance in the world in the last 50 years where an insurgency has been put down militarily. Here, we don't do it. Especially in the last 30 years or so it has never happened.

But I don't think we can repeat what happened there. There are some lessons, but we can't take the full template because India is a much more open society and vibrant democracy and has a stronger press.

Can the North-east problem or the Naxal problem be solved militarily?

In the North-east or Naxal-controlled areas or Kashmir, you can't do that.

The lesson is that you can take a military solution up to a point. But you also have to give the military a free hand. In India we always interfere. Be it with ULFA (the United Liberation Front of Asom), the Naga rebels or in Kashmir, as they were going to deal a final blow, you pull them back.

Once you have decided on it, you can't succumb to the liberal view.

Any non-military aspects of this war that stood out for you?

Nobody was ready for the kind of people who came out of LTTE controlled areas. At one point, 80,000 people came out in one day. If not anything you have to at least feed them.

Lanka failed to gauge the humanitarian issue. They could have done better. They never have dealt with this kind of thing. This is where the expertise of an army like India comes in. A force like the Indian Army would have handled it far better.

Politically, why do you think the ruling party fared badly in two local bodies election recently?

That will happen. The Tamil National Alliance has a hold in certain areas. That shows that like the Rajapakse brothers keep saying, they did not rig it. So they will see it as a victory.

Rajapakse has shown in the final analysis that a small nation can eliminate terror and still stand up firm against the West.

There are a lot of games going on in the Indian Ocean. The US wants a lever with Sri Lanka. Prabhakaran was a good weapon to use. Likewise the Scandinavian countries were the arms suppliers to the LTTE.

In fact, Fonseka told me on record that 10 minutes before they were killed, ambassadors were calling up the defence secretary (Gotabaya Rajapakse, the persident's brother) to save them (Prabhakaran and top LTTE leaders).

Fonseka said any fool would have known that a ceasefire appeal at that time was to save Prabhakaran and not the people, because there were no people there.

The issue had two aspects: Military and political.

Tamils will very frankly never get the kind of autonomy they have been demanding. But Sri Lanka now has to treat them with dignity. The death of one Prabhakaran should not give rise to another.

This is the chance for Rajapakse. He cannot afford to go wrong. There is too much international scrutiny. India has told them, 'We supported you in the international fora but that doesn't mean you can act with impunity...' So, the real test is to win the peace.

Also read: How India helped Lanka destroy the LTTE
How the Lankan army crushed the LTTE
Is it the end of the LTTE?
After Prabhakaran, what next?
It's confirmed: Prabhakaran is dead

Govt may clear 5 of 7 Collegium recommendations

LTTE's still the choice in some parts of Sri Lanka