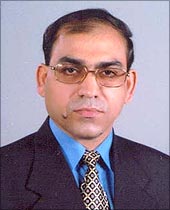 Dr Jumma Khan Marri is a Baloch political leader and son of the legendary Baloch leader Mir Hazar Khan Marri who led the Baloch freedom struggle in the 1970s and 1980s.

Dr Marri did his schooling in hiding in Sindh, Hyderabad and Karachi at the height of the military operation in Balochistan. His family was on top of the list of most wanted people by the Pakistani military and the Directorate of Inter Services Intelligence.

During this time many Balochs were forced to migrate to Afghanistan. Dr Marri also migrated and completed his schooling at the K V K Indian central school in Kabul. He went to Moscow in the then Soviet Union in 1986 along with many other Baloch students for his higher education; he acquired his MD in 1994 at the Russian State Medical University, and subsequently got his Ph D in immunology and allergies at the same university in 1998.

He returned from Russia in 1999 with the aim to help his divided but freedom-loving people. He had a vision to unite the Baloch people under one flag and so he formed the Baloch Unity Organisation. However after General Pervez Musharraf took power in a coup in October 1999 and began military operations in Balochistan, Dr Marri was forced again into exile in Moscow.

But he continues the fight and highlights the plight of his people through the media and his Web site www.balochunity.org.

He articulates the struggle in an e-mail interview with rediff.com's Sheela Bhatt.

What is your response to the mention of Balochistan in the India-Pakistan joint statement issued in Egypt?

Pakistan has always used the Baloch issue as a pretext to prove to the world that it is a victim of terrorism though in fact it exports terrorism. The Indian involvement in Balochistan has never been beyond moral support.

The joint statement cuts two ways -- on one hand it is good that the Baloch issue was internationalised on the other it can be detrimental to Baloch interest as Pakistan is using it as a stick to beat the Baloch freedom struggle by presenting that it being supported by India.

What are the real threats to Balochistan?

The real threats to Balochistan in concrete terms come from the States of Pakistan and Iran because they are physically occupying Balochistan. These States are repressive, intransigent and colonialist. It is for this reason that there is armed resistance in Balochistan.

Another tangible threat is the government-sponsored Talibanisation which is being implemented to oppose the nationalists.

There is danger that powers like the US and Russia, in pursuit of their national interests, may either help to crush or if it suits them may promote the national struggle and attempt to influence it.

Balochistan also faces a credible threat from ultra-nationalists in Afghanistan who dream of a 'Greater Afghanistan' and eye a large portion of Balochistan territory on flimsy historical evidence.

The greatest threat to Balochistan is, however, internal and that is the disunity among the Baloch themselves.

Are you worried about the Talibanisation of some areas of Balochistan? How is your party engaged in thwarting it?

This is very serious matter which concerns not only Balochistan but the entire world community. Your asking this question is proof of that concern.

In that regard I quote Sanaullah Baloch who disclosed that the supporters of the Taliban have captured land worth Rs 2 billion in the eastern and western parts of Quetta with the covert support of the 'establishment' in order to undermine the Baloch nationalist movement and promote Talibanisation in Balochistan.

American officials believe that Taliban leaders are freely operating in and around Quetta and are actively involved in the unrest in southern Afghanistan.

The Baloch are secular people and do not take religion as an issue to fight for, we believe religion must be a personal matter between a believer and god. My organisation along with all other Baloch parties and organisations are doing whatever possible to counteract these jihadi fanatics.

What is your response to Pakistan's allegation that India is engaged in covert activity in Balochistan from its consulate in Kandahar?

These are old, baseless allegations. The consulate is well inside Afghan territory and far away from the hot spots in Balochistan.

To the best of my knowledge the consulate in Kandahar has nothing to do with the resentment and resistance that the Pakistani State faces in Balochistan.

Moreover, the borders are controlled by the Pakistani forces and if in fact help is coming through than it is their ineptitude which is to blame.

Don't you think any kind of support from India will also affect India's relations with Iran?

Well, first let that long-awaited support come than we can assess the negative relations. If India decides to help the Baloch freedom struggle it will certainly be resented by Iran. When you do a good deed it at times irks quite a few and that shouldn't become a reason for not doing a good deed.

What is the human development index of Baluchistan society? Please give us some figures.

To present the grim reality of economic deprivation and poverty I quote experts who have intimate knowledge of the conditions there. Economist Dr Kaiser Bengali says, 'An overview of the development scene in Balochistan is discomforting and the extent of relative deprivation in the province is appalling. Eighteen out of the 20 most infrastructure-deprived districts in Pakistan are in Balochistan.'

'The percentage of districts that are classified as high deprivation stands as follows: 29 per cent in Punjab, 50 per cent in Sindh, 62 per cent in the NWFP, and 92 per cent in Balochistan.'

'If Quetta and Ziarat are excluded, all of Balochistan falls into the high deprivation category. And Quetta's ranking would fall if the cantonment is excluded from the analysis.'

'The percentage of population living in a high degree of deprivation stands at 25 per cent in Punjab, 23 per cent in urban Sindh, 49 per cent in rural Sindh, 51 per cent in the NWFP, and 88 per cent in Balochistan.'

'Measured in terms of poverty, the percentage of population living below the poverty line stands at 26 per cent in Punjab, 38 per cent in rural Sindh, 27 per cent in urban Sindh, 29 per cent in the NWFP, and 48 per cent in Balochistan.'

Over 50 per cent its population subsists below the poverty line.

A horrific picture emerges if one surveys the maternal mortality rate which is 650 per 100,000 births in Balochistan while it is 281in Karachi. This is double the national average. Infant mortality in Balochistan is 158 deaths per 1,000 live births.

Even the Democratic Republic of Congo's average of 126 is lower while Pakistan's national average of 70 is less than half.

The figures in education are equally depressing, over three-fourths of women and two-thirds of population above ten are illiterate.

The conditions in affected Marri-Bugti areas and among the Internally Displaced Persons are much worse. Take the example of Bugti area. Though gas was discovered in Sui in 1951 and meets approximately 45 per cent of the country's total gas production and is worth Rs 85 billion annually what Dera Bugti receives in return for the wealth it generates is evident from the UNDP Human Development Report 2003, which ranked Dera Bugti last among the 91 districts of the country on the Human Development Index.

What is the present political situation within Balochistan?

The present situation was perspicaciously summed up in an interview to a television channel, ironically by the former Balochistan inspector general Asif Nawaz Warraich. He said, 'There is political insurgency in the province'.

This widespread and protracted upheaval, political insurgency, cannot be brushed aside as 'foreign inspired'. It mirrors the intensity and scale of the resentment and desperation felt by the people at the existing state of affairs and underlines their wish for a quick radical change.

The situation in Balochistan has deteriorated rapidly since the brutal murders of Baloch National Movement chairman Ghulam Mohammad Baloch, Lala Muneer Baloch and Sher Mohammad Baloch of the Baloch Republican Party in Turbat.

Media reports indicate that resentment has reached an unprecedented level and on May 9 Baloch separatists ransacked an English-medium private school in Quetta for performing the national anthem and hoisting the national flag.

A teacher was beaten up and the school administration warned that they would not hesitate to kill students and teachers if this practice is not stopped.

In April, Balochistan Governor Zulfiqar Ali Magsi lamented that, 'Although I am a representative of the centre I was never taken into confidence by Islamabad on the Balochistan issue'. Former Balochistan chief minister Jam Yusuf's gripe that the discretionary funds of the Punjab CM were much higher than Balochistan's development budget proves the point.

Chief Minister Nawab Raisani recently proposed that all the federating units should be given provincial autonomy on the basis of a 1940 resolution and they should have control on their natural and other resources.

Balochistan Assembly Speaker Aslam Bhootani said in an interview that 'the trust deficit between the Baloch leadership and Islamabad was a major impediment to resolving the Balochistan issue'. He also said 'there was a perception in Balochistan that the Frontier Corps was running a parallel government in the province'.

If the speaker says that there is perception that the Frontier Corps is running a parallel government then the problem is acute.

The attitudes and resolve have been hardened and strengthened by the continuous and arrogant disregard of the Balochs's right over their political future and resources.

All the coalition parties in the provincial government want a piece from the pie. They diligently rubber-stamp all directives of the centre to avoid endangering their lucrative perks and businesses.

Regrettably, the cabinets and assemblies of the past have also been equally ineffective and docile. They have neither solved the issue of 'missing persons' nor put an end to military operations; target killings of Baloch leaders as in Turbat and 'forced disappearances' continue.

Their failures have disillusioned the people entirely who are also rapidly losing faith in the political process.

How can the people of India help you when they are tackling the issue of Jammu and Kashmir?

India needs to solve the Kashmir issue sooner rather than later because not all those opposing India in Kashmir are Pakistani agents. There have been mistakes which need to be recognised and rectified.

Helping the Baloch people cannot and should not be hampered by the issue of Jammu and Kashmir because Indian resources are neither few nor small and the help can be moral, political and financial.

Physical involvement is not only improbable, but would not be welcomed by the Baloch people.

'India is not helping the Baloch freedom struggle'