'India is not helping the Baloch freedom struggle' 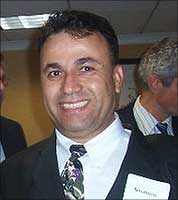 Dr Wahid Baloch is President of the Baloch Society of North America and is considered close to many senior leaders in Pakistan and Iran. He is a medical professional living in Florida. He spoke to Nagesh Bhushan on the recent Indo-Pak joint statement in Egypt and what it means for the Baloch fight for freedom.

The recent Indo-Pak joint statement in Egypt raised considerable ruckus in India for including restive province of Pakistan, Balochistan. Do you think that Baloch issue is internationalised by this?

Depends on what you mean by internationalised? If you think internationalising means people around the world came to know about what is going on inside Balochistan, then yes, but if you mean recognition of Baloch struggle for freedom by United Nations or world leaders, then no. At this point, neither the UN nor the world leaders have recognised Balochistan as an illegally occupied land which the Baloch people are demanding.

In Pakistan some groups questioned not including Kashmir in the joint statement. Why do you think Kashmir was excluded?

The Kashmir issue is created by Pakistan. There is no Kashmir issue. Unlike Balochistan, which is an occupied land, Kashmir was and is an integral part of India. Kashmiri separatist religious movements only exists and is based in Pakistani occupied Kashmir, where the Inter Services Intelligence and military men train Kashmiri terrorists and send them to India to kill innocent people.

Is India aiding the Baloch struggle?

No, not yet. We have not seen any help coming from India or any other country so for, but we ask all the nations including India to help us and support our just cause for freedom.

In the past Pakistan made similar allegations that they had proof of Indian involvement in the Baloch region but didn't produce any evidence. Why do you think Pakistan included Balochistan in joint statement now?

Pakistan is trying to divert the attention of Indian government and world community from its involvement in the Mumbai terror attacks and other Taliban sponsored activities. They also want to use this 'threats in Balochistan' and 'Indian involvement' as a pretext to pave the way to intensify their ongoing military operation in Balochistan and to justify their inhuman barbaric actions against the Baloch people.

If not India then who is arming the Baloch militants?

Nobody is arming the Baloch people. These are baseless allegations of Pakistan to use as pretext to continue their aggression against the defenseless Baloch people.

Arms are available in open market, in fact everywhere in Pakistan. If you have the money, you can buy a tank, even in Islamabad, Lahore or in Karachi. Corrupt Pakistani military men will bring it to you at your doorstep. You don't have to go get it. They will sell you anything for money.

Is there any rationale in Pakistan's allegations about India arming Baloch militant groups while seriously engaging in negotiation with Iran and Pakistan on the gas pipeline?

Pakistan's creation was the biggest blunder of history, it is an artificial country. How can you expect an irrational Pakistan to talk and act with some sense of rationale?

As for as the gas pipeline is concerned, the Baloch people cannot guarantee its safe passage through Balochistan, because the final beneficiary of this pipeline is the Pakistani military and the Iranian regime -- not the people of Balochistan. We are in the midst of our freedom struggle against Pakistan, therefore it is advisable for India to exercise caution before investing in this project.

Do you support the Iran-Pakistan-India gas pipeline?

I will support anything that benefits the Baloch people and Balochistan. But as I said we cannot guarantee safe passage now. We do not support Pakistan to continue loot and plunder our resources and treat us as one of their colonies.

The Iranian Baloch group Jundullah uses religion to fight against the Shia state. Pakistani-based groups are considered secular and never use religion in their struggle against Pakistan. Do you support acts of Jundullah?