Lessons for India from the Thai insurgency 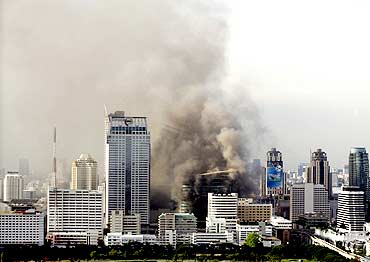 Rajeev Srinivasan on why the Thai troubles should be an eye-opener for India, which faces similar insurgents with covert agendas.

Despite pious promises in the past about 'looking East', it is clear that the Indian establishment, including the media and the foreign ministry, remain obsessed with the West and Pakistan. Events unfolding in Thailand have remained under the radar in India, even though the parallels are ominous, both regarding India and Nepal.

Consider: in Dantewada, Communist terrorists first massacred 76 policemen; they then proceeded to massacre 36 civilians riding in a bus. The first instincts of both the Congress and the media are to justify the terrorism based on the same tired clichés about poverty fomenting violence. Aren't they embarrassed to trot out this hoary old chestnut?

Also consider Hyderabad in the wake of the Telangana agitation: I am sure investment decisions have been put on hold and real estate prices have dipped along with consumer and investor confidence. Similarly, Thailand's economy will take a hit, as ASEAN neighbors Malaysia and Indonesia suddenly look more stable.

Finally, look at Nepal: a functioning monarchy has been replaced by an aggressive Communist regime, with the expected results -- political turmoil, and anti-national forces including Chinese proxies, missionaries and jihadis having a field day.

The roots of the Thai problem are murky, but the event that triggered off today's crisis was the coup in 2006 that overthrew the government of the billionaire industrialist Thaksin Shinawatra. I was in Thailand in 2006 during the revered King Bhumibol Adhulyadej's 80th birthday celebration -- and it was a grand gala affair. My previous visits had been over ten years prior, and I was impressed at how far Thailand had come in the interim: it had the makings of an intermediate economic power.

Thailand has left India in the dust in economic growth: an indicator is the exchange rate between the Thai Baht and the rupee. When I first went to Thailand, there was rough parity between the two; today the Baht is 40 percent higher. The ramshackle capital with run-down roads and unbelievable traffic jams (people used to carry portable urinals in their cars) was transformed by an elevated expressway. The skyline is impressive, and the city looks clean, orderly and prosperous, in a Singaporean kind of way.

This prosperity is based on small to medium industry, especially textiles, electronics and automobile components. Endemic political instability, including bloodless military coups, did not hurt because there was always a symbol of strength and continuity -- the royalty. Thais revere their monarchy, and the King could always resolve any problems.

Until now, that is. The army and police seemed helpless against a few thousand insurgents who barricaded themselves inside the city, urban guerilla warfare, the King hospitalised and silent -- this is a nation under siege, not the kind of place where locals or foreigners will risk their money. This will hurt the Thai economy.

Who gains from this? Malaysia and Indonesia, especially the former. There is a festering separatist movement in southern Thailand, which is ethnically Malay and Muslim. Given the Malaysians' increasing religious fervour -- they have been tyrannising religious minorities recently -- Malaysia may be offering moral and material support.

The apparent demand of the insurgents is justice for the poor who live far away from the glitzy capital, in the north and northeast. I suspect this is a slight exaggeration, along the lines of what Communists claim in India's tribal belt. The Red Shirts in Thailand may be acting principally on behalf of Shinawatra, who wants to be prime minister again, to ensure the survival of his business empire, not to mention avoid a $1.4 billion fine. The Communists in Jharkhand may be agents of China, intent on wrecking India from within. None of them is particularly interested in the poor, except for rhetorical purposes.

What alarms me about the Bangkok situation is that I can easily imagine a similar situation in New Delhi, with the capital held hostage by gangs of Communist insurgents, quite possibly barricaded inside the Jawaharlal Nehru University campus, where they gain succour and support from armchair urban guerillas. Just as in Bangkok, we might watch on TV the hopes of a stable and progressing Indian economy going up in thick, black, acrid smoke -- welcome back to the dark ages of 'roti-kapda-makaan' and the rent-seeking neta-babu-journalist nexus, a preview of which we got with the 2G scam.

There are differences, of course. The Indian Army is not involved in business, whereas the Thai army is a smaller version of the Pakistani army in that context -- it runs many industries, and is not dependent on the national government for all of its budget.

But the eerie parallels to, say, Nepal, are many: the end result may well be a 'secular' movement to overthrow the Buddhist monarchy, which will then be portrayed as roundly corrupt, godless, feudal --  whatever else the spinmeisters can think of.

The destruction of the Thai State would be a tragedy. It was just about the only Asian nation that, through some fancy footwork, avoided being colonised. This has given the average Thai a certain self-confidence. Secondly, turmoil is likely to be exploited by vulture-like missionaries descending on the country, much as they did in the aftermath of the tsunami elsewhere. In Nepal, it is reported that a million people were converted to Christian sects after the Communists took over. Similarly the number of mosques, and presumably adherents, has soared. We might find the same in Thailand.

Odd, isn't it, that there are Communist revolutions in Hindu and Buddhist monarchies, but never in Christian or Muslim monarchies? Coincidence? Communists have been accused of being 'useful idiots' for others. Let us note that, according to reliable sources, the manifesto of the Communist terrorists in India speaks at length about extinguishing 'imperialism' and 'liberalism', but is silent about 'poverty' and 'tribals'.

The extinction of the State, neo-colonisation and neo-conversion -- these are the downsides of globalisation. India would be well-advised to watch the Thai example with great care.

Image: A shopping mall that was ransacked and set on fire during clashes in central Bangkok on May 19 | Photograph: Chaiwat Subprasom/Reuters.

Explained: Why Bangkok is burning