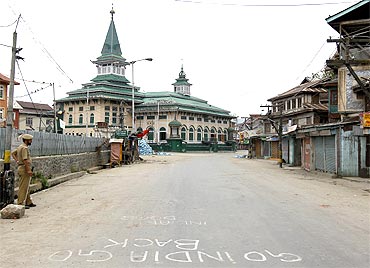 Image: A policeman stands guard along a deserted road in Srinagar

To curb the spread of violence, authorities on Wednesday clamped a curfew on more areas in south Kashmir, where three youths were killed when Central Reserve Police Force troopers allegedly opened fire during clashes with protestors on Tuesday.

Authorities imposed curfew in south Kashmir's Anantnag town in the wee hours of today morning and deployed hundreds of police and Central Reserve Police Force troopers after the town was rocked by violence. Incidents of arson and clashes between protestors and security forces were reported late into the night.

Army troops in full battle gear moved in vehicles across town to defuse the tension that has gripped it for the last one week. Senior officers of the army and the police were in the vanguard of the convoy that carried out the flag march. 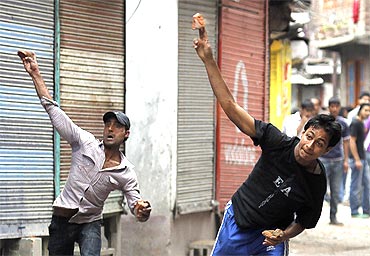 Image: Kashmiri protesters throw stones towards the police during a protest in Srinagar
Photographs: Fayaz Kabli/Reuters

Although no fresh incident has been reported from any area in the valley so far, police described the situation as tense.

Three persons were killed and two others injured when CRPF personnel allegedly opened fire at a group of stone pelting protestors in Anantnag, 55 kms from Srinagar, on Tuesday.

However, locals alleged that CRPF personnel barged into houses and shops while chasing the stone pelting protestors. They alleged that the paramilitary personnel shot the victims from a close range inside a house and a bakery shop.

While two persons died on the spot, the third succumbed to his injuries on the way to the hospital, said the police. 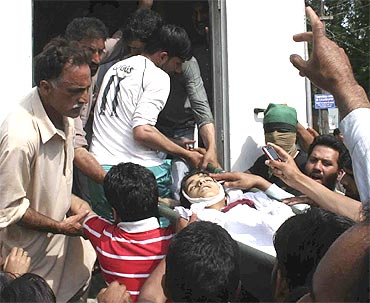 Even though the security forces are patrolling the town, incidents of protestors defying curfew and pelting stones have been reported.

The authorities have also imposed curfew in the adjoining towns of Pulwama and Kulgam.

The old city in Srinagar remained under curfew for the second day in a row today. Incidents of stone pelting were reported from some areas of the city as mobs damaged a portion of the railway track connecting north Kashmir to south, near Moochua area of the city.

With the killing of three more teenagers in Anantnag, the number of youths who have died in firing allegedly by security forces during the past six days has gone up to eight.

As many as 11 people have been killed in firing incidents involving security forces in the past three weeks. Life continues to be paralysed in Srinagar and other parts of the valley in response to a strike called by separatists. 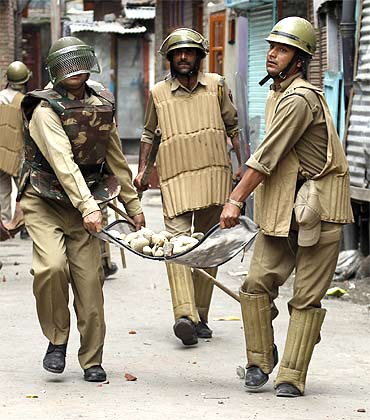 Shops, markets, government offices and educational institutions remained closed in Srinagar and transport was off the roads, officials said.

Chief Minister Omar Abdullah on Tuesday evening made an appeal for peace, vowing to ensure the return of normalcy soon. He slammed 'anti-national and vested interests' for instigating violence.

He also warned that "wherever curfew has been imposed, will be enforced strictly. The cycle of violence has to stop".