How a 14-yr-old saved her brother from death 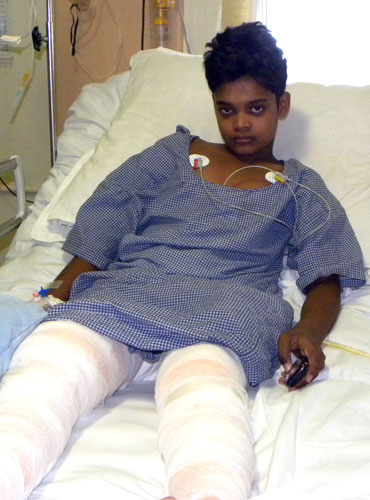 Image: Abhijit Gautam, 12, recovering from gun-shot wounds in a Raipur hospital.
Photographs: Seema Pant Archana Masih
A 14-year-old saved her younger brother's life after he was hit by bullets when Naxals attacked her home in Chhattisgarh.

A policeman countering the attack was shot in the face and lies in hospital, unable to speak.

Archana Masih meets two young people in a Raipur hospital who convey the human tragedy of a conflict that is destroying lives -- on both sides. Photographs: Seema Pant.

Dr Pankaj Dhabalia picks up the X-ray plates and holds it against the light. "Can you see the two bullets in his legs?" he asks, pointing at the cylindrical pellets lodged in the limbs of 11-year-old Abhijit Singh Gautam.

I have never seen an X-ray of a gun-shot wound and try to pay attention to the doctor explain the procedure of the removal of the bullets, but my mind is focussed on the little boy lying in bed who has the same first name as my brother.

I am amazed at the child's composure just a few days after major surgery. His legs are bandaged, his arms bear abrasions from an explosion, but his face does not betray any sign of pain, rather with a certain amount of precociousness he raises his head to listen and goes back to playing a game on the cell phone.

If you did not know about his grievous injury, you would think here was a child recovering from routine surgery.

But Abhijit has survived a fierce armed attack when his home in Nakulnar in Chhattisgarh's Dantewada district came under fire from between 100 and 150 Naxals, the ultra-left group fighting the Indian government in seven states.

His paternal uncle and another acquaintance died in the attack. A police constable, among the five policemen countering the attack, was shot in the face.

The policeman, 24-year-old David Toppo, lies three beds away, his jaw held together with plates and bandages, as he communicates with his distraught father, a guard at the State Bank of India, with a pencil and notebook.

'Didi should get the President's award for her bravery' 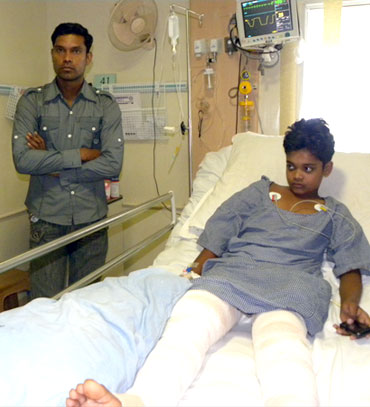 Image: Police constable N Yadav with Abhijit. Yadav was one of the 5 guards defending Abhijit's house when Naxals attacked that night.
Photographs: Seema Pant
On the night of July 7, Abhijit Gautam's family was asleep after celebrating his elder sister Anjali's birthday who turned 14 that day. They were woken up with bullets and grenades after midnight.

His father, mother and brother fled to the first floor of the house, while Abhijit, his sister and grandmother were trapped in a room on the ground floor.

"They wanted my father. I did not tell them where he was. They also wanted his gun. I knew where the gun was, but I hid it under a bedsheet," says Abhijit relating what happened during the three-hour battle that night.

"It was dark in the room. The firing from outside destroyed almost everything -- tiles, glass, lights, tables... The bullet hit my thigh, one injured my knee. In the dark I am not sure whether they could see who they were firing at, they were firing from all sides. I've heard Naxals don't kill children. I was bleeding so heavily -- you could fill half a bucket with the blood flowing out of my wounds," says Abhijit soon after a member of the hospital staff has come and cleaned him.

We stand outside his room and hear him crying in pain as the attendant moves him in bed. His legs hurt when raised to rest on a pillow. The boy who had appeared calm and strong at first is just a child who had gone through something no child -- in Maoist territory or outside -- should ever have to.

If not for his sister, Anjali, a Class 9 student, Abhijit may not have survived that night.

With courage far beyond her age -- which Abhijit relates with great pride -- she tied her brother's bleeding legs with a bedsheet, carried him on her back and ran out of the house that was under siege.

She did not stop till she reached the safety of their uncle's house half a kilometre away.

"I saw her run out from my position on the first floor," says police constable Narsingnath Yadav, one of those on guard duty at the house that night, "She was carrying him on her back and there was firing happening from the gate. I asked her where she was going and she said she was taking him to their uncle's house."

"Didi ran and we were lucky that we did not come under any more fire and reached our uncle's home," continues Abhijit, "At that time all I was thinking was that nothing should happen to mummy and papa. I was taken to hospital in an anti-landmine blast-proof vehicle."

"Didi should get the President's award for her bravery that night."

David Toppo was shot in the face, his lower jaw is broken 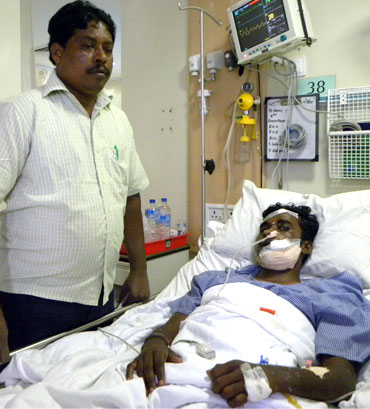 Image: Constable David Toppo with his father Eliezer, left, a bank guard. The bullet broke Toppo's jaw.
Photographs: Seema Pant
Fortunately, Anjali did not suffer as much as a scratch and her father feels the children will overcome the trauma of that night gradually. The family observed the 13th day ceremony of the passing away of their relative three days ago.

"My son showed such bravery that night while the courage of my daughter saved his life. She was adamant about getting him out of there inspite of the grave danger -- such is is the power of a sister's love for a brother. They were children and yet my son got hit by five bullets. He was bleeding and the Naxals wanted to know where his papa was. No one is talking about our human rights," says his father Avdhesh Singh Gautam, referring to those hours as the dance of death in his home.

Gautam was a former vice president of the Kuwakonda Janpad panchayat for three terms (15 years). His wife Pushpa was recently elected vice president.

A member of the Congress party, he refutes his reported association with Mahendra Karma, Chhattisgarh's former home minister who launched the controversial Salwa Judum tribal militia against the Naxalites, and denied being involved in any anti-Naxal activity that would make him their target.

"I have lived and worked with the tribals in my area. The Naxals don't like my popularity with tribals. I was also attacked by an AK-47 in July 2008. Some CPI (Communist Party of India) workers aligned with the Naxals are against me," he alleges.

Abhijit will be discharged in a week or so from the hospital in Raipur, after which his wounds need daily dressing. The thigh will also need plastic surgery. Two rods have been placed to fix the bones while tiny crystals caused by the bullets are still caught in his flesh, says his father.

The boy, who wants to be a police officer, changed school some 10 days ago, and while he escaped near death, his impending worry is about missing days at his new school.

David Toppo, the policeman who defended Abhijit's family that night, will need further surgery. Toppo's lower jaw is broken, he lost some of his teeth and his tongue which had split has been stitched.

"The doctors say his healing will take some time. Since my family is in the village I stay at the hospital with him," says his father Eliezer.

David is his eldest son, the only child who is employed while Eliezer's other four children are studying. David, a tribal, joined the Chhattisgarh police in 2008. At 24, he nearly lost his life that night -- he was airlifted in a helicopter -- and remains in ICU almost a fortnight after the event.

He has walked a little for the first time since the attack two days ago, but has not communicated by writing on a notebook lately, says his anxious father.

In the offensive against the Naxals, it is the personal human tragedies of people like young David or 12-year-old Abhijit or poor tribals caught in the cross-fire -- that bring to light the truth that the greatest loss in any conflict is always felt by a grieving mother, a broken father, a tormented child -- and it is almost always borne alone.