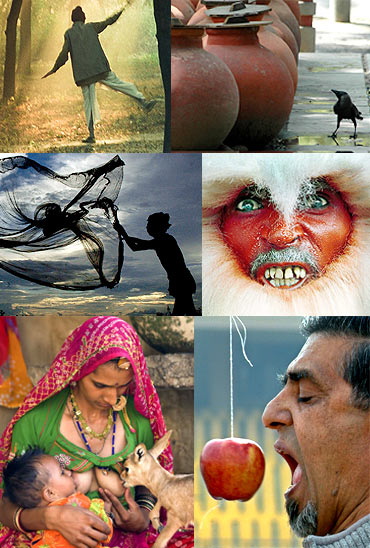 In what can be described as a Maha Kumbh of photography, 60 photo-journalists are currently exhibiting some of their works at the Lalit kala Academy in New Delhi.

The 60 photographers are members of the All India Working News Cameramen's Association -- a pan-India collective of print and electronic media organisations.

Their show, titled 'Big picture', has over 200 evocative pictures that showcase the country's political, geographical and ecological history.

Picking the 10 best pictures from this plethora of riches was an excruciating exercise -- but what needs to be done has to be done.

Here's a list of the 13 photographs that grabbed my eyeballs (not necessarily in any order of preference). Click on NEXT to see their photos... 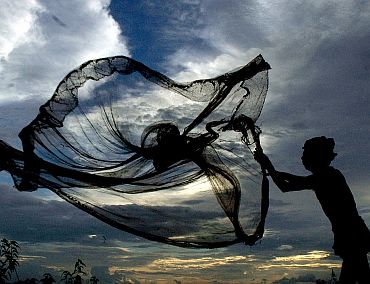 You are highly unlikely to overlook the fisherman's photograph.

The silhouette of the fisherman against the evening sky is nothing less than visual poetry. It was shot in the coastal village of Andhra Pradesh.

The ace photographer is currently in Tripura on a shooting assignment -- much to my regret. 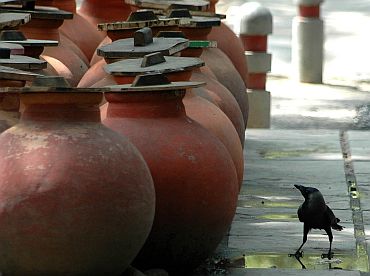 Basu brings alive one's fond childhood memories, of a time when we learnt the story of The Thirsty Crow.

He says he shot this picture in Barakhamba, New Delhi, as a part of a photo-feature one the capital's torrid heat-wave.

"I spotted the crow and waited for about half-an-hour for it to settle down. I had to be watchful of my movements because even a little sound would have scared him away." 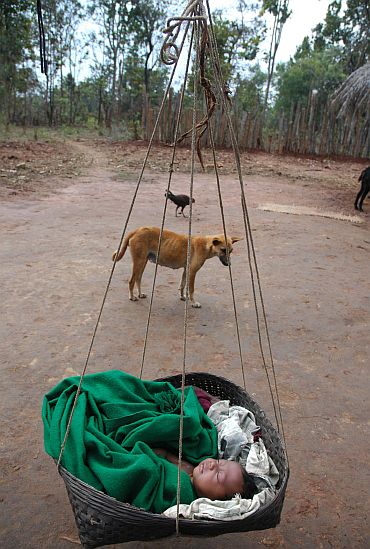 Now that's how you define focus in photographic terms.

Ranjan Basu's picture, shot in a Naxalite belt, of an adivasi baby's cradle hanging from a tree, with the dog standing guard, won him the National Award in 2009. 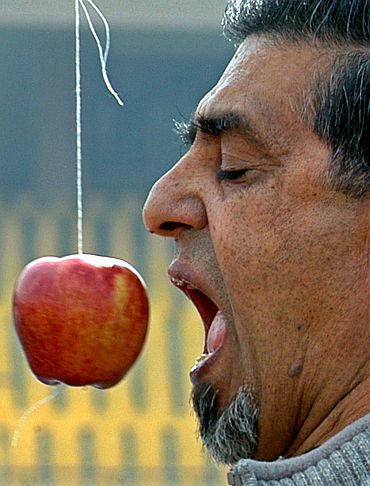 Vipin Kumar seems to emulate ace photographer Henri Cartier Bresson, who said, 'To shoot a candid picture, outside the realm of a photojournalist's assigned field, is a temptation no one can resist, and the urge to trip the shutter at the decisive moment, is nothing but a reflex action'.

Bedi's reflexes need to be applauded for his caricature-like capture of former member of Parliament Jagdish Tytler during a sport meet in the capital.

He is currently a photographer for the Hindustan Times in New Delhi. 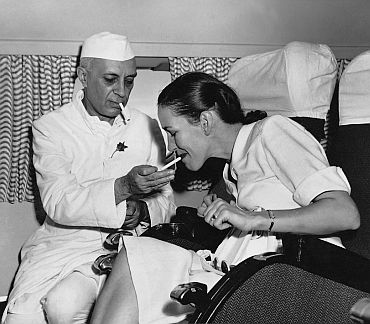 Her camera has captured some of the defining moments in the country's political history.

This black and white picture of Nehru lighting a cigarette for the then British high commissioner's wife is an absolute stunner. 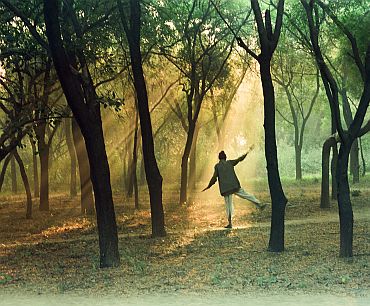 The hues of this picture simply captivate you.

Chaddha says he shot this picture early morning in a park in South Delhi.

"I am a regular morning walker and carry along my camera occasionally. One winter morning in December 2000, I spotted this old man exercising; minutes later, I was astounded to see the way the sun danced upon him. It was a moment I couldn't have afforded to miss," he says.

It was a proud moment for him to see his photograph on the front page of The Times of India, from which he retired the same year. 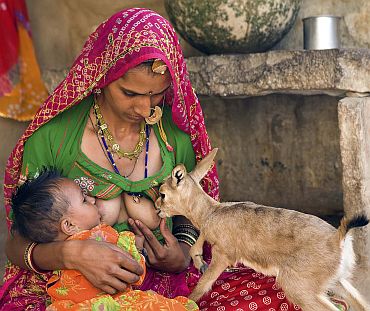 Some photographs are to be admired, some are to be celebrated, but this one has the potential to give you goose bumps.

Bedi says it was photographed when he was working on a new feature in Bishnoi in Rajasthan. The Bishnois worship nature in all its manifestations, and are a conservative community.

"It was hard for an outsider like me to come with my camera to photograph them. One day, I saw that a village dog had killed a chinkara fawn's mother. So the Bishnoi family had adopted him before he becomes prey to other predators in wild and nursed him as if it was their own child.

"I was looking for one picture that can tell the story of their community's strong feeling for the environment. After great difficulty, some six months later, I could get this picture showing how human beings live in harmony with nature."

Vijay and his brother Ajay Bedi are the only Indians whose wildlife film has been nominated for the Emmys. They are also the youngest Indians to be honoured with the Green Oscar. 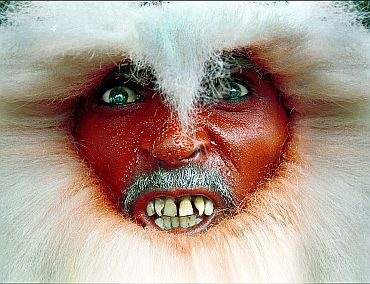 At first glance, you may mistake the man for a mask. The intense look on his face has a tragic story behind it.

Bisht says the man used to dress up as Lord Hanuman in and around the popular Hanuman temple in central Delhi. In 2002, when New Delhi was enveloped in the monkey man care, he lost his bread and butter as the people were frightened to see him.

Bisht is currently working as the photo editor for Outlook magazine. 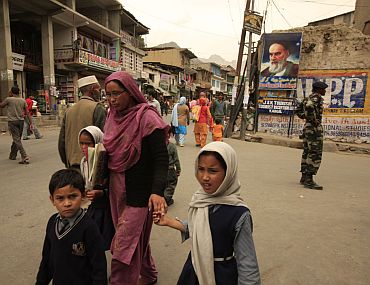 You may escape beauty but pain never fails to find you.

Working in Kashmir is like living on the edge constantly. You have to be practical and keep cool and be ready for anything once you've stepped into the tumultuous land, he says.

In the picture: The bustling Khomeini Chowk in Kargil, named after Iranian leader Ayatollah Khomeini, as his maternal ancestors came from this region. 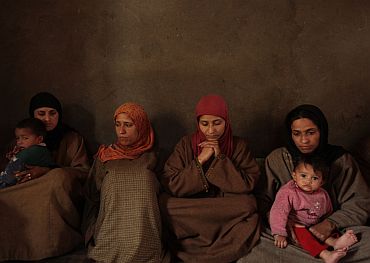 When asked about life-threatening experiences he underwent, Basu replied, "In Nowahatta, once I was photo-reporting the ongoing protest. There a cat-and-mouse game was on between young boys pelting stones at the police and the security forces who were replying with stones and tear-gas shells. Suddenly, stones came hurling at us like lashing rain. We realised that the security forces were firing rubber bullets. There was no place to hide, and I could not see anything as tear gas, bullets and stones engulfed me.

"Suddenly, I found myself caught between the protesters and the armed security forces, who were ruthlessly taking on the former. My cellphone was ringing and I was in a state of shock till I crawled to a safe place. One security personnel told me later that I was in a very dangerous zone and anything could have happened to me."

In the picture: Kashmiri women mourn the loss of their brother in firing at Bomai, on the outskirts of Srinagar. 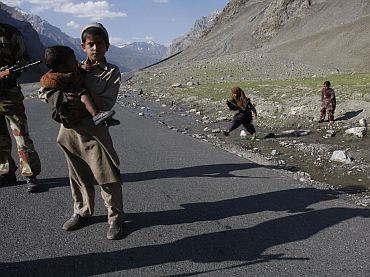 A daring photographer, Basu says he has memorised the bylanes of Kashmir now.

He is currently working on a book on Kashmir, which is expected soon.

In the picture: Children playing in the shadow of the Indian army at Meena Marg, which connects Sona Marg with Kargil, near the Line of Control. 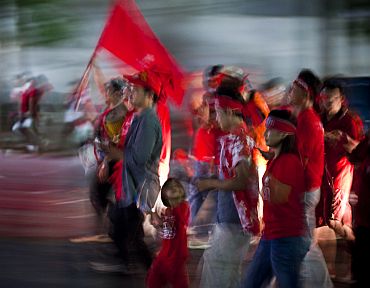 He has blurred the first picture to show life in fast motion.

The photograph shows the Red Shirt uprising in Bangkok, and was shot in June this year. 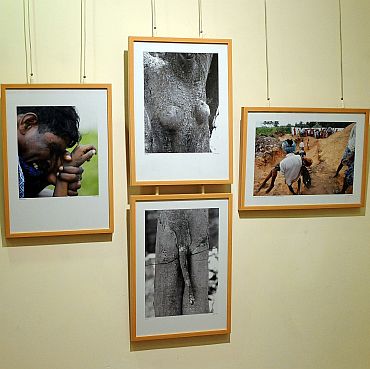 The photojournalist for Agence France Press offers an interesting range of creativity.

The pictures on the left and right were shot after the tsunami that devastated lives in Tamil Nadu in December 2004.

Left: A woman grieves over the body of her son at Silver Beach in Cuddalore,some 185 km south of Chennai.

Right: A man carries the dead body of a girl to a mass burial site at Silver Beach in Cuddalore.

The black and white photographs show Singh's eccentric creativity. He has shot trees in New Delhi that appear to be male and female forms.