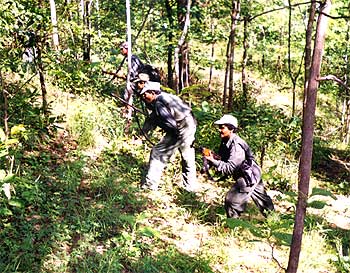 Image: A file photograph shows a Maoist training drill
Photographs: Chindu Sreedharan
In the second of a three-part series on the anti-Maoist battle mounted by security personnel in the jungles of Chhattisgarh, Krishnakumar P reports on security forces bust a weapons manufacturing unit in the forests of Dantewada.

Part I: New war against the Maoists

The most significant aspect of Operation Red Hunt -- the anti-Maoist offensive deep in the forests of Chhattisgarh's Dantewada district -- is the destruction of the rebels's arms manufacturing factory, Chhattisgarh police sources told rediff.com

The operation, launched last week, involved 650 men -- 200 of the Central Reserve Police Force's elite Cobra unit and 450 Chhattisgarh police personnel. It resulted in the deaths of six Cobra personnel including two assistant commandants. So far, the bodies of seven rebels have been recovered, though police sources say a higher number may have perished in the offensive.

"It might not seem special given the kind of casualties the security forces have taken but the most crucial victory is the fact that they destroyed the factory," said a senior Chhattisgarh intelligence officer who did not wish to be named in this report.

The destruction of the factory -- located in Dantewada's Singamadagu village -- is crucial because of the kind of firepower that it had been generating for the Maoists. Image: Security forces patrol a Maoist-infested zone
Photographs: Parth Sanyal/Reuters
Sources said the Maoists had the capability to produce arms and ammunition of the highest quality.

"From what I saw, the machines were capable of churning out SLRs (Self Loading Rifles) and .303s. No one -- baring probably the people most familiar with these weapons -- can make out the difference from the weapons the Maoists were making and the ones from our ordnance factories," the intelligence officer said.

These weapons were not short in terms of firepower either, sources said.

Another officer, who was part of the operation and did not want to be named, said: "These weapons fire just the same kind of ammunition that standard issue weapons do. Probably the only drawback is that their firing rate is lesser than that of the originals. If, for instance, a regular SLR fires 60 rounds per minute, these would fire 20 to 30 rounds per minute. But they can kill nevertheless."

Intelligence sources said weapons made in the factory were sent out to rebels across the swathe of land that the Maoists control across central India.

"The weapons made here were sent out to Andhra Pradesh, Orissa, Maharashtra, and of course, were used in Chhattisgarh itself," the intelligence officer said.

Informed sources estimated that it would take the Maoists a decade if they had to rebuild the factory with similar infrastructure.

'The lathes and machines alone came up to three tractor-loads' 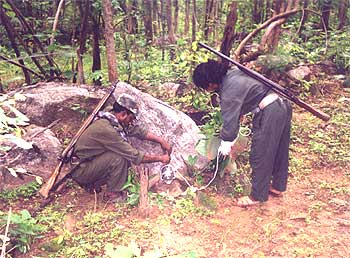 Image: A file photograph shows Maoists training for battle
Photographs: Chindu Sreedharan
"The kind of infrastructure they had managed to smuggle into the forests was staggering. The lathes and machines alone came up to three tractor-loads. They had all the know-how to make sophisticated weapons. This would set back their armed struggle by quite a bit."

"Our estimate is if they were to rebuild a fully functioning factory similar to the one we busted, it would take them 10 years," the officer said.

Furthermore, another senior officer said the loss of the manufacturing unit would cost them at this juncture when the State is stepping up its offensive against the Maoists.

"There is no way they can purchase the kind of weapons they were making. And their other means of procuring weapons -- looting from the police -- will also become tougher due to the extra vigilance by the forces," he said.

What worries security forces is the possibility that the Singamadagu factory may not be the only weapons-making unit the Maoists have.

The Chhattisgarh police had busted another arms factory in January. "We busted a factory in Abujmaad. That was a smaller factory and did not have the capability to manufacture sophisticated weapons," the officer said.

Intelligence sources believe the Maoists may have some more weapons manufacturing units in the forests. "They might have one or two factories in Abujmaad," the officer said.