Leopold attack stirred up their relationship 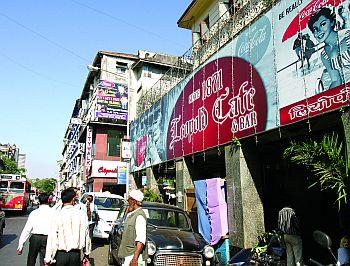 Image: The Leopold Cafe and Bar in Colaba.
Aseem Chhabra in New York
After the 26/11 attacks, Aseem Chhabra spoke to Dara Huang and John Fesko, who escaped the terrorists twice. When he caught up with them recently, he discovered that a lot had changed.

A year can make so much difference in a person's life.

Twelve months ago almost to the day, Dara Huang and her then boyfriend John Fesko --both Americans living in Switzerland -- had made a trip to India to attend a wedding in Goa. They then travelled to Bangalore and, on November 26, arrived in Mumbai on a brief visit and checked into the Taj Mahal Palace Hotel.

Fesko had a couple of business appointments with Mumbai's pharmaceutical companies; Huang wanted to get a taste of the city's street life, which she had heard so much about.

That evening, the couple teamed up for a stroll through Colaba's teaming streets, and stopped for a beer at Leopold Cafe, a storied magnet for foreign tourists. Fesko recognised the restaurant from an article he had read in The New York Times.

When gunfire erupted, it was sudden and shocking; an idyllic evening had turned without warning into an urban nightmare. They somehow escaped the hail of bullets and, when the terrorists moved on, they scurried to the safety of the Taj -- or so they thought, until a group of terrorists arrived at the landmark hotel with guns blazing.

"After we returned to Basel, John and I would wake up with nightmares," Huang said from Hamburg, Germany, as she planned the next phase of her life in London. "But not so much now. They are few and far in between."

She lives still with vivid memories of the attacks. "But it is like how people cope with death," she said. "The initial parting is very traumatic, but over a period of time you learn to cope with the loss."

'John just grabbed me, he threw me on the floor' 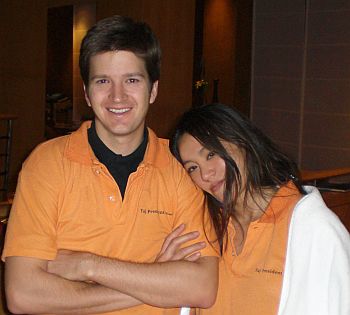 She never sought the help of a therapist to cope with her trauma. "I worked it out myself, talking to friends and family," she said. "They were so curious about the details. It was a really traumatising experience. I never could have imagined that this would happen to me, and to think that we had just come from a wonderful wedding in Goa."

"You know, when something really awful happens to you and you say well, this couldn't be happening to me. And your life flashes in front of you like a movie. When we got back, John and I would talk -- replaying the whole night," she said.

"We tried to piece everything together. We tried to figure out concepts like God and faith. There was a lot of soul searching, questioning and a desire to go out there and help people. Since then, John has made a trip to India for business."

Earlier this year, Huang and Fesko split up. She is now relocating to London to work as an architect.

"There were underlying issues in our relationship prior to our trip to India," she said, adding that after the traumatic experience, she had started to question the permanence of the relationship. In Goa, she met a man who was a part of the wedding party. Eight months later, she reconnected with him and made plans to move to London with him.

"John maintained that he saved my life by pushing me down to the floor at the Leopold Cafe," she said. "And I am sure he saved my life, while he got shot in the cafe. He was hit by a bullet in his leg, while I escaped unhurt."

"When the shots were first heard, there was confusion and John just grabbed me, he threw me on the floor," Huang had told rediff.com last year shortly after the terrorist attack ended.

"My hands were cut, and there was blood. I don't know how. The shots kept going on. Then we had the instinct to run out, and John pushed me down again and this time he pushed me on the sidewalk in front of the cafe." 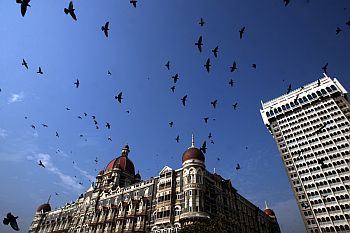 Image: A view of the Taj Hotel, which too was hit during the 26/11 attacks

In retrospect, she says that is pretty much how things played out -- but even so, she says, things may have been fine if she had not fallen on the ground. "Maybe even if I hadn't gotten down, I may still have lived," she said some weeks ago. "I know we had a traumatic experience together."

Fesko declined to be interviewed for this article, stating that he was "just not that excited about revisiting" that experience. But Huang was willing to talk further. She has joined a Facebook group of the Mumbai massacre survivors called 'SURVIVORS of the Mumbai Terrorist Attack 26/11-08.' She became friends with the founder of the group, a woman from Norway -- Line Kristin Woldbeck, who survived the attack at Leopold Cafe though her boyfriend was killed.

Huang's story had a heartwarming sequel. When she fled Leopold Cafe, she accidentally left behind her handbag at the restaurant. Among other things, it contained Fesko's camera, with all the pictures the two had taken during their India trip.

A few months after the attack, the Leopold Cafe management sought them out and returned her handbag, with all its contents intact, including the camera. Later they also received their luggage, including laptops that they had left behind in their room at Taj -- and with the luggage came an invitation to return and to stay at the Taj as the hotel's guests.

"Of course I am not going to stay at the Taj," she said. "That would bring back a lot of the memories."

Recently, she had an opportunity to travel to India for another wedding, but did not take the trip, largely because she was busy planning her move to London. Ironically, her relationship with the man in London did not last long, but the break-up did nothing to change her resolution to move.

"Change is good," Huang said. "And I figured that if I could survive the terrorist attack on Mumbai, then I can manage to be a single girl in London."