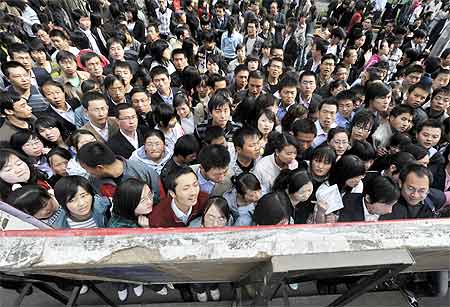 China will launch an attack on India before 2012.

There are multiple reasons for a desperate Beijing to teach India the final lesson, thereby ensuring Chinese supremacy in Asia in this century. The recession that shut the Chinese exports shop is creating an unprecedented internal social unrest. In turn, the vice-like grip of the Communists' over the society stands severely threatened.

Unemployment is on the increase. The unofficial estimate stands at whopping 14 percent. Worldwide recession has put 30 million people out of jobs. Economic slowdown is depleting the foreign exchange reserves. Foreign investors are slowly shifting out. To create domestic market, the massive dole of loans to individuals is turning out to be a nightmare. There appears to be a flight of capital in billions of dollars in the shape of diamond and gold bought in Hong Kong and shipped out in end 2008. 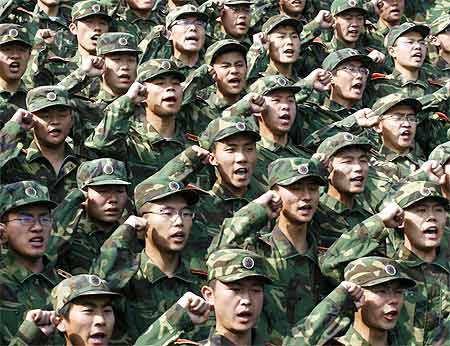 The fear of losing control over the Chinese masses is forcing the Communists to compulsorily install filtering software on new computers to crush dissent on the Internet, even though it is impossible to censor in entirety the flow of information as witnessed recently in Tibet, Xinjiang and Iran.

The external picture appears to be equally dismal. The unfolding Barack Obama strategy seems to be scoring goals for democracy and freedom without firing a single shot. While Geoge Bush unwittingly united and arrayed against himself Islamic countries and radical Islam worldwide, Obama has put radical Islam in disarray by lowering the intra societal temperature vis- -vis America and the Muslim world. He deftly hints at democracy in his talk without directly threatening any group or country and the youth picks it up from there as in Iran. With more and more Chinese citizens beginning to demand political freedom, the future of the communists is also becoming uncertain. The technological means available in 21st century to spread democracy is definitely not conducive for the totalitarian regime in Beijing.

India's democracy is an eyesore for China 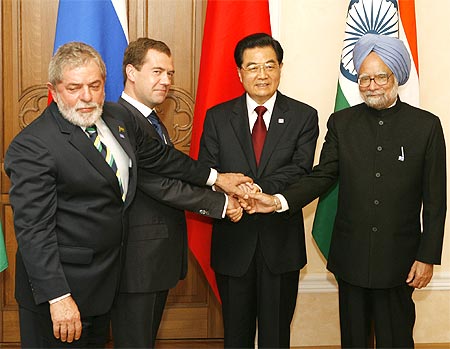 India's chaotic but successful democracy is an eyesore for the authoritarian regime in Beijing. Unlike India, China is handicapped as it lacks the soft power- an essential ingredient to spread influence. This further adds fuel to the fire.

In addition, the growing irrelevance of Pakistan, their right hand that operates against India on their behest, is increasing the Chinese nervousness. Obama's Af-Pak policy is primarily a policy that has intelligently set the thief to catch the thief.  The stated withdrawal from Iraq by Americans now allows them to concentrate its military surplus on the single front to successfully execute the mission. This surplus, in combination with other democratic forces, can enable the Americans to look deep in to resource rich Central Asia, besides containing China's expansionist ambitions.

Why India is an ideal target for the Chinese 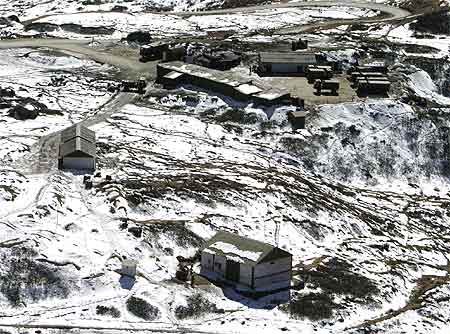 Image: A snow-covered army camp is seen after a snowfall at the India-China trade route at Nathu-La
Photographs: Rupak De Chowdhuri/Reuters

To offset this adverse scenario, while overtly pretending to side with the West, the Chinese covertly ordered their other proxy, North Korea, to test underground nuclear explosion and carry out trials of missiles that threaten Japan and South Korea.

The Chinese anxiety is understandable. Under Bush's declared policy of being 'a strategic competitor' alongside the 'axis of evil', they shared a large strategic maneuverability with others of similar hues. However, Obama policies wisely deny such a luxury by reclaiming more and more international strategic space ceded by the previous administration.

The Communists in China, therefore, need a military victory to unite the disillusioned citizenry behind them. This will assist to market a psychological perception that the 21st century belongs to China and to commemorate their deep belief in the superiority of the Chinese race. To divert attention from the brewing internal dissent is essential to retain the Communist Party's hold on power. In an autocratic system normally the only fodder to unite the citizenry is by raising their nationalistic feelings.

The easy method for Beijing to heighten the feeling of patriotism and thus national unity is to design a war with an adversary. They believe that this will help them to midwife the Chinese century too. That is the end game rooted in the firm belief of the Communists that Chinese race is far superior to Nazi Germany and is destined to 'Lord over the Earth'.

At present, there is no overall cost benefit ratio in integrating Taiwan by force with the mainland since under the new dispensation in Taipei, the island is 'behaving' itself. Also, the American presence around the region is too strong for comfort. There is also the factor of Japan to take into account.  Though Beijing is increasing its naval presence in South China Sea to coerce into submission those opposing its claim on the Sprately Islands, at this point of time in history it will be unwise for the recession-hit China to move against the Western interests, including Japan.

Therefore, the most attractive option is to attack a soft target like India and forcibly occupy its territory in the Northeast.

China is worried by India's alliance with the US 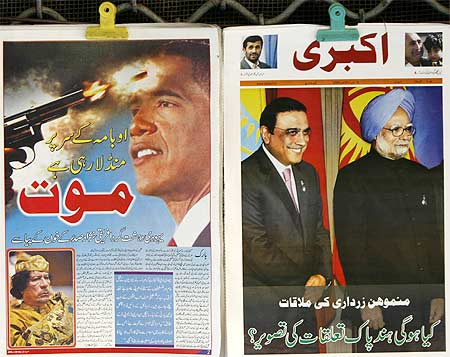 Image: Newspapers are displayed at a roadside shop in the old quarters of Delhi
Photographs: Adnan Abidi/Reuters

Ideally, the Chinese believe that the east-wind should prevail over the west-wind. However, despite their imperial calculations of the past, they lag behind the West, particularly America by many decades.

Hence, they want the east-wind to at least prevail over the other east-wind, i.e., India, to ensure their dominance over Asia. Beijing's cleverly raising the hackles on its fabricated dispute in Arunachal Pradesh to an alarming level is the preparatory groundwork for imposing such a conflict on India. A sinking Pakistan will team up with China to teach India 'the final lesson'.

The Chinese leadership wants to rally its population behind the Communist rule. As it is, Beijing is already rattled, with its proxy Pakistan, now literally embroiled in a civil war, losing its sheen against India. Above all, it is worried over the growing alliance of India with the United States and the West, because the alliance has the potential to create a technologically superior counterpoise.

Is India prepared for the Chinese threat? 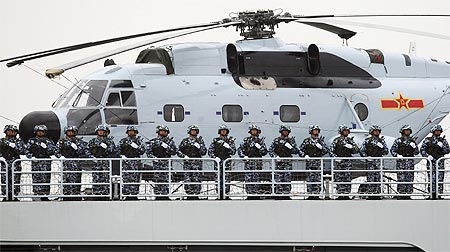 Image: Chinese Marines stand at attention on a warship while taking part in an international fleet review to celebrate the 60th anniversary of the founding of the People's Liberation Army Navy in Qingdao, Shandong province
Photographs: Guang Niu/Pool/Reuters

All these three concerns of Chinese Communists are best addressed by waging a war against pacifist India to achieve multiple strategic objectives. But India, otherwise the biggest challenge to the supremacy of China in Asia, is least prepared on ground to face the Chinese threat.

How will India face and respond vigorously to repulse the Chinese game plan? Will Indian leadership be able to take the heat of war? Have they laid the groundwork adequately to defend India? Is Indian military equipped to face the two-front wars by Beijing and Islamabad? Is the Indian civil administration geared to meet the internal security challenges that the external actors will sponsor simultaneously through their doctrine of unrestricted warfare?

The answers are an unequivocal 'no'. Pacifist India is not ready by a long shot either on the internal or the external front.

It is said that long time back, a king with an excellent military machine at his disposal could not stomach the violence involved in winning wars. So he renounced war in victory. This led to the rise of the pacifist philosophies. The state either refused to defend itself or neglected the instruments that could defend it.

Any 'extreme' is dangerous, as it tends to create imbalance in statecraft. We saw that in the unjust unilateral aggression in Iraq. It diminished the American aura and recessed the economy. China's despotic regime is another extreme, scared to permit political dissent. This will fuel an explosion worse than the Tiananmen Square. Despite use of disproportionate force and demographic invasion of Tibet, Beijing's hold remains tenuous. Pakistan's over-aggressive agenda in the name of jihad haunts it now to the point of fragmentation of the state.

How we must face the threat 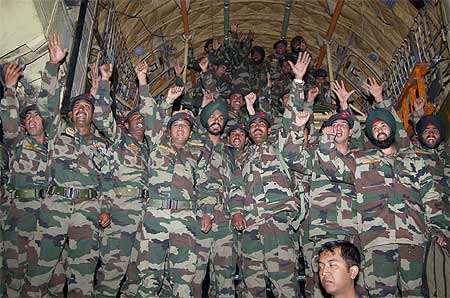 Image: Indian army personnel gesture after their return from the first-ever joint military exercise between India and China in December 2007
Photographs: Utpal Baruah/Reuters

Similarly, India's pacifism is the other extreme. More 26/11-like attacks will occur on a regular basis as it infects policymaking. Such extreme postures on either side invariably generate wars. Armed with an aggressive Wahabi philosophy, Pakistan, in cohort with China, wants to destabilise a pacifist India. India's instruments of state steeped in pacifism are unable to rise to its defence.

In the past 60 years, instead of offering good governance, the deep-rooted pacifism contributed to the civil administration ceding control of 40 per cent of the Union's territory to the Maoists and ten percent to the insurgents, effecting a shrinking influence internally, as well in the 'near abroad'.

India must rapidly shift out from its defeatist posture of pacifism to deter China. New Delhi's stance should modify, not to aggression, but to a firm assertion in statecraft. The state must also exclusively retain the capability of intervention by use of force internally as well as externally. If it permits the non-state actors to develop this capability in competition, then the state will whither away. On the contrary, the state machinery should ensure a fast-paced development in the Red Corridor even it if has to hold Maoists' hostage at gunpoint. The state's firm and just intervention will dissolve the Maoist movement.

Keeping in view the imminent threat posed by China, the quickest way to swing out of pacifism to state of assertion is by injecting military thinking in the civil administration to build the sinews. That will enormously increase the deliverables on ground -- from Lalgarh to Tawang.