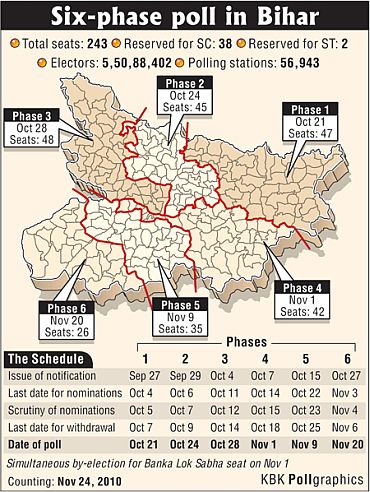 Bihar will go to polls in six phases spread over a month from October 21, the Election Commission announced on Monday.

Second phase on October 24: 45 seats will go to polls.

Fourth phase on November 1: 42 seats will go to polls

Fifth phase on November 9:  35 seats will go to polls

Sixth phase on November 20: 26 seats will go to polls

The counting of votes for the 243-member assembly will be held on November 24, Chief Election Commissioner S Y Quraishi told a press conference in New Delhi.

Polling will be held in 56,943 polling stations spread across the state in which over 5.50 crore electors are expected to exercise their franchise. The bypoll for the Banka Lok Sabha seat, which became vacant following the death of sitting MP Digvijay Singh, will be held on November 1.

All critical events will be video-graphed. District Election Officers will arrange sufficient number of video and digital cameras and camera teams for the purpose.

Digital cameras will also be deployed inside polling booths wherever needed.

The model code of conduct comes into effect immediately from now onwards.

All the provisions of the model code will apply to the whole of Bihar and will be applicable to all candidates, political parties, the state government of Bihar and the Union government from Monday itself.

Based on the assessment of the ground situation, Central Police Forces and State Armed Police drawn from other states will be deployed during the ensuing general elections.

The EC will deploy general observers in adequate number to ensure smooth conduct of forthcoming elections in the state. The observers will be asked to keep a close watch on every stage of the electoral process to ensure free and fair elections.

Their names, addresses within the district/constituency and their telephone numbers will be publicized in local newspapers so that the general public can quickly approach them for any grievance redressal. The observers will be given a detailed briefing by the commission before their deployment.

Micro-observers will observe the proceedings on the poll day right from the mock poll to the completion of poll and the process of sealing of EVMs and other documents to ensure that the polling parties and the polling agents comply with all instructions of the commission.

The term of the 243-member Assembly will end on November 27. This will be the first election after Quraishi took over as the Chief Election Commissioner on July 30. The election is expected to be a triangular affair with the ruling Janata Dal-United-Bharatiya Janata Party continuing their poll alliance and Lalu Prasad's Rashtriya Janata Dal and Ram Vilas Paswan's Lok Janshakti Party joining hands to oust it from power.

The Congress has announced it would go it alone in Bihar, unlike in the past when it played a second fiddle to the RJD.

The RJD and LJP overcame last-minute hiccups and clinched an alliance and decided to contest 168 and 75 seats respectively.