Is Michelle the reason for Obama's Amritsar visit? 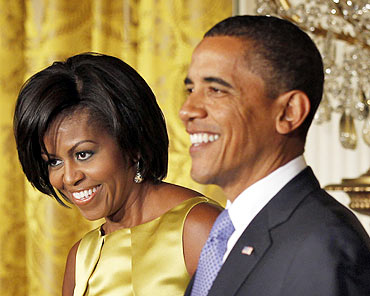 During his November visit to India, Barack Obama will be paying a visit to Amritsar's Golden Temple, a first for a United States president. This stopover may be unusual for a head of state and has many thinking: Is this visit being made especially for First Lady Michelle Obama, who will be accompanying her husband to India? Maybe, for not many know of the Obamas' Punjab connection.

According to a report in the Chicago Tribune, Michelle Obama's uncle Nomenee Robinson served in Punjab in 1961 as a volunteer of Peace Corps, an organisation started by former US President John F Kennedy to improve health, education and economic prospects of some economically backward and developing nations.

A young architect and city planner working in Chicago's water department, Robinson assisted in building projects in Punjab. He had to use bricks made of sand and straw and just a dab of cement to build trekking huts, said the report.

Life was not easy, but his enthusiasm never flagged and seems like he has passed on some of it to his beloved niece Michelle.

After spending November 6 in Mumbai, Obama will spend the next day in Amritsar.

Sikh Americans are ecstatic that Obama will visit the Golden Temple. Avatar Singh, chief of the Shiromani Gurdwara Parbandhak Committee that is responsible for Sikh places of worship in Punjab, Haryana and Himachal Pradesh, will welcome Obama. Other senior leaders, led by Punjab Chief Minister Parkash Singh Badal, are also expected to receive the American President and the First Lady.

Sources said that in the few hours the Obamas will be in Amritsar, they will also visit an organic farm. The first lady is very interested in the subject, and has a miniature organic farm on the White House's South Lawn.

"It's really a dream come true moment," said Potomac, Maryland-based dentist Dr Rajwant Singh, chairman, Sikh Council on Religion and Education and executive director, Guru Gobind Singh Foundation. "This is absolutely a joyous moment for Sikhs not just in America, but all over the world," added Singh, was in the forefront of urging Obama to visit the Golden Temple. "I have been receiving scores of e-mails and calls from not only all across America but from also people in Punjab and Delhi and everywhere  even from Australia and the Middle East!"

He said it all had begun when "The President mentioned to Prime Minister Manmohan Singh at the state dinner in November about the Guru Nanak birthday celebrations the White House had hosted. This was such a complete surprise and such a wonderful and great gesture."

It was then, Singh said, "That's when I thought that this could work (urging Obama to visit the Golden Temple). That if I just plug this idea and somehow keep pushing this, it might work. And by god's grace it did."

Singh had started to work on it with Paul Montero, White House associate director for public engagement. Montero's portfolio includes reaching out to ethnic minorities and he is a regular feature at Sikh American events. He helped organise the Guru Nanak birth anniversary celebration at the White House.

In early July, Singh continued, he had written to the White House that if the President could visit the Golden Temple, it would "be a wonderful gesture since it's a symbol of interfaith understanding." He had pointed out that "the foundation stone of the temple was laid by a Muslim saint and the temple itself was constructed by Hindus and Sikhs and visited by people of all faiths from all over the world. I also mentioned that Punjab shares 370 miles of border with Pakistan and it will be a powerful message by the President to South Asia if he visits the temple."

If Obama visits the temple, Singh had added, "Americans will come to know about Sikhs and what Sikhism is all about. This will hopefully help to remove some of the misunderstanding and misperceptions about Sikhs in America and many of the difficulties Sikhs have faced and continue to face due to everything from racial profiling to mistaken identity and harassment at airports and other security barriers."

Montero had begun pushing for such a visit by getting this suggestion through to the powers that be in the National Security Council. The NSC then conferred with the State Department. At Foggy Bottom, senior officials familiar with Secretary of State Hillary Clinton's close relationship with the Sikh community had endorsed it. Consequently, an advance US security team visited Amritsar.

Interestingly, it was at a fundraiser on her behalf at Singh's home several years ago for her re-election for the US Senate, where Clinton had made those famous remarks that the Sikh community loves her so much that she could be easily elected as the 'Democrat from Punjab.'

Administration sources acknowledged that there was "a strategic component" to the decision to visit the Golden Temple.

The President, the sources said, "has such great respect and admiration for Prime Minister Singh. This is shared by everyone in the administration from Secretary Clinton to Vice President Joe Biden, who all really, really look up to him as a man of immense wisdom and counsel."

Thus, the sources implied, Obama creating history as the first American President to visit the Golden Temple will be a major boost to the Indian prime minister in the eyes of his own community, not all of whom have looked upon him favorably.

"It has definitely played a role in this decision," one source said. "No doubt about it."

Exclusive! What Obama wants out of India