'The Maoists want to destroy the State' 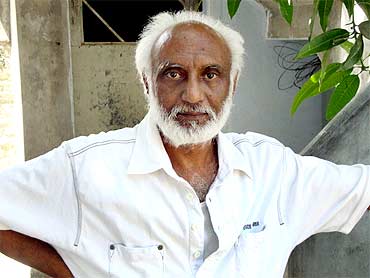 With the debate on Maoism reaching a fever pitch and grabbing the nation's attention, more and more stories are emerging from the so-called liberated zones. Punjabi writer Satnam spent two months with the Maoists in the 1990s and wrote a book about that time in 16 days flat.

A decade after it was published in Punjabi, a much-needed English translation has just come out. Satnam, who writes about "international issues for revolutionary papers" and is involved in children's education, speaks about the tribals and their relations with the Maoists on the one hand and the State on the other hand in an interview with rediff.com's Krishnakumar Padmanabhan.

Though there have been inequalities and injustices like any other part of India, Punjab has never been known for its Left politics. How were you drawn to it?

Left politics might not have been always very visible in Punjab, but it has always been strong. It was there even before the pre-Independence era. Then, the Sikh movement was there. Guru Gobind Singh led the struggle against British rule.

Also, where there is Bhagat Singh, can the revolutionary spirit be far behind? So, there has been a long legacy of revolutionary movement in Punjab. Though it is not necessarily a question of a Left movement.

Your book, published 10 years ago, has been translated only now. How did it come about?

I don't know how it happened. Somebody from Penguin read the book and got hold of it. Then they made arrangements to translate it. Before that it was translated into three languages: Hindi, Bangla and Marathi.

Why did you want to go and spend time in Bastar?

I was always interested in tribal people for a long time. Usually, what I had heard was about the people in the Northeast. That they still live in jungles and are removed from civilisation. But I came to know about the Bastar region only in the mid-1990s. I was very interested in knowing more about these people in the heart of India.

Around the same time, the Maoists called me. I have been writing in the revolutionary papers. I am a political commentator on international issues. After seeing that they sent a message asking 'Would you like to go there?' I was the happiest person.

Was your objective spending time with the Maoists or the tribals?

I wanted to know about the movement and the people too. It was a real eye-opener for me. To see that people lived like that. I thought what was written about in the Ramayan as the Dandak forest was in front of me. It is perhaps the same area.

And it was like the area was still in the same period. The people did not wear clothes, I was reminded of the Red Indians and the aborigines. It is such an old civilisation. I felt what happned with the aborigines and the Red Indians is going to happen to these people also. But thanks to the Maoist movement, they have taken up arms and are resisting the State's onslaught.

What is this onslaught?

Now it is almost clear to everyone that the Indian government wants to take control of that area and give the control over all of central India to multinationals and corporations. Because that area's natural resources are equal to that of the Middle East. There is no doubt about this.

MoUs worth lakhs of crores of rupees have been signed with various industrial houses. They say it is for the development of the people. But when you see the people there... Go to Kaladela. You just have to go three kilometres out of the town, you will find people living half naked with no facilities. And this is supposed to be their biggest project.

There is no development of the people at all. You won't even find a hand pump in most of the villages. Take the Bhilai steel plant, the so-called temple of modern India, like Nehru said. You go four kilometres from there in any direction, and you will find a similar situation.

It is just rubbish... Talk of developing these areas. In 1947 people had so many dreams that they will be the master of their own destiny and all. But what is the situation now: Peasants are committing suicide, the young don't see a future.

What is the government is doing? Even things like education and health have been privatised. They can't even provide water for people. If you want clean water, people have to pay 15 rupees for that.

The State has done nothing in the last six decades, it won't do it in the coming decades too.

In your interactions, were you able to find out what the tribal people want for their children? Their future? You quote a person saying that no one lives past 50.

Have they figured such things out? Do they know what they need to set address these issues?

They have been using their own traditional medicines. In the rest of Madhya Pradesh and Kerala, the tribal people use their natural herbs well. But not here. The backwardness is too much and the the State hasn't come in. When they did come in, it was for exploitation.

They want that they should not be destroyed, expelled from their land. They want to be the owners of their own land, and now they want the resources. They did not know earlier about the riches they have. Now they know, thanks to the Maoists. That if they dig three or four metres into the earth, you will find enormous mineral resources. They say we won't let anybody do it.

If the State wants to access those resources, what should be done?

The State is not pro-people. They only care about the profit of the capitalists, they have to tell the world that they are growing at 10 per cent.

If the State becomes pro-people, is there a way?

This State can't. If there is a State that is pro-people, which is created by the people, that State can do wonders. What you can't do there? These tribals would be glad to work with such a State. And more than anything, people are the most precious assets of a country. Our State doesn't bother.

How are tribals attracted to the Maoists?

Exploitation of the timber contractors, the police. They are very simple people, the police and the contractors lorded over them. The Maoists organised the people and took up resistance.

Were you able to observe any shortcoming of the Maoists?

Every movement has drawbacks. Nobody can escape from that. The point is they have an approach. When you tell them that something will alienate you from the people, they mend their ways.

What particular problems did you spot?

That I have talked to them. I don't think I should go public about it.

The biggest thing is that when somebody is trapped in a pincer, they have very little resources to develop the area. It is not possible for them. It is a long drawn struggle. It has taken two decades. It might take more. They want to revolutionise India.

But surely there must be shortcomings among the Maoists.

What I found was that somewhere they are not very much integrated with the people at some places. I visited a vast number of areas. I told them the initiatives among the people was lacking.

But thanks to Salwa Judum, it has done wonders, the little mass support Maoists had there has multiplied by many times. It has come out in an unbridled form. When I was there the second time in 2005, I could see the change.

There have been accounts that the tribals don't like the Maoists any more than the State, but accept them because they have no choice. Was this evident?

The point is, if the police goes, the people flee to the jungles. But when the Maoists go there, they embrace them.

Most Maoist leaders are Telugu speaking. Most of the people under them are local tribals. Is there any resentment?

As an ideological question, this is a no-brainer. Tell me, are the CRPF (Central Reserve Police Force), administration and others... do they come from the tribal land?

The local administration is...

No. The commissioner is from outside. The force is from outside and mostly non-tribal. But on the other hand, the Maoists claim they are internationalists.

But what do the tribals think of this Telugu-speaking upper echelon?

The southern tip of Bastar is mixed. It is the adjoining belt with Andhra, North Telangana. The language is mixed. It is Telugu-ised Gondi. In north Bastar, the Gondi is different. In the south, it is very much similar to Telugu. They share a common heritage and there is no resentment.

You speak about human sacrifice and a couple of other things that the Maoists have changed among the tribals. On the other hand, the State also wants to change them in a particular way.

Don't you think there is a problem here with both sides doing what they think is right for the tribals?

They have integrated themselves with the people and convinced them not to do it. Where does the State do this? The State destroys and uproots them from their homes of many centuries. They don't have any concern for the tribal people.

The Maoists are concerned and are changing them by convincing them.

Revolution is the target.

But aren't they then using the tribal people as a means to their end?

It is not a question of using anybody against anybody. In fact, it is the State that is using the people. They ask people to join their forces. Again they use this force against the people.

What the State does with the forces and people is clear everywhere -- the Northeast, Jammu and Kashmir, Punjab, Bastar, Andhra...

Finally, is it okay to say the Maoists are using people like you as PR machinery? Taking you in, showing only what they want you to see?

No. We wanted to go. And their side needs to be told. If something happens in Delhi or your Bombay, it comes on the front page. When things happen there, nobody writes about them. Till (novelist-social activist) Arundhati (Roy) went in, did nothing come out about the recent operations?

So this is not a question of a PR exercise. They need propaganda about their work. They want to tell the world what work they have done in these areas, and what the State paints them as.