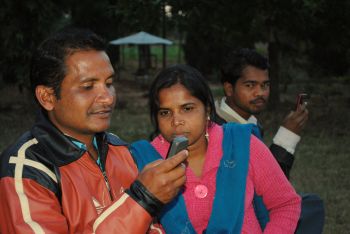 In the tribal lands of Chhattisgarh, everybody is a journalist.

You might spot every other tribal here hooked to a cellphone, as they are either busy reporting their daily quota of events or keeping abreast with the happenings around. After all, this new-age reporting is as simple as calling up a friend.

The tribals of Chhattisgarh are the first users of a latest newscasting system on cellphone called CGnet Swara, a combined effort of a fellow of the International Centre for Journalists, of a fellow of Microsoft Research and a researcher of the Massachusetts Institute of Technology's computer science department.

They have the liberty to report their piece of news in any language via a phone call to the main centre, where the message is moderated and edited before being played on the phone. Even a tribal language like Gondi, which does not have a script and is not used even by the All India Radio, has a vast audience on CGnet.

Sound files recorded from phone-ins are stored on a server and are then moderated.

The founders of CGnet have been carrying out experiments in alternate media, and came upon this idea over five years ago, at an e-panchayat.

After discovering that people's news got less than 2 percent space in mainstream media through a media survey, the founders experimented by starting a people's website www.cgnet.in, where anybody is allowed to provide content.

As the news website gained popularity, the team extended the newscast idea to cellphones. CGnet Swara is the latest addition to the growing innovations in media and is clearly one of the most promising.

Shubhranshu Choudhary, a former BBC journalist who co-founded CGnet, says, "A discussion forum like on e-mail has limited reach in places like central tribal India. So we decided to go for mobile phones, which will include many more voices from the ground to enrich our discussions."

The raging interest shown by the tribals has surprised even the CGnet's creative team. But that is no surprise.

The tribals feel powerful with this low-cost media, where they are the newsmakers. Mobiles phones are cheaper than other mediums; they do not require literacy and require much less investment than a computer system.

The new medium has given the illierate tribals a voice to express their experiences and opinions.

Also, the liberty to record news in any language has made the medium very popular.

A moderator, who understands the language, translates and releases the messages via a computer back to the server -- just like an e-discussion forum.

Bhan Sahu, a tribal woman from a Chhattisgarh village, is clearly more popular on this network than a BBC-coached voice like Choudhary's.

There is a flip side too. Founders of the technology fear misuse of the free media, though presently moderators scrutinise and verify every piece of news passed on to them, and if necessary also add warnings.

The technology also maintains the anonymity of the caller, who has the option to declare his phone number and identity if he or she wants.

Though in its fledgling days, the CGnet could create waves among the illiterate population of India.

"We are excited about using voice as a general platform for sharing local information over mobile phones.  Many (more) new applications are possible," says Bill Thies of Microsoft Research.

In spite that the project's popularity has been restrained due to lack of funds for publicity, the phone-ins are undeniably more than expected, say the founders.