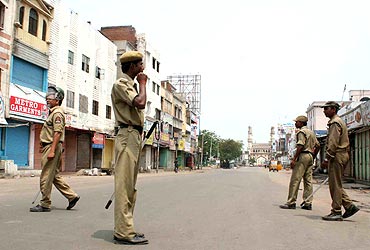 An uneasy peace prevailed in the curfew bound old city area of Hyderabad with stray incidents of violence overnight in Aliabad and Sultanshahi localities of the city.

One police constable was injured on Monday night when some miscreants attacked him with sharp weapons. The police had to use force to disperse some people who had gathered in the Gulzar House area.

The Madina circle and Charminar localities wore a deserted look with the police and paramilitary forces strictly enforcing the curfew and not allowing anybody to move about. Barricades were set up at many places to keep the people of other areas of the city away from Hyderabad's curfew-bound south zone.

Only the armed policemen and Rapid Action Force personnel along with news channel crews and journalists were seen moving on the roads on Tuesday. It is first time in two decades that Hyderabad has witnessed such a curfew.

Hyderabad city police commissioner A K Khan, who spent the night, patrolling the old city, said that situation was now by and large peaceful and under control. "Since the curfew was imposed at 1900 hrs on Monday evening, the situation has been under control. We imposed the curfew keeping in view the incidents since Saturday and on the basis of some information we had," he said.

Khan said that if Tuesday passed off peacefully and there is no further trouble, the police would consider relaxing in curfew in a phased manner.

Khan said that 130 people were arrested and they were being questioned. "Some of them have been arrested red handed while indulging in violence and some others were picked up on the basis of information about their involvement", he said.

The SSC examinations were cancelled for the students living in the curfew bound areas of the city. The government announced that a re-examination will be conducted later.

Meanwhile the violence in old city of Hyderabad rocked the state assembly today and the proceedings were stalled by the opposition demanding a discussion on the situation forcing the Speaker to adjourn the House for some time.

Later the Chief Minister K Rosaiah urged all the members of the House to pass a unanimous resolution appealing to the people for peace and calm. "It will help in restoing the confidence of the people.  These incidents are not good for the image and the prestige of Hyderabad city", he said.

Meanwhile a massive procession was taken out in Kothi area of Hyderabad on the occasion of Hanuman Jayanti on Tuesday. The procession attended by thousands of people including Bharatiya Janata Party leaders, was taken out under tight security. Similar processions were also allowed in other areas of Hyderabad, where the curfew was not imposed. Apart from the police, RAF personnel were also moving along with the procession to prevent any untoward incident.

Image: Police enforce the curfew in the old city area of Hyderabad on Tuesday.