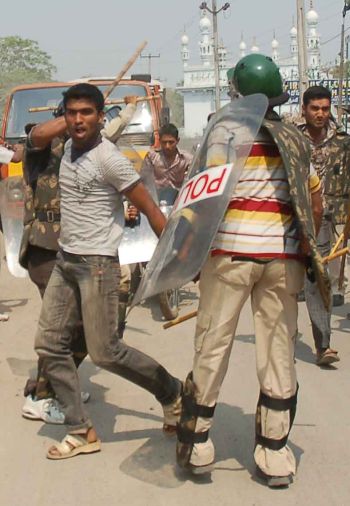 One person was killed and two injured in fresh incidents of communal violence in Hyderabad on Monday following which curfew was clamped in the old city area.

A thirty-year old man died at the Osmania hospital after he was stabbed by miscreants at Shah Ali Banda earlier in the day.

Police sources said one person was stabbed while another sustained injuries in the Shalibanda area. A man was also injured when a group of vandals attacked a vehicle at Khilwat Chowrasta.

The state government imposed curfew in the old city area of Hyderabad from 7 pm after fresh incidents of violence
erupted in Moghalpura, Shalibanda, Charminar, Aliabad and Lal
Darwaja localities.

In view of the worsening law and order situation, a curfew has been clamped on all police station limits of the Old City of Hyderabad.

Hyderabad city police commissioner A K Khan said the curfew was on from 7pm.

Fresh incidents of violence rocked the old city of Hyderabad on Monday and groups from two communities indulged in heavy stone pelting and attacked shops and establishments.

The fresh incidents were reported on Monday afternoon from Lal Darwaza and Syed Ali Chaboota areas. The police resorted to lathicharge and used tear gas shells to disperse the mobs. The violence resumed despite heavy deployment of the police and the paramilitary forces.

Home Minister Sabita Reddy said that the number of persons arrested has gone up to 86 and strict orders have been issued to the police to deal with the mischief mongers. More than 60 people have injured in the clashes and stone pelting in the old city since Saturday night when the trouble began.

Reddy also held a meeting with the city MLAs and top police officials to review the situation. But Bharatiya Janata Party MLA and state BJP president G Kishan Reddy walked out of the meeting when the MIM legislators blamed right wing hindu groups for the communal violence. The decision of the Director General of Police Girish Kumar not to allow the BJP leaders to visit the affected areas has also left the BJP upset.

As most students were not able to appear for their annual examinations, the minister for secondary education, Manikya Vara Prasad Rao announced that all such students would be given another opportunity.

The Chief Minister K Rosaiah and the leader of the opposition N Chandrababu Naidu made an appeal to the people to maintain peace.

With situation in the old city area of Hyderabad remaining tense after communal clashes, the Andhra Pradesh government said on Monday that additional forces, including nearly 1000 paramilitary personnel despatched by the Centre, were being deployed to restore peace in the trouble-hit areas.

The situation continued to be tense following the clashes that erupted on Sunday evening, Chief Minister K Rosaiah told the state assembly."We are constantly monitoring and reviewing the situation and also talking to the Centre on this. The Centre has sent 10 companies (about 1000 personnel) of paramilitary forces on my request to Union Home Minister P Chidambaram," he said.

At least 36 people were injured in stone-pelting and 70 others taken into custody after the clashes between two communities in the old city. Prohibitory orders were clamped in 18 police stations of south zone and four police stations of Goshamahal division of west zone of the city.

Rosaiah said the government was taking every step to ensure peace and appealed to all sections to observe restraint. "All India Congress Committee president Sonia Gandhi called me over phone on Monday and enquired about the situation. She has also appealed for peace," the CM added.

Home Minister P Sabita Reddy visited some of the affected areas on Monday while Director General of Police R R Girish Kumar was in the affected areas till late in the night. Earlier, the opposition parties pressed for a discussion in the assembly through an adjournment motion on the issue but Speaker N Kiran Kumar Reddy disallowed it.

Agitated members of the Majlis Ittehadul-e-Muslimeen, however, remained insistent on a discussion. MIM floor leader Akbaruddin Owaisi said the situation in old city was so volatile that students were unable to venture out to go to the examination centres.He wanted the government to postpone the ongoing exams. The police force posted in old city was inadequate, Owaisi said. Education Minister D Manikya Varaprasada Rao assured Owaisi that the government would take an appropriate decision on the examinations after obtaining a report on the situation.

The home minister, who drove to the assembly after visiting the old city, said the situation was gradually returning to normal. Leader of Opposition N Chandrababu Naidu appealed to people to observe restraint and ensure that things did not flare up.The MIM MLAs created a din and sought to block the proceedings, forcing the speaker to adjourn the house for 15 minutes.

Meanwhile, situation in several clash-hit areas like Afzalgunj, Gawliguda and Siddhiambar Bazar is limping back to normal. "No fresh incidents of violence or stone-pelting were reported since last night. The situation is peaceful in these localities so far and we are taking every step to maintain it," South Zone DCP Madhusudhan Reddy told PTI.

Prohibitory orders under Section 144 CrPc have been imposed in entire South Zone since last evening to prevent further flare-up, he said. Over a dozen areas in the old city witnessed heavy stone pelting between groups of two communities and attacks on houses, shops, places of worship and vehicles since Saturday night.

The trouble began in Musarambagh area under Hussaini Alam police station limits when members of a community wanted to erect religious flags near a place of worship which was objected to by the other community, leading to clashes which escalatedon Sunday and spread to other parts of the city.