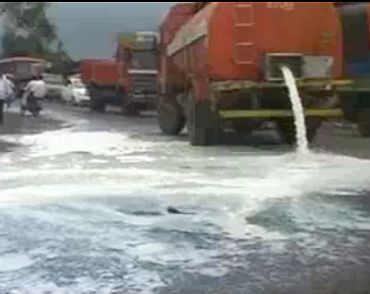 To protest the central government's decision to import milk powder and other dairy products, Shiv Sena activists spilled thousands of litres of milk on the Satara-Pune highway.

The activists stopped a milk tanker on the highway and spilled the milk all over the road. The import of dairy products will hurt the interests of the local dairy farmers, they claimed.

In a similar protest last week, Sena activists had stopped five tankers and wasted over 50,000 litres of milk in Satara.

Shetkari Sanghatana leader Shankar Godse on Thursday said that his organisation had decided to take the step along with the Shiv Sena as milk prices would reduce by Rs 5 per litre following the Centre's decision to import 30,000 tonnes of milk powder.

"The government has waived import duty on these items which will make them cheaper than local products. These goods are to land in Mumbai on August 18. We have decided not to allow unloading of these goods," he said.

The protest has evoked a strong reaction from columnist and author Shobhaa De who said, "Shiv Sainiks have forgotten meaning of 'milk of human kindness'. What a tragic/criminal waste of precious milk. Ridiculous protest. The party should be made to pay up."

Image: A TV grab of the incident