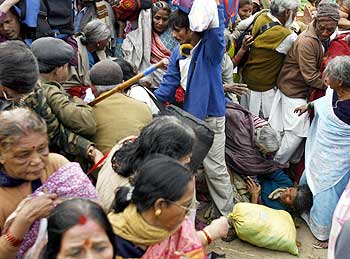 At least seven pilgrims were killed and nine injured, four of them seriously, when a stampede broke out at the Gangasagar mela in South 24 Parganas district of West Bengal early on Thursday.

Around four lakh pilgrims had gathered to take a holy dip at the confluence of Ganga and the Bay of Bengal in Gangasagar islands on the auspicious occasion of 'Makar Sankranti' when the stampede took place.

The dead included six women and a child. Out of the nine injured, admitted to Kakdweep Hospital, the condition of four is stated to be serious.

Image: Pilgrims struggle to enter a temple premise at Gangasagar Islands, on Thursday