Russia, US to speed up talks on new nuke pact 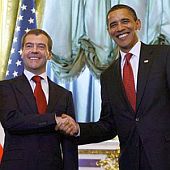 Russian President Dmitry Medvedev and his US counterpart Barack Obama are keen on the earliest signing of a key nuclear arms control pact after missing the December 2009 deadline, according to the Kremlin.

"The Russian and US presidents will direct their respective delegations to speed up talks on a new arms control agreement," a Kremlin release issued late on Wednesday said after telephonic conversation of the leaders of world's largest nuclear stockpiles holders.

The new treaty's outline, as agreed on by the Russian and US leaders, includes slashing nuclear arsenals to 1,500-1,675 warheads and delivery vehicles to 500-1,000.

According to Foreign Minister Sergei Lavrov, who on Tuesday had telephonic conversation with his counterpart Hillary Clinton, said the draft of the treaty is nearly ready and could be struck in the next two or three weeks.

However, Moscow, which views US plans to deploy elements of its missile defence system in Europe as a direct threat to its security, has said further cuts in offensive nuclear weapons will not be practical unless the sides put limits on nuclear defence projects, which could create an atmosphere of distrust.

Washington says, the missile shield is needed to guard against potential Iranian strikes and would pose no threat to Russia, but in a clear move to ease Moscow's concerns, Obama last year scrapped plans to deploy interceptor missiles in Poland and a radar system in the Czech Republic.

Earlier this month, however, Romania and Bulgaria said they were in talks with Obama's administration on deploying elements of the US missile shield on their territories from 2015.

Foreign Affairs Committee Chairman of the Russian Duma (Lower House) Konstantin Kosachev said it would be difficult to ratify the new arms control pact without linking it to the anti-ballistic missiles (ABM) plans of the US.

According to Alexi Arbatov of the Institutive of International Economic Relations the US is unwilling to discuss Pak nuke missiles, posing "direct threat" to Russia and its Central Asian allies unlike the "hypothetical threat" of North Korean and Iranian missiles on its European allies.

Vinay Shukla in Moscow
Source: PTI© Copyright 2021 PTI. All rights reserved. Republication or redistribution of PTI content, including by framing or similar means, is expressly prohibited without the prior written consent.
Related News: US, Kremlin, Barack Obama, Russia, Moscow
SHARE THIS STORY
Print this article