CBI on Quattrocchi's trail, Rs 40 lakh down the drain 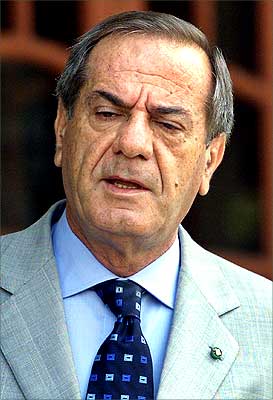 A single attempt by the Central Bureau of Investigation to get Bofors kickback case accused Ottavio Quattrocchi extradited from Argentina in 2007 made a dent of over Rs 40 lakh to the exchequer.

The agency sent two of its senior officials twice to get the elusive Italian businessman from the Latin American country in 2007 but failed in its attempt as it could not produce proper legal documents before the court there.

The CBI, which faced flak for its unsuccessful attempts to bring Quattrocchi to India for standing trial in the case, spent Rs 40.14 lakh on the trips to Argentina on two officials which includes expenses on their visits, fees of the local counsel, translation charges, transportation and expenditure on boarding and lodging, an RTI reply from the agency says.

RTI applicant Abhishek Shukla sought the details of all the foreign visits made by CBI teams during the probe of Bofors kickback case along with the expenditure but the agency did not give any details other than the Argentina visit.

"During the last five years (since January 2005), a team of two CBI officers had made two trips to Argentina in the year 2007 for 25 and eight days respectively in connection with the extradition of Ottavio Quattrocchi from Argentina in Bofors case," the agency said in its reply.