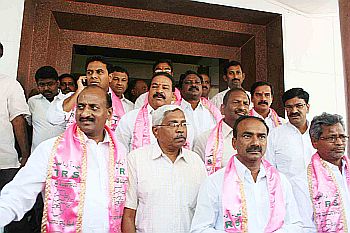 Telangana Rashtra Samiti has postponed submission of resignations by its MLAs to the assembly speaker N Kirankumar Reddy by a few hours on the appeal of Telangana Joint Action Committee convenor Prof Kodandaram.

The decision was taken at a meeting Kodandaram had with the TRS legislators at the TRS Legislature party office where the MLAs had gathered to meet the speaker.

Kodandaram told the media that he requested TRS to postpone the resignation till the meeting of TJAC later this evening. "I made the request so that all of us could sit together and take a collective decision and act collectively".

He exuded confidence that both the Telugu Desam and the Congress party leaders will attend the meeting and a unanimous decision will be taken on the next step.

When asked to react to the statement of senior Congress leader and former home minister K Jana Reddy welcoming the terms of reference of Srikrishna committee, Prof Kodandaram said that the people of Telangana have rejected it and the stand of the political leaders should also reflect it. "Those who are welcoming the decision should explain why they are doing so", he said.

TRS floor leader E Rajinder and other leaders made it clear that they will go ahead with the resignations even if the other parties do not do so. "The purpose of the resignations is to convey to the Central government the intensity of the feelings of the people of Telangana against these anti Telangana terms of reference," T Harish Rao said.

TRS legislators have sought another appointment with the speaker of tomorrow to submit the resignations.

Earlier, normal life was hit in the Telangana region on Saturday on the bandh call given by the Students Joint Action Committee in protest against the terms of reference of Justice Srikrishna committee, all the major political parties were busy weighing options before them.

Shops and business establishments remained closed in some parts of Hyderabad and other Telangana districts while the State Road Transport Corporation has withdrawn its bus services from most of the Telangana areas as a precaution. The government offices and the educational institutions were any way closed on account of Second Saturday. The strike call has the support of all party Telangana Joint Action Committee.

Elaborate security arrangements were made in Hyderabad and neighbouring Cyberabad city to prevent any untoward incident. Hyderabad police commissioner A K Khan said that prohibitory orders under section 144 were enforced in the city, and warned that miscreants will be dealt with sternly.

The Telangna leaders of Congress and Telugu Desam were holding their separate meetings today to chalk out their future course of action. TJAC is also scheduled to meet later this evening to finalize joint plan of action.

But in an indication of division in the ranks of Telangana leaders of Congress party, only eight legislators, including R Damodar Reddy, have decided to tender their resignations while others have developed cold feet.

Former home minister and senior legislator K Jana Reddy has come out in favour of terms of reference of the Srikrishna committee describing it as a step forward. He was angry over the JAC leaders laying a siege of him in Naglonda and said that he was more interested than them in securing Telangana state.

Meanwhile, in a bandh related incident of violence, some miscreants set on fire three RTC buses in Narsampet in Warangal district early this morning. In Bhoopalapally,  attempt by another group to set on fire the office of the Congress party was foiled.

In Nizamabad, the police arrested some demonstrators who tried to stop the buses. However in Nalgonda, protestors stopped the traffic on the National High No 7.

There have been many incidents of people expressing their anger against the terms of reference of Srikrishna panel. In Karimnagar district, a group pelted stones on the car of higher education minister D Sridhar Rao last evening and demanded his resignation. In Warangal senior Telugu Desam leader E Dayakar Rao also faced a similar protest.

In Osmania University campus in Hyderabad, tension prevailed as students gathered to stage a protest. Heavy police contingent was keeping an eye on the situation.