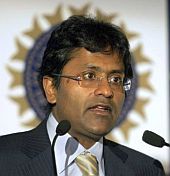 The ongoing Kochi IPL controversy will be discussed in Parliament on Friday. Minister of State for External Affairs Shashi Tharoor is expected to make a personal statement, as sought by the party leadership, and offer his clarification on his role in the Kochi IPL bid.

Sources say that much against the odds, Tharoor appears to have been given a reprieve by the party leadership after he met Congress president Sonia Gandhi to offer his personal explanation of the cricket developments. Before his meeting with Gandhi, Tharoor had two rounds of meetings with Pranab Mukherjee and AK Antony and one sitting on Wednesday night "to come clean on the issue and give the leadership all the facts pertaining to the case".

It is learnt that Prime Minister Manmohan Singh also asked Pranab Mukherjee to meet Tharoor and look into the issue and satisfy himself on the facts. Mukherjee as the Union finance minister has gone one step forward. Income tax officials have been searching IPL office premises in Mumbai to collect documents related to the ownership, holding patterns and financial controls of the various IPL teams, including the Kochi franchise that set off the entire frenzy and ugly exchange of charges and counter charges.

Even as there is huge scepticism in both cricketing, media and political circles as to whether the government is in a position to really take on the powerful cricketing establishment with big names involved from amongst politicians as well as a large number of influential business houses controlling the IPL teams, there is an attempt by a substantial section of the IPL governing body to "clip" IPL boss Lalit Modi's wings and put correctives in place before public opinion completely ruins their credibility.

A number of IPL board members would be in Dharmsala on Friday for the inauguration of the stadium there where an informal board meeting is likely to take place to discuss the issue on what are the options before the board vis a vis Modi before the actual board meeting takes place sometime on April 23 or 24.

Sources say that there are serious reservations over the style of functioning of Lalit Modi who appears to have become "more and more high handed and autocratic" with each passing day and one option being considered is to appoint a full time paid professional IPL commissioner to run the league with Modi being made the chairman with much less powers.

One board member described Modi as a 'law unto himself' and stated that 'Modi had a lot of explaining to do when the board finally meets'.

Sources said that on the face of it there appears to be much truth in the allegations that there were attempts to arm twist the Kochi team financiers to give up their bid in favour of some others like the Adanis and this was not acceptable to the board members.

Union ministers Sharad Pawar and Praful Patel are also being mentioned in this context.

The second point of objection is how and why the Internet rights of IPL, which went in open bidding, were sold to the son-in-law of Lalit Modi without the board being taken into confidence on the issue. This they say is a serious issue, which needs to be probed and looked into.

Board members do not give much credence to the other two charges that Modi's relatives are controlling the Rajasthan and Punjab teams since his brother-in-law Chellaram is a much bigger businessman than Modi himself and that his step son-in-law Dabur whose brother has financial stakes in Punjab has been virtually estranged from the Modi family.

BCCI President Shashank Manohar is said to be close to Pawar, but sources say he is an upright man who is of the view that since the consortium controlling the Kochi team won the bid in a fair and square manner there should be no attempts at arm twisting and trying to change the verdict. But sources say that the Kochi team members have themselves told some IPL board members that Shashi Tharoor was paid equity by the consortium after he helped them in meeting a large number of powerful people and offered them protection
against those trying to bring them down.

In this context, another name is also likely to be made public soon, of a former cricket captain who is also a powerful player of the high stake game. He was also given equity.

At the moment there is a head count going on amongst the IPL board members on how many are with Modi and how many against. For the moment the dice is loaded against Lalit Modi. The board members comprise Shashank Manohar, Lalit Modi, Arun Jaitley, Rajiv Shukla, N.Srinivasan, Niranjan Shah, Farooq Abdullah, Chirayu Amin, I S Bindra, Tiger Pataudi, Ravi Shastri and Sunil Gavaskar.

An IPL board member said that while the IPL board is itself looking at how to put right some of the things wrong with the Premier League with the BCCI and the board itself willing to take on Modi, it also expects that the government should take correctives as far as Tharoor is concerned since it is a governance issue when a minister takes money for sifarish (recommendation).

Even within the Congress, there is a great deal of upset and amazement at how Tharoor can repeatedly be let off the hook, despite his numerous acts of commission and omission. It has led to increased speculation on who his godfathers and patrons in the party are with one senior leader going to the extent of wondering whether Congress is waiting for its own equivalent of 26/11 before kicking him out, similar to the fate of Shivraj Patil who continued for 4 years despite all the criticism against him but had to finally go when 26/11 happened.

There is also a mood of betting in the congress party that despite the income tax raids and other investigations, there is very little that will come out with so many big names and big corporate houses involved.

As one congress leader quipped, "A party and government that does not have the will to show Tharoor the door despite the visible writing on the wall, can certainly not be expected to take on the big names and big banners' as the big ticket IPL circus continues with very little tremors.

The nexus of sports, business, and politics

The curious case of Tharoor and Kochi franchise