Increasing trend of H1N1 in India: WHO 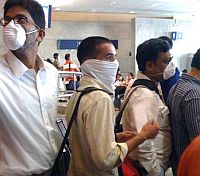 Even as India is grappling with the H1N1 which has claimed over 165 lives in the last two months, the World Health Organisation has said there is an increasing trend of the pandemic in the country.

In its recent update on the deadly disease, the United Nations agency, on its official website, said, "In the tropical regions of Asia, respiratory disease activity remains geographically regional or widespread but the trend is generally increasing as noted in India, Bangladesh, and Cambodia."

The WHO has already termed as highest the number of fatalities due to swine flu in India as compared to other countries, according to the health ministry sources here.

Contrary to India, the agency said, in the temperate region of the southern hemisphere (represented by countries such as Chile, Argentina, Australia, New Zealand, and South Africa), influenza activity continues to decrease or return to baseline.

Noting that an average of two private health care facilities were visited by the patients in India prior to coming to the designated government hospital, the WHO said 44 per cent of the fatal cases had a known underlying condition such as diabetes, lung or heart disease or AIDS.

However, the WHO has still categorised as moderate the intensity and the impact of the swine flu in India so far. The agency, which is issuing guidelines from time to time to reduce the impact of the pandemic, has recommended closing down of schools to slow down the spread of the virus.

"School closure can operate as a proactive measure, aimed at reducing transmission in the school and spread into the wider community," the agency said. The WHO also said the main health benefit of "proactive school closure comes from slowing down the spread of an outbreak within a given area and thus flattening the peak of infections."

Source: PTI© Copyright 2021 PTI. All rights reserved. Republication or redistribution of PTI content, including by framing or similar means, is expressly prohibited without the prior written consent.
Related News: WHO, India, H1N1, World Health Organisation, United Nations
SHARE THIS STORY
Print this article