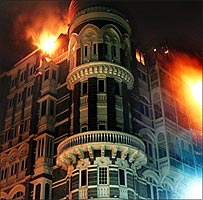 The chairman of a private bank, who had been taken hostage by terrorists at Hotel Taj on the fateful day, recounted his gripping escape to the special court that was hearing the terror attack case on Thursday.

Ajmal Kasab, the lone terrorist who was caught alive, and two others are accused in the case.

The banker, whose name was not revealed, told the court that his captors had whipped him and asked him about his profession.

"They (terrorists) asked me whether I was an architect or a scientist, but I told them I was a teacher..."

"Hearing this, one of the terrorists who was speaking on mobile, told the person at the other end that I was a teacher... After some time he got angry and said, 'How can a teacher with a salary of Rs 25,000 stay at the Taj?'

"And then they whipped me," he said.

When the court asked him with what he had been whipped, he said it seemed like a rope. "I could not do anything, as I was lying on the ground, face down," the banker-witness said.

The banker is first of the hostages at Hotel Taj to depose before the special court.

The witness had been staying at room number 632 of the hotel. Before the terrorists had entered his room, the banker had been alerted by the hotel reception about an "emergency" situation outside. He had also seen reports of the terror attack on television, he said.

At around 11 pm that night, there were knocks on the banker's door with the words "room service", but he chose not to open.

"Suddenly I heard gunshots outside the door, and the door was flung open. Two gentlemen came in. One of them held a gun to my head while other struck a blow to my neck," he recalled.

The terrorists then took the banker outside and made him knock on other doors. However, there was no response.

The two terrorists then pushed him back to his room and asked him to remove his kurta-pyjama. "I was hesitant, but they hit me, so I followed," he said.

The witness, a non-executive chairman of a private bank, then told the terrorists that he was a professor at a Bangalore university.

"They did not believe that I was a teacher and struck me. They asked whether I was a smuggler, to which I said no. All through, one of the terrorists was speaking on a mobile phone and was seeking instructions from other end," the banker told the court.

The captors saw the sacred thread around his torso, and asked him if he was a Brahmin. However, by then he broke down and told them that he was a blood pressure patient.

"Four hotel boys were brought to the room by two other terrorists. They too were interrogated. We were five hostages and four terrorists in the room," he told the court.

At around 2 am, the terrorists took them to a floor below, to room number 520.

An hour later, the banker said, they heard a blast. When they looked around, the terrorists were not seen.

"I managed to free himself and then freed the four hotel boys. The hotel boys tied blankets to make a rope and climbed down from a window. But I was nervous, so I instead took the stairs and went down to the third floor," he said.

The banker saw light in one of the rooms, and entered it when he saw fire brigade snorkel entering the window from outside.

"At around 6 am on November 27, I was rescued by fire brigade officials," he told the court.

Image: A file picture of Hotel Taj during the terror attack in November 2008

Source: PTI© Copyright 2020 PTI. All rights reserved. Republication or redistribution of PTI content, including by framing or similar means, is expressly prohibited without the prior written consent.
Related News: Ajmal Kasab, Bangalore
SHARE THIS STORY
Print this article

Staying at Taj was a 'message' to terrorists: Hillary