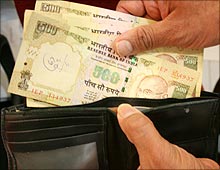 Vicky Nanjappa reveals how thieves working for Pakistan's ISI stole the template for Rs 500 and 1,000 currency notes, to improve the quality of fake currency being printed across the border.

So dependant are Pakistan-based terror outfits on fake currency they recently stole a secret template India used to print its currency.

The Central Bureau of Investigation is currently probing the theft with the help of the Directorate of Revenue Intelligence, the Reserve Bank of India and the Central Forensic Science Laboratory.

The CBI and sources in the Intelligence Bureau say certain security features of the template were stolen to enable the printing of Rs 1,000 and Rs 500 currency notes. The investgators are certain that the theft has the fingerprints of the Pakistan military's Inter Services Intelligence directorate.

Sources told rediff.com that the ISI relies on local gangs to undertake such assignments. IB sources say they are also probing if fugitive gangster Dawood Ibrahim's henchmen were involved in the crime.

Investigating agencies also do not rule out in-house involvement. They suspect the ISI's Indian contacts penetrated the establishments responsible for printing currency and obtained information.

IB sources say the operation to steal the security features of Indian currency was two years in the making.

After stealing the template, the manufacturers of the fake currency also changed the quality of paper used for printing. Earlier, they used paper manufactured in Pakistan out of wood pulp. Today, the paper is imported from abroad and resembles the paper India uses in its currency.

IB reports allege that the ISI convinced the Pakistan government to import the currency standard printing paper, which the ISI diverted towards printing fake currency.

Indian intelligence sources point out that some Pakistan officials are aware of these activities since much of the fake currency is printed at government presses in Quetta, Lahore and Peshawar.

Once the notes are printed, the ISI transports them to Nepal, Bangladesh and Sri Lanka. Agents hand over the notes to individuals who smuggle them into India where it is exchanged on a 2:1 basis. That is, two fake rupees are exchanged for one genuine rupee.

The interrogation of a gang arrested recently in Uttar Pradesh revealed that most of the fake currency is being brought into India through Nepal. Women are often used to transport the notes to lower suspicion at border checkpoints.

Investigators say the thread in the freshly printed fake currency notes are no longer hazy; the watermarks, the Ashoka Pillar, Mahatma Gandhi's image, the denomination and the RBI mark are more prominent.

The sprinkled dots are harder to identify when held against ultra violet light; also, the new fake notes ensure better visibility of the superimposed digit when held horizontally.

Some Indian observers estimate the fake currency in circulation at Rs 169,000 crore (Rs 169 trillion), a figure the RBI denies.

Apart from funding terror operations in India, the fake money is used in real estate transactions.

The fake money has also entered the banking system. Investigators say an individual who wants to deposit fake currency will ensure that s/he does so when there is a crowd at the teller's desk. Since the teller is too busy to check every note, the fake currency gets deposited, and into the Indian banking system.

The National Crime Record Bureau states that 1,170 cases of fake currency were registered last year, a decline from the 2,204 cases registered in 2007.

The CBI is investigating 13 cases pertaining to fake currency. All 13 cases have international ramifications involving the ISI.