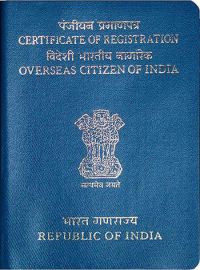 Dr Sujit Pandit of Ann Arbor, Michigan, got off lightly at the hands of immigration officials in India, in comparison to seven- year-old Viraj and three-and-a-half-year-old Vrishabh, who three years ago were deported within two hours of landing for not carrying their old passports.

Pandit was granted a 72-hour temporary visa, though he had forgotten to bring along the old passport with the 'U' visa given on the basis of the Overseas Citizens of India Card.

Back home in the United States, an embittered Pandit began e-mailing various people about his experiences.

"The response was amazing," said the septuagenarian Pandit, a professor emeritus at the department of anesthesiology at the University of Michigan, pointing to the 400 supportive e-mails he received within days. Most of the correspondents sympathised; some narrated even more harrowing experiences.

"Even now, I am getting e-mails," Pandit says. "So clearly, this is a major problem that the officials refuse to acknowledge. When we have the OCI Card with us, what is the need for another visa in the passport, creating all these confusion?"

That is the crux of the problem -- the OCI Card, a cornerstone of the Indian government's policy towards the diasporas, is seemingly mired in confusion, with immigration authorities clearly unaware of the government policy.

"The current OCI/PIO (Person of Indian Origin) rules are irrational and confusing, and often causes hardship to travellers," Pandit points out.

"The bureaucrats and politicians do not like to change any rules unless there is overwhelming pressure from the public. I know it was my mistake for not taking my old passport with the visa sticker, and I will never make the same mistake again," he said.

The point Pandit drives at is that the government had announced that holders of OCI/PIO cards do not require any other visa to enter India -- therefore, as per rules he was not bound to carry his old passport, containing the Indian visa.

Pandit reached Kolkata on June 20 on a Singapore Airlines flight, and when he showed his US passport and the OCI Card, the immigration officer asked for the visa -- which, in this case, was attached to his expired passport.

The immigration official merely needed to check the OCI Card against his database. Besides, Pandit points out, the U visa merely contains the same information as the OCI Card.

However, Pandit was detained for two hours inside the airport before the officer finally allowed him to stay in India for 72 hours, while asking that he report to the foreign relations regional officer in the city. He also retained Pandit's passport.

"During all that time I had no opportunity either to approach his superior officer although I asked for it, or to contact my relatives who came to the airport to receive me. Why would a citizen need a visa to enter his own country? I thought I had a dual citizenship for both the US and India -- otherwise, what is the difference between an ordinary foreigner and an OCI Card holder?"

Pandit finally had to call a friend in Ann Arbor who went to his house, got the old passport and sent the scanned copy of the passport and visa by e-mail.

On the third day, he went to the FRRO, but the officer there dismissed the e-mailed documents and asked that he get the actual passport within seven days. "He told me it was only out of "pity" that he was allowing me to stay in India for seven more days," Pandit recalls. "He was totally unimpressed by either my status as a professor emeritus or my age."

The couriered passport arrived in three days, and Pandit's niece took it to the FRRO only to find that the airport official had not submitted the passport he had seized from Pandit. It was only 12 days after his arrival in the country that the confusion was finally sorted out, and Pandit was reunited with his impounded passport.

Contrary to the government's claims, the OCI Card has no value, Pandit says. "It is just a piece of expensive junk. You still need a visa every time you travel to India, whether or not you possess an OCI card -- the only difference is that for the high price of getting an OCI Card, you can get yourself a 'lifelong' visa."

Though the Indian embassy in Washington, DC, did not respond to requests for a clarification, an official at the Indian consulate in New York, on condition of anonymity, responded, only to lay the blame on Pandit.

Asked what purpose the card served, the official said, "The OCI card is meant to avail of facilities available to OCIs while in India, whereas for entry into India all OCI Card holders should be in possession of the passport on which the life-long visa has been pasted."

The official commended the Kolkata immigration official, and pointed out that he would have been right to have sent Pandit back on the next available flight, as has happened in other instances.

Pandit points out that the OIC Card, to be worth the trouble and expense of acquiring one, should function like a Green Card -- once you have it, you should not require an additional visa. "Some especially from England and Canada told me that they have PIO cards and had never had to show their visa," Pandit says.

"And the OCI is supposed to be the upgraded version of the PIO card!"

One person e-mailed Pandit to point out that for his family including his wife and three children, he currently had to carry 15 travel documents when going to India -- five old passports, five current passports and five OCI cards.

The solution, Pandit says, is simple: "When an individual has a US passport and an OCI Card, production of a visa should not be insisted upon because the existence of a valid visa is implicit in the OCI card, which may be deemed to be a certification higher than the visa itself."

Image: An image of a Overseas Citizen of India card

Covid+ve report not needed to get hospitalised: Govt