PM rules out use of armed forces against Naxals 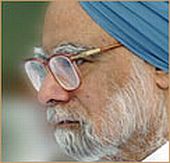 Refusing to bracket Naxals with terrorists, Prime Minister Manmohan Singh on Sunday ruled out the use of armed forces against them and said that the government is willing to hold talks with them if they abjured violence.

"They (Naxals) are banned organisations and are covered under Unlawful Activities (Prevention) Act," he said replying to a question if the government proposed to declare the ultra-left groups as terror outfits.

"We are not in favour of using the armed forces against the Naxalites. The para-military forces and police are adequate (for counter-Naxal operations)," he told mediapersons in Mumbai and underscored the need for looking at the causes of alienation of the people, particularly the tribals.

While terming Naxalism as the biggest internal security threat, the Prime Minister said dialogue with them was possible only if they shunned violence.

"Why the Naxalites alone, the government is prepared to have a dialogue with even the terrorists in Jammu and Kashmir if they abjure violence," he said.

Voicing concern over Saturday's audacious Taliban assault on Pakistan Military's General Headquarters in the garrison city of Rawalpindi, the Prime Minister said, "People and government of Pakistan should realise the great harm and (their) patronisation of terrorist groups have done to the South Asian region."

"The situation in our neighbourhood -- in Pakistan and Afghanistan is not as it should be. Rising role of terrorist groups is a matter of concern for us," he said.

Singh refused to be drawn into any controversy over Central Bureau of Investigation's decision seeking closure of the case against Italian businessman Ottavio Quattrocchi in the Bofors gun deal.

"It is not proper for me to comment on CBI petition for closure of the case as it is sub-judice, but we acted on legal advice from Attorney General, Solicitor General (which was) endorsed by the Law Minister," he said.

Maintaining that the worst of price rise was over, the Prime Minister ruled out announcement of any fresh farm loan waiver and hoped that the Rabi crop would be normal.

He also described as 'improper' the Maharashtra-for-Marathi campaign by Maharashtra Navnirman Sena leader Raj Thackeray, saying, "I feel sorry. I am confident the people of Maharashtra will give him a befitting reply."