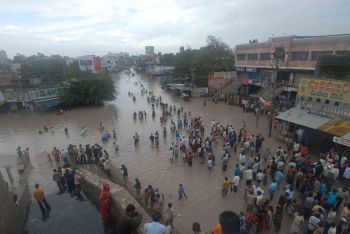 Fearing the deterioration in the flood situation in and around Vijaywada, the Andhra Pradesh government on Friday night ordered forcible evacuation of people from low-lying areas to safer places. Additional police forces and buses were sent from the neighbouring districts of East and West Godavari to the city.

As the water inflow at the Prakasham barrage has been increasing rapidly, Vijaywada faces an imminent threat of flooding. State Revenue Minister Dharmana Prasad Rao said the 60 island villages along river Krishna have been identified for evacuation.

Andhra Pradesh is facing the worst ever floods in its 60 years, as 60 per cent of Kurnool district was submerged on Friday leaving thousands homeless and stranded without food and water.

Though officials said the death toll in the last three days has been 27, it is feared to be much higher, as over 100 people were reported missing from different places -- including 14 in Kurnool district alone.

State Chief Minsiter K Rosaiah said he had spoken to Prime Minister Manmohan Singh and United Progressive Alliance Chairman Sonia Gandhi and briefed them about the situation. "I have also spoken to Defence Minister A K Antony and on his instructions, the defence secretary was in touch with the state chief Secretary," he said.

The chief minister said either Gandhi or the prime minister would visit the state on Saturday.

Gandhi has also spoken to Maharashtra Chief minister Ashok Chavan to help the Andhra Pradesh government in dealing with the situation. Rosaiah said he had received offers from Karnataka government also.

With torrential rains continuing unabated, and water flowing in from the upper reaches of Karnataka and Maharashtra into Krishna, Tungabhadra and other rivers, the water level of major irrigation dams, including Srisaialm and Nagarjuna Sagar, has reached the alarming levels.

The state government has pressed the Indian Air Force, Navy and Army into service for relief and rescue operations. Around 120 armymen with boats have already entered the fray in Kurnool, where 30 colonies are reportedly under water.

Eight navy boats with personnel are on their way from Visakhapatanam to Vijaywada, where a red alert has been sounded.

Member of Parliament from Kurnool district Kotla Surya Prakash Reddy and local legislator T G Venkatesh were forced to vacate their places with water entering their homes. Many people expressed anger over the lack of rescue and relief operations and hundreds of families were seen moving out on their own from flooded areas.

Nearly two lakh people have been evacuated to relief camps in the worst-affected districts of Kurnool, Mehbubnagar and Krishna district.

The gates of several projects on the Krishna river -- including Jurala, Srisailam, Nagarjuna Sagar and Prakasham -- have been opened to release the flood water.

While the inflow into Srisailam reservoir has touched an all-time high of 21 lakh cusecs, 10 lakh cusecs of water has been discharged from Srisailam and Nagarjuna Sagar reservoirs.

Rosaiah has warned that Vijaywada might face a flood situation from Friday night or Saturday morning. The administration of Kurnool, Mehbubnagar, Nalgonda, Guntur and Krishna districts have been put on high alert and have been asked to evacuate the people from the low-lying areas along the course of the river Krishna.

"This is a never-before-seen situation. Never in the past has the Krishna basin witnessed such floods and inflow of water into the dams. I am urging the people in the low-lying areas not to take the threat lightly. Move out to the safer places and cooperate with the officials," said the State Revenue Minister Dharmana Prasad Rao in Hyderabad.

The state government has opened the special control rooms in the affected districts and has sent ministers and officials to supervise the relief operations.

Traffic has come to a halt between Hyderabad and Kurnool as the national highway no 7 has cracked at several places and floodwater has been overflowing on the Beechupally highway.

Thirty-three trains have been diverted or stopped.