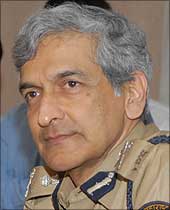 Some of the top Mumbai police officers have been accused by their former boss of dithering from "responding to the situation" during the 26/11 attacks. Hasan Gafoor, the then Mumbai Police Commissioner, said, "a section of senior police officers refused to be on the ground and take on the terrorists. By doing so, they chose to ignore the need of the hour."

"Yes, there was dearth of eagerness on the part of a handful of senior officers to be on the ground during those days," said Gafoor, replying to a question if he noticed a bit of unwillingness among the senior officers. Now Director General of Police (Housing), Gafoor received a lot of flak from the Ram Pradhan Committee, which probed into how the security agencies responded to the deadly terror strikes that claimed more than 180 lives. It had observed that command and control was not properly exercised during the handling of the attacks.

Asked how he felt when let down by his own men and if there was a bigger embarrassment, Gafoor said "yes there was, indeed. On November 28, I attended a meeting with the DGP and Home Minister. I was told to withdraw the NSG and instead use the Mumbai police for the ongoing operations. "The DGP told me that the entire world was watching us and so we should put an immediate end to the siege and help defuse the crisis. This sounded ridiculous, as the NSG is an elite force that can tackle such crisis situation. I said it was even preposterous to even think of taking off the NSG," Gafoor said.

Recalling the events that took place on November 26 last year, Gafoor said "the first thing on my mind was, of course, to liquidate the terrorists or to restrict and compel them to a corner and then cordon off the targeted area -- all this to engineer the safe evacuation of the people trapped inside."Lauding the NSG for doing a "great job" in eliminating the terrorists, the former Mumbai Police Commissioner said "without them it would not have been possible to even map the terrorists' movement inside those built-up areas, let alone take them head on and overpower them ultimately." Asked if believes that he was made a scapegoat, he said, "I cannot comment on that. But yes, political considerations do play a part in lot of things that are decided and ratified. It is politics and much more beyond."

12 killed in landslide in Mumbai