News
Business
Movies
Sports
Cricket
Get Ahead
Money Tips
Shopping
Sign in  |  Create a Rediffmail account
Rediff.com  » News » Voter's voice: 'Is a clean record too much to ask?'

Voter's voice: 'Is a clean record too much to ask?'

With elections to the 15th Lok Sabha just weeks away, rediff.com's reporters speak to voters across the country to find out what's on their mind. 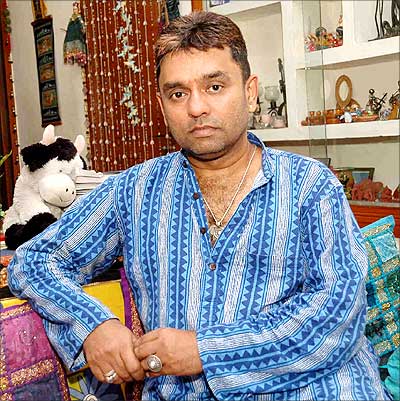 Sunil Menon, 42, is a fashion choreographer and an HIV/AIDS activist in Chennai

I do have a vote, and I have been voting regularly. Yes, when I first became eligible to vote, I was not that bothered but as I grew older, I understood the importance of voting. But the problem is, most of us in India do not go to vote, and then complain about the government. Those who do not vote have no right to complain. If you want to make a difference, you have to vote. Here, if you do not vote, others come and vote in your name. We should not let that happen.

I was impressed with the young group of IITians who came together and formed a party (Lok Parithran). I would like to support such people.

The issue I am concerned about is environment but I know none of the political parties here are interested in environment. Any party that comes to the power has to deal with terrorism and price rise; there is no escape. I find no party responsible. Terrorism is there and will be there whether X party is in power or Y party is in power. If the terrorists want to strike, they will strike because we are such a huge county and there are bound to be loopholes. I feel you can't find fault with anyone on that front.

I am totally disappointed with the Manmohan Singh government. I am appalled and shocked by the way the Mumbai terror attack was handled, and the way he reacted to it.

Price rise is another issue I am totally disappointed with. The job market is bad. I am a freelance artist and I really feel the pinch these days. There is a kind of uncertainty in our lives. You don't know what is round the corner.

I want to see a new breed of politicians. I want a breath of fresh air. I can't think of a single political person who can bring in fresh air. But I admire a lot of social reformers and you need people like Baba Amte, Vinobha Bhave, etc. I wish they had gotten into politics as they might have made a difference.

Today, I can only think of A P J Abdul Kalam and I adore that man and I have utmost respect for him. It was very shameful the way the Congress treated him, and I am ashamed of that. He is such a noble soul and he deserved better treatment.

India is very famous for dynasty. You look at any field, you see dynasty ruling. Look at the film industry; you see star sons and daughters entering every other day whether they have the ability or not. So, I am not surprised when dynasty rules in politics too. Why do Indians hang on to the Nehru-Gandhi family? The Congress party can't think beyond the family. It is sad that the Congress has to bank on the inexperienced Rahul and Priyanka for its future.

One thing that is urgently needed is, clean our electoral system. We cannot allow criminals to get elected. I do not want the candidate to be a graduate or anything like that. The basic qualifications needed should be, he should have a clean record. Can't we hope for at least that? Is it too much to ask for?

Shobha Warrier in Chennai
SHARE THIS STORY
Print this article