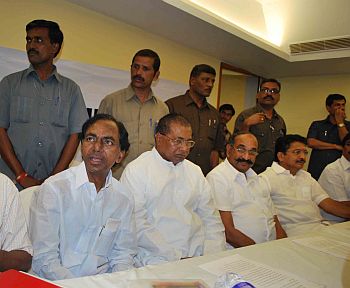 The unity of political parties in Telangana to fight for separate state has proved to be short lived with main opposition Telugu Desam Party parting ways with the Telangana Joint Action Committee and forming its own Telangana Sadhana Samiti.

Even as JAC, comprising the Telangana Rashtra Samiti, Congress, Bharatiya Janata Party and other people's organisations met in Hyderabad to chalk out the future course of action, TDP President N Chandrababu Naidu lashed out at TRS holding it responsible for Thursday's attack on his senior party colleague N Janardhan Reddy.

Janardhan Reddy, a senior legislator from Telangana region, was assaulted by some miscreants in Osmania University campus when he had gone there along with other TDP leaders to extend support to the agitating students.

Naidu said, "The attack was pre-planned, and it was hatched by the TRS President K Chandrasekhara Rao to weaken the TDP". He said that the attack on a senior leader like Janardhan Reddy was shocking beyond words.

Condemning the attack on the houses and properties of Andhra settlers in Hyderabad, Naidu said that the TDP was committed to protect them from any such attack.

Taking a cue from their leader the other TDP leaders from Telangana region also declared that they will not be part of Joint Action Committee, which had TRS in it.

E Dayakar Rao said that chairman of JAC (Prof Kodanda Ram of Telangana Intellectuals Forum) elected unilaterally by the TRS and the TDP leaders, who had attended the JAC meeting on Thursday, was not given due respect or importance.

Later, at a meeting of TDP's Telangana leaders with Chandrababu Naidu, the party decided to form Telangana Sadhana Samiti headed by N Janardhan Reddy to spearhead the movement for Telangana state. The move came as a surprise because Naidu has so far remained noncommittal on whether he will support Telangana or not.

TDP leaders in Andhra and Rayala Seema region were in the forefront of agitation against Telangana state. Naidu first having promised the support to Telangana resolution in assembly backed off after Chidambaram's first statement on December 9.

When asked by the media persons about TDP's stand on Telangana on Friday, Naidu evaded reply by saying: "It is a sensitive issue, which has been complicated by the Congress and only the Congress should solve it".

The TRS and Congress, on the other hand, have strongly denied Naidu's allegations that TRS was responsible for attack on Janardhan Reddy.

"We were not even aware of his visit to Osmania University. I was sitting in Joint Action Committee meeting before media when the incident happened. I have strongly condemned it. Janardhan Reddy is my close friend. We have worked together as ministers and legislators," Chandrasekhara Rao said.

He alleged that Naidu was hatching a conspiracy to create a divide among the leaders of Telangana region. He urged TDP leaders from Telangana to understand Naidu's game and come forward to join JAC for a united fight for Telangana.

Former minister and Congress MLA R Damodar Reddy also denied the allegations against TRS and appealed for unity among all Telangana leaders.

'BCG vaccine can be a gamechanger against COVID-19'

Down with COVID-19, UK PM spends 2nd night in ICU