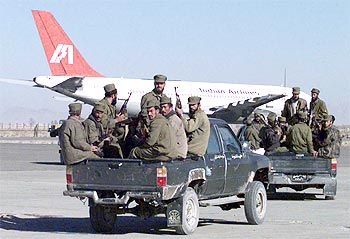 A decade after the hijacking of an Indian Airlines plane, the chief Indian negotiator who engaged the hijackers blamed the then government for its 'diplomatic failure' in their inability to make the United States and the United Arab Emirates use their influence to help secure a quick release of the passengers.

A K Doval, the 64-year-old former Intelligence Bureau chief, who led the four-member negotiating team to Kandahar, even went to the extent of calling the 'diplomatic failure' a 'bloody disgrace' for India.

He regretted that the government was unable to put up an effective case about the hijack crisis before the international community.

The Indian Airlines Plane with 174 passengers and a 11-member crew on a flight from Kathmandu to Delhi was hijacked on December 24, 1999 while it was flying over Lucknow.

The crisis ended on December 31. Doval in an interview to PTI on Thursday was candid enough to say that 'no one worth any consequence was contacted either by the (then) foreign minister (Jaswant Singh) or the (then) foreign secretary (Lalit Mansingh).'

"There was a diplomatic failure on our inability. When we know that the US is totally against the terrorists, they are against the Taliban, they had total hold over the UAE, we could not leverage this thing. Our ambassador could not even get inside the airport (in Abu Dhabi)," Doval noted.

"We should have been able to do this thing...the engagement should have been done at the highest level. If need be, the prime minister (could) have talked to the president of America and tell him that the plane is in Abu Dhabi, which is practically an US airbase in the middle," said Doval, the first police officer to have been decorated with second highest military award--Kirti Chakra--in 1988.

The hijacked plane first landed in Amritsar before flying to Lahore in Pakistan and later to Al-Minhat air force base in Abu Dhabi before heading towards Kandahar International Airport by the crack of the dawn the next day.

Doval said the US, which is in the forefront in the fight against terrorism, should have been clearly told about the unholy link between Taliban and the Harkat-ul-Ansar militants.

After all there were foreigners also on board the ill-fated plane to make them interested, the IPS officer, who negotiated with terrorists for 110 hours, said.

"...When it came to Lahore, the US pressure could have worked...I can understand that we can't leverage US pressure on them to take action against the Pakistan government....now American support to us in fighting terrorists should not be something which is a question mark," he said.

The former intelligence chief also went on to say that possibly the American ambassador to India at that point had not been even contacted.

"Jaswant Singh ji says that he did a lot...but no one worth any consequence was contacted either by the foreign minister or the foreign secretary," he said.

India did not make an issue with the foreign countries opposing terrorism, he said, while terming the negotiations as casual and stressed that 'it should have been made an issue.'

As the nation remembers the tragic ordeal which began on the Christmas eve, Doval took a hard look of lessons learnt from the entire hijacking episode which kept the country on tenterhooks for a week.

They succeeded in their plans and secured release of terrorists Maulana Masood Azhar, Sheikh Omar and Mushtaq Zargar in exchange for 158 people. One passenger Rupin Katyal was killed by the hijackers and his body was handed over at the Abu Dhabi air base.