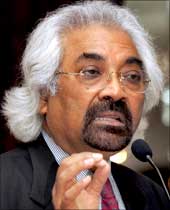 Telecommunications icon and entrepreneur Sam Pitroda, who is the chairman of National Knowledge Commission, tasked with building excellence in India's education system to meet the challenges of the 21st century, has said India faces serious problems in its higher education system and that unless it is alleviated expeditiously, the Indian march to become a major global player could be adversely impacted.

Pitroda, keynoting a major seminar on Higher Education Policies in India, China and the United States organized by the Bridging Nations Foundation in Washington, DC, pointed out that, "Higher education has been key to India's growth in the last couple of decades," and it was all thanks to the country's founding fathers, who recognized the role higher education would play."

Thus, immediately after independence in 1947, he said, they had put in "a great deal of effort on building new institutions like the Indian Institutes of Technology, Indian Institutes of Management, building universities and at the same time investing lots of money on research and development," for agriculture, medical research, scientific laboratories, atomic energy, space and so forth.

"And, the result of all these investments and continuing investments thereon, we have been able to provide the kind of manpower in India for 8-9 percent of the growth we have had in the last several years," he said.

But now, Pitroda lamented, just when India is poised for take-off as a major global power, "We have serious problems and we do have skill shortages. Serious problems that have come out of the fact that we really don't have enough capacity in our higher education to meet the needs of today as well as tomorrow."

He said that dealing with some of the serious issues of higher education was a major priority of the Knowledge Commission, which was set up four years ago by Prime Minister Manmohan Singh.

Pitroda emphasizing the lack of capacity when "you really look at higher education overall in India," said that as much as expanding this on the one hand, "on the other hand, the quality of education needs to be improved substantially."

"Leaving aside cost savings of 5-10 percent or even less, the overall quality of education needs to be improved substantially," he reiterated, while acknowledging that the third issue that has to be addressed "is really the access to education. We have to make sure that the poorest of the poor do get an opportunity to education."

Pitroda said that these were the three broad categories "under which the Knowledge Commission started looking at recommendations for higher education."

At the macro level, he said, "We have to create more universities," and argued that "the roughly 400 universities that we have is not enough for a country of a billion people. Roughly 8 percent of our eligible children have the opportunity to enter the higher education and that number ought to be closer to 16 or 20 percent."

"So, we need to expand more colleges, more universities, more research programs, more teachers, more facilities, so on and so forth," he added.

Pitroda said in this regard, "The overall expansion requires not only participation from government, but also participation from the private sector and we thought the need as a result to create a regulatory framework for the higher education," which meant moving beyond the current University Grant Commission and the All-India Technical Education board.

"The key is to really make sure that the entry is simplified and quality is monitored carefully," he said, and added, "Today, in our system, entry is very difficult. If you want to create a new university or college, it is very complicated to get all the permission. Once you have created one, it is perhaps the quality that has to be monitored."

Pitroda said that in order to change this system and creating this single body for higher education, the government had appropriated significant amounts of monies, but he asserted that "no amount of increase in public spending will meet the demand we have in the country. So, we need a diverse source of financing of private funding and all kinds of other ways and means of getting funding."

"But, the real push has to come from the government," he acknowledged, "and as a result of all the work that the Knowledge Commission has put in and the need in the country, the government of India has decided to spend $67 billion on education in the 11th plans for five years."

Pitroda said that this figure "is essentially five times more than has ever been spent in the history of India. This offers a unique opportunity to expand higher education."

"So, we want to create a system where all these colleges can be separated from the universities and create community colleges where we can provided gradation in the university system."

Pitroda said, "India is so complex, so diverse," a one size, fits all system to higher education would never take care of the country's needs in this sphere.

He also said that it was a no-brainer that technology has to play a major role in higher education, and bemoaned that for all of India's information technology prowess and technological skills, this had hitherto not been an effective catalyst in being a boon to the progress of high education.

So, he said, going forward technology would be incorporation aggressively into everything from course work, remote access, systems learning, improving contention, resource management for universities to be more productive.

"It is going to be a key driver and as a result the government of India has decided to spend several billions of dollars on building national knowledge networks," Pitroda said. "This will connect 5,000 locations with technology facilities to all our universities, all major libraries and all major R & D centers, such that universities would create their own local area networks."

He said that these plans had already been approved and the implementation would begin shortly, and predicated that with "broad-band connectivity," and massive band-width, "We will bring classrooms closer to students by sharing teachers and by sharing many other resources."

Pitroda also acknowledged the need to "upgrade our teachers," was another no-brainer, "and we need to bring research in our universities with a focus on a research laboratories."

"We've got into a situation where most of our professors don't do research and more of our research scientists don't teach. So, we need to bridge that divide," he said.

Pitroda conceded that "we do recognize that it's a long road and we do need partnership with international institutions. So, we are working on a bill for foreign universities to participate in India."

He also explained that "we do have several programs where private businesspeople want to build universities and all of this work is going on. We need expansion not only in technical education, but also in liberal arts. We don't have very good liberal arts universities of international standard."

"We need better education, and we do need new courses, new contention, new delivery standards," he added, and reiterated that "we are hoping to rely heavily on information communications technology because we cannot scale without the use of technology."

Pitroda argued that "the model that we have seen in the western world is too expensive -- not scalable and not sustainable in India."

But he spoke of the demand for higher education in India, which was manifest in "close to 100,000 of our students go abroad and pay $30,000 a year for tuition."

He said that "supply is not just out there and the only way we can meet supply and demand is to really open up the system a little more and create a level playing field -- invite private partnerships but at the same time increase government spending substantially on higher education."

Pitroda said what India's founding fathers started 50 years ago, "has taken us to where we are today. We do recognize that in the 21st century, knowledge is going to be the key driver and we need to prepare to respond to the global competitive landscape."

"That can only happen by focusing on higher education, research and development, intellectual property and new tools and new technologies."

Pitroda declared that "we hope that the journey we are starting now in the next 10-15 years, will give us new platforms for higher education in India."