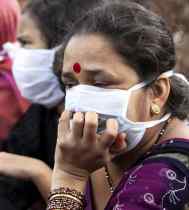 A toddler and two middle-aged persons have succumbed to swine flu in Maharashtra, Karnataka and Gujarat, pushing the pandemic toll to 72, even as schools and colleges in Pune, shut due to the spurt in the infection, reopened on Monday after nearly two weeks.

The two-and-a-half year-old child, who was suffering from a liver disorder, was admitted to the Command Hospital in worst-hit Pune on August 21 after she tested positive for the virus, health officials said. She passed away on Sunday night, they said. With the toddler's death, the toll in Pune has risen to 23 and to 39 in Maharashtra.

Sarojamma, 50, was admitted to Thirumala Hospital in Bangalore on August 15 and given Tamiflu treatment, but she died on Sunday night, hospital sources said. Rajesh Udhad, 52, who was admitted to Wockhardt Hospital in Rajkot on August 20 after he complained of fever, breathlessness and vomiting, died on Monday morning, raising the virus toll in Gujarat to seven.

With the three deaths, fatalities due to the disease have climbed to 72. This includes Karnataka with 13 cases, Tamil Nadu and Chhattisgarh with three each, Delhi two and Kerala, Goa, Rajasthan, Uttarakhand and Haryana with one each.

Meanwhile, schools and colleges in Pune reopened today after almost two weeks of closure to prevent the spread of the flu virus.

New wave of deadly H1N1 is ready to explode